Does winning influence fan behavior, or is this season indicative of a larger issue?

Look at the last 25 years of Jazz basketball, and find out for yourself!

Share All sharing options for: Does winning influence fan behavior, or is this season indicative of a larger issue?

It's simple, really; if the team you dedicate your free time towards is kicking butt -- it's easier to support. It only follows that if your team is performing poorly, well, in that case it's much easier to find other things to occupy your time with. There are examples where a bad team has a very loyal fanbase, and where good teams have fans who couldn't be bothered. The media tells us that these examples point to the Golden State Warriors fans supporting strife, and the Miami Heat fans supporting a parade, but for the most part have better things to do. These examples are few and far between though. The Utah Jazz fanbase, one of the most rabid fanbases around, seems to have 'gotten over' this team. Either it's an economic issue (x number of free time hours a week, y number of options to spend it on), or something more troubling. The worry is that our current version of the Jazz just aren't fun to watch, and not worth investing the limited, finite, number of free time hours upon.

I think that's sad. But by looking at the team play right now it's easy to enumerate some reasons why this type of basketball isn't fun to watch. The team isn't winning. The team doesn't have any stars. The team rarely plays an exciting brand of basketball. The team loses once every five games in a blowout. And the team isn't giving the fans a lot to cheer for on the court. There are compelling story lines and exciting players. But we rarely see a Jeremy Evans alley-oop anymore. And we rarely have a reason to care. Meaningless games for a season where many fans just went numb as expectations didn't meet reality for the third season in a row.

These are just feelings though. Is there any evidence to point to here? Well, if you use 'reported attendance' as a metric this is something you can cross reference against winning percentage, arena capacity, the home record. The initial premise is that if your team is good, the fans will care more. There are subtle things to keep track of here, as a team that is fun to watch will also have fans show up. This 2013-2014 season seems to be that perfect storm of a team that doesn't win much that isn't fun to watch.

And the end results are that, well, the majority of the fans (call them bandwagon and non-die hard fans) have found other things to do this winter instead of going to Jazz games.

This is a table that shows the last 25 seasons of Utah Jazz basketball. It shows the last two seasons of the Salt Palace, all of the years we called it the Delta Center, and the present day EnergySolutions Arena. During these eras we also show the win / loss record for the season and just at home, and the reported attendance figures. 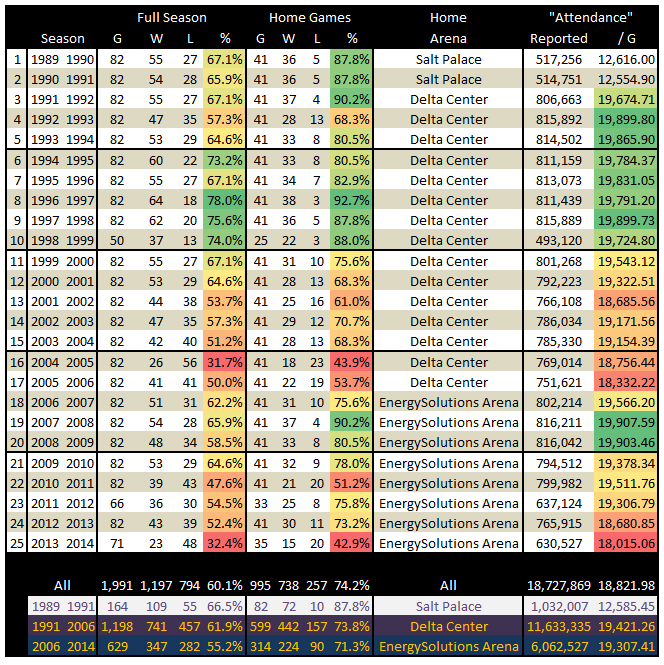 If you pay attention you see that when the team was really good, and nearly invulnerable at home, the attendance was nearly off the charts. The denouement of Stockton and Malone had the team seeing fewer and fewer fans show up. However, that crazy Jerry Sloan coached team of Andrei Kirlenko, Matt Harpring, Raja Bell, Greg Ostertag, Raul Lopez and others had fans showing up. That team exceeded expectations and had higher attendance figures than during the first few seasons of the Carlos Boozer / Mehmet Okur era. They also had more fans show up per game than one of the last Stockton and Malone years.

Showing up to games matters for both the fans and the team. If you are dominant at home fans will show up. They want to see you win games. Very few people, unless it's their fetish, want to pay good money to watch something they love get beat up.

Is there a relationship between Utah Jazz home game winning percentage and attendance averages? 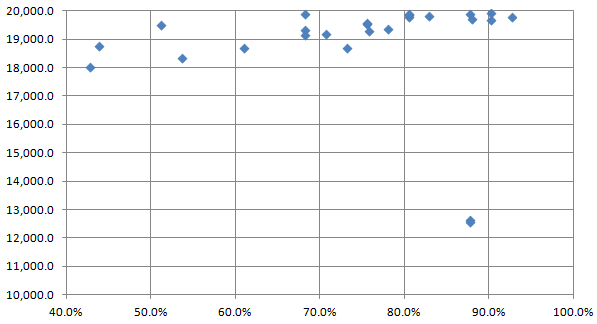 Yes, but it's hard to see here. If you throw out the two seasons of the Salt Palace (where max capacity was in the 12k range) you get an almost linear relationship. 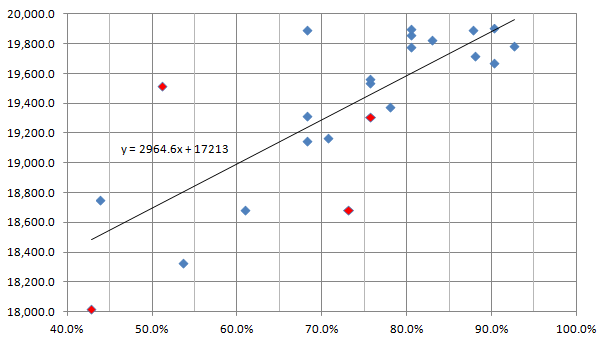 Hmmm, the better you play at home, the more people show up.

Okay, but what about the outliers here. There are examples where a less awesome team will have great attendance. These are the 'fun factor' influencers. There are a lot of other reasons beyond just fun, but also if the players are likable, or if the team is someone you root for. The best example of this was Jerry Sloan's last year as head coach / Tyrone Corbin 's coaching career start. That team was filled with interesting storylines, interesting players, the team re-loaded with Al Jefferson, Paul Millsap was becoming a star, Andrei Kirilenko was still there. Mehmet Okur and Kyrylo Fesenko, and Franciso Elson gave the fans some interesting people to root for. On paper it was a very fun team. Winning road games early against the Miami Heat made that team a team to watch.

The season ended in disaster, and the very next season attendance dropped, even if the team won more games and made the playoffs. Fun counts. Some fans didn't find watching Jazz games as fun as it used to be. The next season attendance dropped again. And from last season to this season, it happened again. In Jerry's last year capacity was 98% full. This season it's 90.5% full. It's not even been four seasons yet.

This season's values (32.4 win%, 42.9 home win%, 18,015.06 fans per game) is outside of the normative standard deviation for what we can expect. The drop in attendance is larger than normal. It's more than just because of poor play on the court. One could make the argument that it's not just the end result, but how you get there that counts. It's not an attractive product ON the court either.

Jazz fans appear to be done with this season, and the formula to plot just how done they are is y=2964.6x + 17213. It looks bad in that last graph, but if you instead plot the year by year capacity results (from Salt Palace till now) it looks worse. 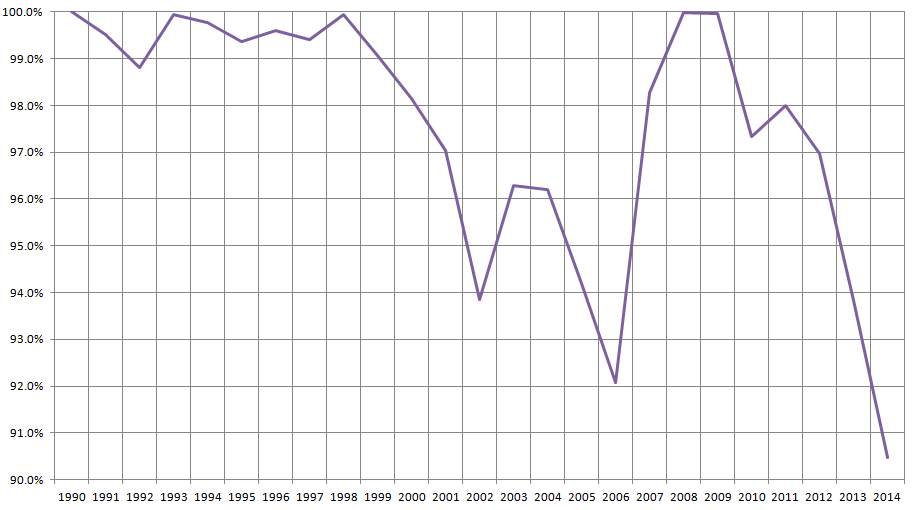 Or maybe, it looks more accurate.

Why is this happening? Well, let's look at it outside of the influence of the Utah Jazz, or how they play. People have free time, and it is limited. What has changed in the last 25 years? There are more things you can do with your free time. You could use your free time to go to a Jazz game . . . or catch up on the 4 shows you are recording on your DVR . . . or read a book you download onto a tablet computer while you take a relaxing bath . . . or chat with a new friend you met online who shares your interest in photography, or whatever it is. There's more to do now. There's even more sports in Utah now, where you RSL, minor league baseball, and college teams who play year round.

If you add money into it, well, it's a no contest. I know that for me buying a $60 video game that will give me at least 25 hours of entertainment is better than buying a ticket to a basketball game for roughly the same price, to see something that last 2 hours. At least with the video game the guy I am rooting for can WIN the game, which hasn't been the case so far this season for the Jazz at home 20 different times.

As a result, you really have to tip your hats to the die hard who love the Jazz so much they'll still go to games. Some get great seats, some find great deals. But I know a few who will only go to the game if the tickets are free.

I think that if the team was more fun to watch this wouldn't be the case. And this goes back to either winning the game, or playing a style of basketball that highlights marketable stars or is inherently just fun to watch. It's tough for the Jazz to compete against the almost limitless number of things someone can do with their free time now.

But if they want to fill those seats they are going to have to compete for people's free time. The data shows this season to be beyond the normal acceptable range for being bad. In fact this Jazz team could be the worst team by record in franchise history (well, tied for first). What we know today is that they are the least enjoyed Jazz team in the last 25 years. Which is, according to the data I receive from the PR department, Enes Kanter 's fault.