Alec Burks and Randy Foye are heading in opposite directions, who would you rather have?

A look at their current head to head, and what's ahead!

Share All sharing options for: Alec Burks and Randy Foye are heading in opposite directions, who would you rather have?

Since becoming teammates for one season, last season, the shooting guards Alec Burks (Utah Jazz) and Randy Foye (Denver Nuggets) have faced off against one another three times. Last season Randy Foye assumed control of the starting shooting guard spot and played 2,249 total minutes for a lottery team. And then he left in free agency (albeit facilitated by a sign-and-trade). Those were 2,000+ minutes that could have, and should have, rightly gone to players who play the position who would still have been on the team today -- namely Gordon Hayward and Alec Burks.

Foye got the minutes, hit it, and then quit it (it = Utah here).

In order to justify playing Foye, a noted mercenary at this point, so much and so frequently we were told that Alec Burks, perhaps, would never be as good as Foye is today. (That today being yesterday, as in last season). In reality's today (which is actually today) we have two players going in different directions. Foye is increasingly becoming that archetype of a three point shooter. He doesn't board much and we did see a slight bump up in his APG this season with the Nuggets, but he doesn't seem to have anything dynamic about his game aside from the ability to make open shots. Let's be real -- after watching the daily brick-a-thons it's a real skill, we've seen guys miss open shots all year long.

Foye is 30 years and 200 days old. He has two more years left on his contract. I can't imagine he's going to improve at all from where he is right now as a player.

Alec Burks, well, he's young, dynamic, and only getting better. We already talked about Alec Burks' poor shot selection (if he didn't try end of quarter heaves his 3pt% would be much higher), but that's something that's only going to get better as he matures. He's on his way up as a player.

And tonight we'll get another opportunity to see him and Foye go at it. In head to head competition the evidence suggests that Burks is superior. If you are going to wait for the Jazz PR team to reveal that information to you, wait another media cycle. 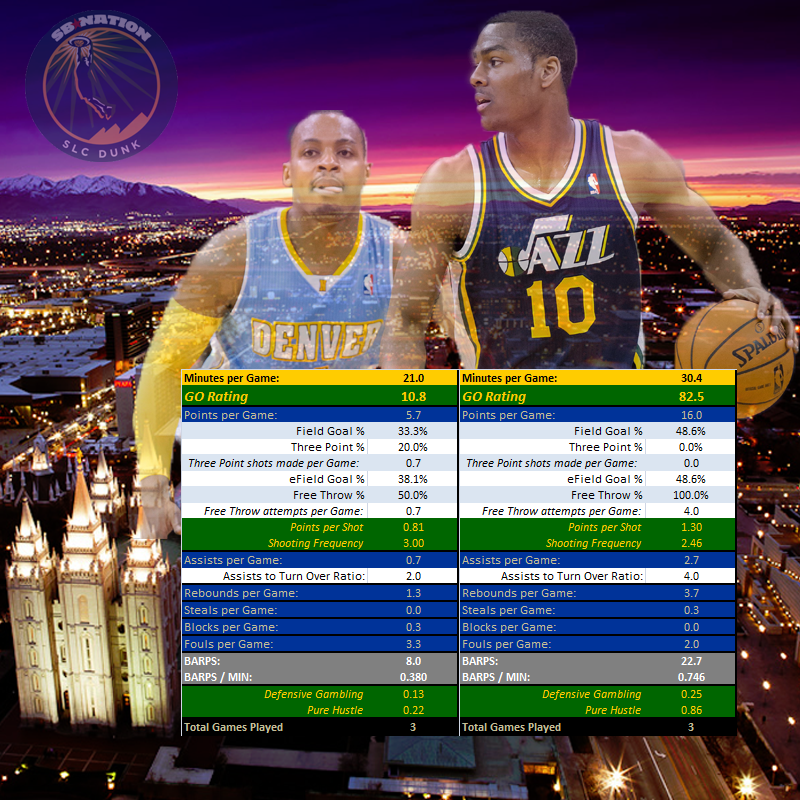 Thanks Alec Burks -- you should have been starting last year. Not Randy Foye.