Former NBA head coach Alvin Gentry appears as an improvement over Tyrone Corbin, but by how much?

Share All sharing options for: Former NBA head coach Alvin Gentry appears as an improvement over Tyrone Corbin, but by how much?

The Utah Jazz are currently head coach-less. Over the last few seasons it became obvious that it's difficult to win and consistently make the playoffs without a star. One could argue that it's harder still without a head coach. (The Oklahoma City Thunder have done okay though) The Utah Jazz are bereft of stars, and can't afford to be without a head coach either. And as a result, the most logical thing in the world is happening -- our team is making a list, checking it twice, and trying to see which coaches are naughty and/or nice.

One of the coaches on the list is Alvin Gentry. Gentry has been around coaching for a very long time. While he didn't play in the NBA, the former NCAA player started his coaching career in college after his playing days were done. He then moved onto the NBA and has been a head coach at this level during 12 different seasons. Furthermore, between his stints as the lead coach Alvin has been an assistant as well. All that said, he has only been the head coach for an entire season five different times. It's hard to be canned during the season, and it's also hard to pick up the pieces after someone who hired you gets fired. Still, the idea that Gentry is a solid coach persists despite being fired midseason a few times. (The argument here is what he did with the Phoenix Suns when they were stocked with All-Stars)

The last coach of the Utah Jazz was Tyrone Corbin. After college, Corbin was an NBA player for over a decade. He stuck with professional leagues after his playing days were up and as been either the assistant or head coach for teams either in the Developmental League or the NBA. Four seasons ago he was promoted to head coach after years of being an NBA assistant. When you look at longevity, his four seasons looks like one third of Gentry's twelve. But in terms of complete seasons Gentry only has five, and Corbin has three. So maybe we should compare these two in order to gauge what their "teams" are generally like? Both coaches were mentored by great coaches (Jerry Sloan, Larry Brown), and their first full seasons as a head coach were lockout shortened years. So perhaps this comparison will be academic at least?

To keeps things even, the data is Ty's last three years and Gentry's second season in Detroit, first two years in LA, and second and third years in Phoenix. (How is that fair? Ty was a rookie coach!) It's fair only in that these were the only jobs these two coaches had from Game 1 to the last game their team played that year. And the results, are, well, less than impressive. 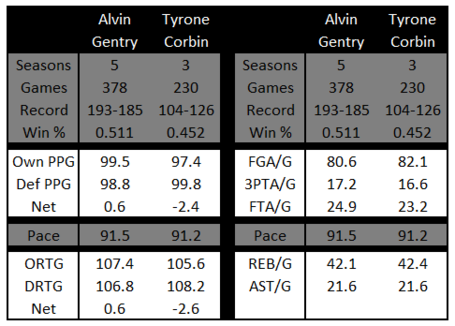 Gentry's teams win more, but a huge bump there comes from having Steve Nash. Corbin never got to coach a Hall of Famer, and as we go back to Scott Brooks, having great talent can compensate for poor coaching. The one thing this data doesn't show is the fundamental shifts in the teams Gentry has coached. In his first few stints the pace of play for Alvin's teams were much slower than that of Corbin, and those teams rarely took threes and were either good, bad, or ugly. It wasn't until Phoenix until Gentry's numbers started to go crazy.

On average, the clubs Gentry is responsible for play marginally better than what Corbin got the last three seasons. We attribute the better offense to a better diversity of shots (less FGA, but more 3PTA and more FTA). A lot of that is related to the teams he was handed by the General Manager, though.

Alvin's teams got the job done when loaded with veteran talent and experience, and in the situations where the talent was sufficient wins also followed. This includes winning playoff rounds, and conducting a group of players to work as a team, instead of a collection of individuals. The big question for Jazz fans aren't about numbers, or wins, or losses. It's about the coaching philosophy and the ability to a) have a solid game plan, and b) develop youth. The major flaw with Corbin was the desire for short term wins over long term vision. You can't fault him for trying to look good at his job (by getting wins), but you can fault him when that goes directly against the reason you have your job (his job, especially this past season, was development, not trying to make the playoffs).

Is Gentry a guy who develops young players? Can he teach defense? I have no doubt that when given stars he can make good things happen. And I appreciate the evolution of his coaching style over his many years in the NBA -- he used to be a grind it out guy for those people who weren't watching the NBA in the early 90s. One look at his rosters help explain why he evolved. While our roster for next season is a question mark the main goal isn't going to be trying to coax wins out of close games, but to make the players better.

If guys like Derrick Favors, Trey Burke, Enes Kanter, Alec Burks, Gordon Hayward (if here), and Rudy Gobert become good players then the wins will happen implicitly. The target for this franchise is to improve the playing ability, and ultimately, that's what Gentry must be investigated on.

So is Alvin Gentry that much better than Tyrone Corbin? He wins more, but has had more shots at it, and has been around coaching more. He has also had better players. It's an upgrade to get Gentry V. 13.0 over Corbin V. 5.0 for sure. But the actual improvement is harder to grade through a straight comparison of their teams' achievements. Eventually it's about the players -- and who can get the most out of them.

And that's precisely what Dennis Lindsey is trying to find out right now.