Look at the change!

Share All sharing options for: NBA Strategy: San Antonio Spurs offense has evolved, Utah Jazz must do the same

Can I be real with you guys? Let's be real. The Utah Jazz have a lot of problems, one of them seems to be holding onto the past a little too strongly. This is obviously the case for the fans as well, myself included. But for the team to get better it's important to be able to let things go. I guess in a way this is why some of the older dogs are being phased out and Dennis Lindsey, the Jazz General Manager, is allowed to hire more of his guys and do things his way.

Things were pretty backed up.

There are a few things that need to change on the court too. For one, and this is a biggie, it's our offense system. I think that bereft of the right type of players and the right type of head coach, the Dick Motta offensive system is reaching its' zenith. And it's a system that has earned zero NBA titles. (You could argue that the Dallas Mavericks used this when they used Dirk Nowitzki as a small forward, and won a title.)

One of the sacred cows has been to downplay the three point shot, despite evidence to suggest that some of our best years in the playoffs came when we were actually making that shot reliably (finals years, and that one year where Mehmet Okur was healthy in the playoffs). Since the 90's started the fundamental distrust of the three had started to wane. Teams that relied on it too heavily were hit or miss. But there had to be a sweet spot where using it garnered a benefit for the team.

One team that seems to have figured that out is the San Antonio Spurs. If you started following the Jazz in the 80s like I did the Spurs are a surprise. The Jazz used to routinely punk them every year, in the regular season and in the playoffs. And then they got Tim Duncan.

Perhaps the real reason is that they got Greg Poppovich. He tamed the wild three pointer and used it as a weapon. Effectively, it's the old ways of war, the Jazz infantry, having to deal with the force multiplier of cavalry. It's a new ball game.

And our offensive playbook needs to evolve to embrace it. 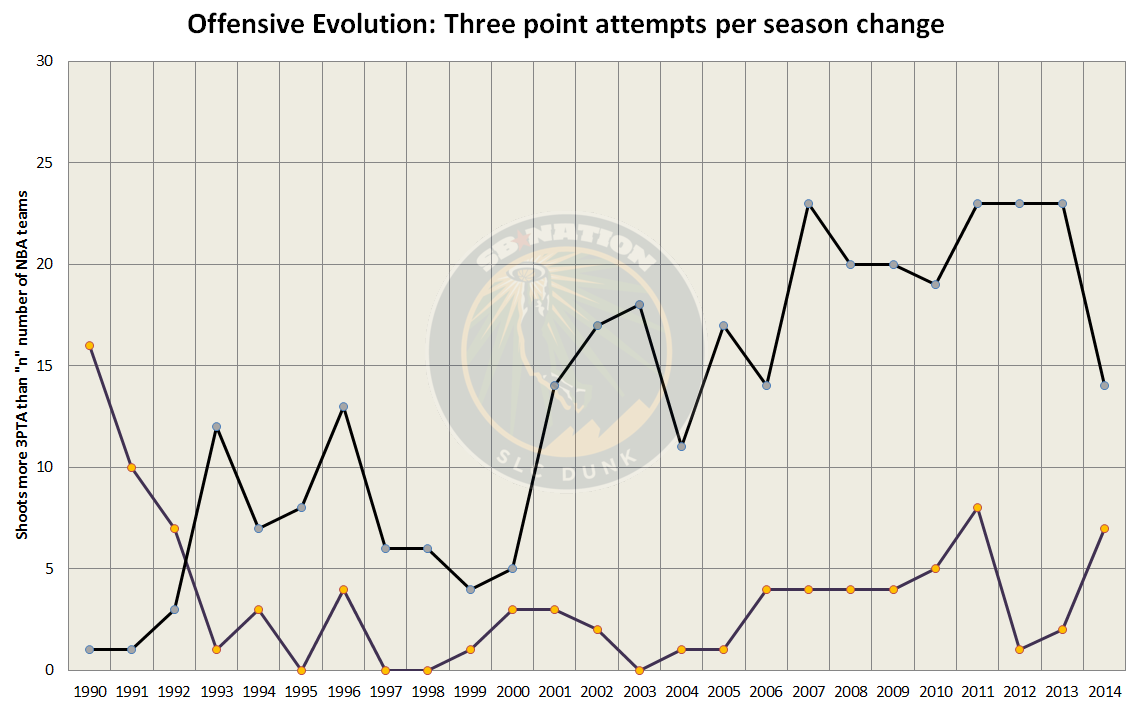 This chart is complicated. The Data was hard to get, and hard to normalize because the size of the NBA changed from 23 teams to 25, to 27, to 29, and then to 30. But this attempts to show how many more threes this team takes compared to the rest of the NBA.

The Utah Jazz are bottom five from 1993 onwards except for a few blips. The Spurs climbed up to be better than 20 other teams in terms of most threes attempted per season. Their floor spacing is excellent. And threes come within the flow of their offense. Our offense used to be the beautiful one.

Let's reclaim beauty and marry it to efficiency. Let's take more threes within the flow of the offense.