NBA Playoffs 2014: Tim Duncan had a big game, but is he really beating Father Time?

Take a look at the most reliable bigmen performers in the NBA playoffs from the last three decades.

Share All sharing options for: NBA Playoffs 2014: Tim Duncan had a big game, but is he really beating Father Time?

An old proverb suggests that 'Time only fears the pyramids,' but if last night's NBA Playoffs action is any indication then perhaps time should also fear the San Antonio Spurs center Tim Duncan. Duncan has now played in an astounding 229 playoff games and will be playing in at least another four as his Spurs will face off against the Miami Heat in the NBA Finals. An entire generation of NBA fans have been raised with an always excellent Duncan performing at an excellent level in the playoffs. Anecdotal evidence, like last night's game, suggest that Duncan is really beating Father Time. But let's investigate this theory and see if the numbers (or in the case for some of the following players, rings around the tree trunk) validate this idea?

Thanks to Basketball-Reference (I site I gladly give money to every year, God knows they've earned it) you can generate a lot of data with a few short clicks. For this investigation I limited the field to player seasons between 1984-1985 and the ongoing 2013-2014 campaign. This may unfairly hurt some players who did make it on this list, but did not have their peak performances during the last three decades. I guess this gripe is limited to just the Big Three who played for the Boston Celtics back in the NBA Playoffs on CBS days. The next filter was to get rid of the players who were not bigmen. Bigs have their own distinct physiology compared to the more lithe wings and point guards who play the game. Also, there's more uniformity in what you expect -- essentially points and rebounds. There could be some level of evolution here ('We like blocks!' 'We like passing bigs!' 'We like bigs who can space the floor!'), but for the most part it's simple, and a somewhat valid situation.

And the big issue here was playoff performance. The following players are ranked by it, and specifically, ranked by the number of 20 point / 10 rebound games they've had in the playoffs. To qualify for this you had to at least have 11 or more such playoff games. I guess you could say that's the critical component. I added it all up, and measured it against the playoff games where the player had a 20/10 (or better) game at the ripe old age of 35 or older.

If you're good, you're on this list. If you're great, you are at the top. If you are beating Father Time, the evidence will support it.

Retired (But did not qualify for playoffs at age 35 or older): Shawn Kemp, Chris Webber, Ralph Sampson, Xavier McDaniel

As the critical component was 20/10 playoff games (the variables being career vs age) the players used make sense. For the young guys I've kept in, they deserve to be listed as players to watch. I decided on them instead of putting in shooting guards who played 15+ seasons. They had remarkable careers, but aren't really apples to apples here. 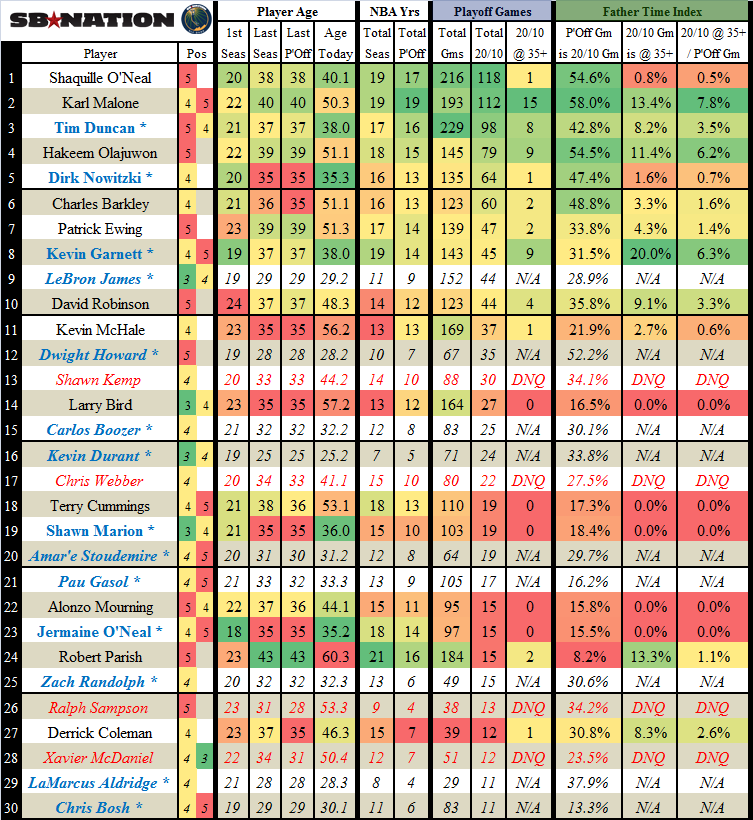 There are 10 guys who have more than 40 playoff games where they subjected the other team to a 20/10 performance: Shaq, Mailman, Tim, Dream, Dirk, Sir Charles, Patrick, KG, LeBron, and Misses Robinson. That's a really awesome group. For the most part they were the biggest threats to go 20/10 on any given playoff night. Shaq had the most, Karl the second, and Tim is two 20/10 games away from breaking 100 for his career. There are only four players who, for their playoff careers, had a greater than 50% chance of going for a 20/10 game: Shaq, Karl, Dream, and Dwight. Duncan is on the wrong side of that barrier, Karl Malone, on the other hand, approaches 60% of all of his playoff games being 20/10 games. If we're looking at ordinal ranks, his #2 in Total playoff 20/10 games (from '84-'14), and #1 in 20/10 Game % mark him as both one of the most consistently reliable and prolific bigs in the modern era.

What about 20/10 games when a player is 35 or older? Only one player has more than ten, and that's The Mailman with 15. The next bests are Hakeem, KG, and then Duncan. Duncan has played the most playoff games of anyone on this list (for the time period selected). He's played nearly 100 more than KG has, yet has fewer 20/10 games at the advanced age group. If anything, you could argue that Father Time is going easy on Duncan because of the beat down KG put on him. Really, 20% of all of KGs 20/10 games in the playoffs are games where he's 35 or above. There are a few reasons for this, the first being that he didn't make the playoffs frequently at all as a younger player, and retained his future Hall of Fame ability in his advanced age. If his team was better he would have had more 20/10 games in the playoffs (total), and as a result, his 20/10 @ 35+ percentage would be lower as well. I guess the inverse is also true, if Duncan didn't play his entire career with a combination of THREE OTHER HALL OF FAMERS (Robinson, Tony Parker, and Manu Ginobili) he may have missed the playoffs more. But as it stands, KG's 20% looks a lot better than Tim's 8.2%.

If we use that comparison, the percentage of ones 20/10 playoff games that are from the 35 and up group over the total sum, then Duncan is up there ... but ... you know ... lesser than Derrick Coleman. KG is tops, the next best, is duh, Karl Malone -- but there's a huge drop from #1 to #2 here. Other players who break 10% are Robert Parish and Hakeem.

The least useful data, in my mind, is the last column. The percentage of all playoff games that were 20/10 games where the player was 35 years old or older is such a bugaboo because sometimes good players play well but don't make the playoffs often. In the case of The Mailman, who has played in the playoffs 19 times in 19 NBA seasons, this data is useful. For a guy like Sir Charles, or Ewing -- guys who missed the playoffs 3 or more times -- it's less rewarding a statistic. But still, here, Karl Malone is tops, and does so with the largest sample size in playoffs or seasons played. Parish played more total seasons, but was in the playoffs 3 times less than Karl.

For me it is going to be interesting to see where the currently active players end up. Dirk may never make another playoff team. Tim could easily break that "100 playoff games with 20/10" barrier this season, which would be cool to see. He may have to do just that if Parker is injured in a serious way. KG may retire, and guys like Dwight, Gasol, Z-Bo have at least 5 seasons left to make their marks on the NBA history books.

In the case of Shawn Kemp, Chris Webber, Ralph Sampson and Xavier McDaniel we can see that Father Time beat them. You could argue that Shaq let Father Time win, but he had proved his worth by then. Karl, Hakeem, KG, and Robert Parish all look to have beaten father Time.

I'm still on the fence about Duncan. By the metrics presented he may not be the best at beating Father Time there ever was, but he's one of the best. Regardless of my investigation here and arbitrary quantitative values, he's still among the best, most successful centers in NBA history. He's had a long and excellent career that has been littered with playoff successes and numerous NBA Finals trips. He's four wins away from a fifth championship. And he's playing very well.

And his performance last night would make Father Time himself smile. I assume. You know, because Greg Oden could not be reached for comment.