The New Orleans / Utah Jazz have a strong history, but have had few stars

The New Orleans / Utah Jazz franchise is 40 years old now. They've been around for four decades and have highs and lows. Obviously the lowest had to be being so financially insecure and such a poor draw, that they had to move miles and miles away from their original home. The highs, clearly, have to be going to five Western Conference Finals in seven years, topped off with two very exciting NBA Finals appearances. Some teams have been great, some have been fun to cheer for, and others have been head scratchers. But one thing has remained over the last four decades -- the Jazz, while fun and funky at times, need a star to really shine. Over the four decades of this club the team has had a All-Star guard only four times. The once a decade average isn't that hot compared to other clubs, but still, we Jazz fans stand by our Jazzmen Pete Maravich, Rickey Green, John Stockton, and Deron Williams.

Pistol Pete was the ultimate showman. Green bounced around for a bit, but found a home in Utah, where he became a two way threat. Stock, well, this Hall of Famer is arguably the best pure point guard in the history of the game. Deron Williams, at his peak and used under the direction of Jerry Sloan, was a game changer who could take over games when at his best. Beyond those four there haven't been many star guards for the Jazz. Yes, we love Kyle Korver's shooting, and Jeff Hornacek's all-around game. Darrell Griffith was amazing to watch. Jeff Malone could fill it up. But these guys weren't really stars in a Jazz jersey. Great players, all of them. But not stars.

Today the Jazz have two young guards who they hope can become stars; Trey Burke and Dante Exum. Let's take a look at what they bring to the table and compare them against these historically stellar ball handlers of Jazz yore. I'd love it for these two guys to be stars in this league, and the first step for that seems to be at least making one All-Star team. That's the definition I am using here because Green made at least one while in a Jazz jersey. (Guys like Jeff Hornacek or Kyle Korver or other cats did not.)

And to make it as an all-star as a ball handler, more than anything else, you need to be unforgettable on offense. In this day and age you don't need to play defense to make the All-Star team, but back in the day guys like Green and Stock used to lock guys up. We hope our two young guys will be at least average on defense. Though, if you look at who gets in, it's all about offense. Thankfully, I have an offensive metric that judges players based upon how much pressure they put on the defense. It's the Gestalt Offensive Rating, or GO Rating for short. I've talked about it before, and if you want more info on it, ask me in the comments section below. Basically all you need to know is that you have a good enough offense to be a starter if you are at the 50.0 level. You are good enough to be called a star offense player at 100.0. And anything above that means you are demonstratively better than not just the average NBA player, but your peers who are stars as well. Of course when you're looking to compare guys from the 70s (no three point line, no recorded turn overs, etc) it's hard. So when you do check these GO rating comparisons keep in mind that Pistol isn't getting any points for any of his assists because we have no turn over data. He was a one may show so these numbers are significantly lower than what actual pressure he put on opposing defenses.

So I looked at the first five years of these guys' careers, and put in Trey Burke and Dante Exum too. And . . . yeah . . . there are big shoes to fill. 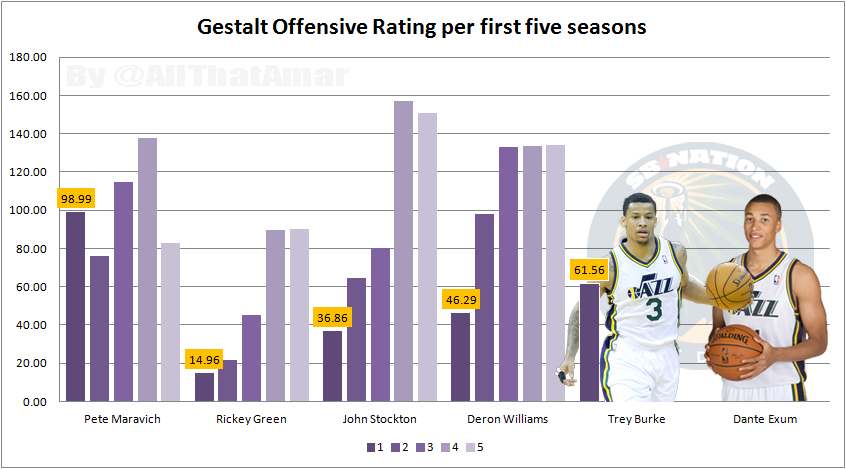 Pete came out of the womb being amazing. But most of these early numbers are form his days with the Atlanta Hawks. Green had an steeper climb to being a solid NBA starter, and these numbers do not include his All-Star season. Stockton was starter ready on offense by his second season, and once he got a chance to play he was ridiculously good. Deron was a beast but levelled off -- but he leveled off at a really great level though.

So what does that leave us with? Well, Trey had the best Rookie GO Rating for a Jazz ball handler since Pistol Pete. That says a few things right there. I hope to see him get to at least 75.0 this year, if not higher. Exum is going to have flashes of brilliance and flashes of inexperience during the upcoming season. If he can be as good as Deron Williams was then I don't think any of us are going to worry. If these two guys continue to progress, and learn to cooperate on the floor, we could have two guys getting triple digit GO Ratings in the same back court.

Which will leave the NBA starry eyed for the Jazz for once.

And I think they have the ability to do it on the court. And their off-the-court credentials are apparent. Burke was the National Player of the Year in college, won the Bob Cousy award, and has been in GQ and other publications. He has fans all over America and the world partly because he was a University of Michigan guy. Heck, the man who did his surgery last year on his finger was also a University of Michigan guy -- but had settled in Utah.  Dante has a larger audience because there's so much buzz around him created by his agents. He's been in national ads for huge companies and signed on with sports drink companies that other NBA stars have. And he's a rookie.

These two players are only going to get better and better on the court, and these stars will only continue to shine brighter off of it.