NBA Free Agency 2014: Trevor Booker adds experience, but how much?

The Utah Jazz signed UFA Trevor Booker from the Wizards. He is being touted as being an experienced vet. Let's put that to the test!

Share All sharing options for: NBA Free Agency 2014: Trevor Booker adds experience, but how much?

Yesterday we learned that the Utah Jazz and Trevor Booker were going to consummate the rumors we heard weeks ago. The deal has yet to be signed, but it will be for two years, and a grand total of about $10 million dollars. That's good money if you can get it. We also broke down the Cap situation for the Jazz here. But we're not quite Bookered out yet.

Well, at least I am not.

I'm not crazy about this deal, but I'm not against the idea of what we could stand to gain. Booker is a solid rotation guy who, curiously, is both a not-an-every-day-player who also has a ton of starts under his belt. This is, honestly, because of crazy injuries to the Washington Wizards front court in the last few seasons. That helps explain how it is possible for him to have played 20.3 mpg over his career, despite playing in only about 75% of the games his team has played in. He's not playing a normal amount every game, and the data is skewed. Oh well.

He's still a guy who:

These are all things our current roster needs. We are too young, don't have a lot of guys who have played regular minutes, and very few, if any at all, have even seen the playoffs before. So without even breaking down his numbers it's easy to see that he brings some things to the table that our team sorely needs.

That said, let's try not to go crazy and suggest that he's some amazing, former All-Star who is some throwback power forward who knows what it takes to win. He's not P.J. Brown or Charles Oakley or anything like that. He's a 6'7 guy who plays power forward and used to shoot three pointers back in college, regularly. (In his senior season he used to take more than one three a game for Clemson) I know it is the job of some people to exaggerate information to paint everything in the most "this is perfect for us, and you should be grateful!" type of way.

Well, this isn't my job. And as it's my hobby, I gain nothing from it, except the intrinsic motivation to give accurate information to the fanbase I feel like I owe a debt to.

Booker was drafted in the 1st round, pick #23 of the 2010 draft. That is the same draft that includes Derrick Favors (1st round, #3), Gordon Hayward (1st round, #9), and Jeremy Evans (2nd round, #55). And it is also the same draft spot as Rodney Hood. He has played in at least 48 games every season he has been in the league, and had played at least 800 minutes every season. Developmentally, if we're doing the whole 2,000 minutes a season thing, he's in step with that concept. He's about halfway behind. BUT he has been a part of four training camps, a few summer league games, and two playoff serieses. (Shums, what is the plural for series?)

He's also a product of a strong Clemson program that has brought a number of great power forwards into the league: Larry Nance, Horace Grant, Dale Davis, Elden Campbell, Tree Rollins, and others. Booker is experienced, he played four years in college and was a first round pick. Then again, that's the same level of experience that Morris Almond had -- but one of those guys stayed in the league, the other did not.

So he has experience. That's something our club needs. But let's actually go beyond the ideas of the Jazz being without experience, and the concept that Booker is a grizzled vet. Let's look at the numbers. 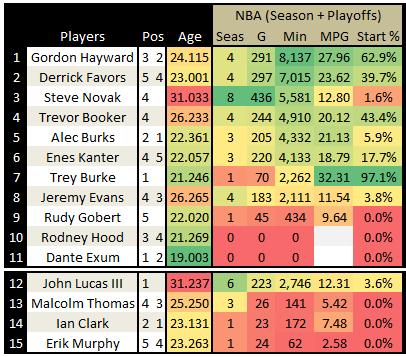 If we're just looking at NBA regular season and playoff experience Trevor becomes one of the top 5 most experienced guys on the team. But, well, He's played 4.9k minutes in four years. Alec Burks and Enes Kanter are at 4.3k and 4.1k in one fewer season. It's not like he was a) an every day player, or b) getting those minutes for any other reason than injuries. This could just be the same fallacy about John Lucas III being such a great vet. Sure, you have years and you're older -- but it's not like you really played much. Lucas has played 2.7k minutes in the NBA over six seasons. He is 31 years old. Trey Burke played 2.3k minutes in his rookie season alone. He is 21 years old.

I hope that one day we go beyond age as some magical determiner of ability. I'm 35. I'm not better at blogging than someone 25 years old who went to journalism school and has been writing at a higher level than I can. But hey, I guess I'm "more vet" because my parents had sex before his or her parents did (the fictitious 25 yr old blogger).

Moving away from parents having sex, and getting back to Treve Bookvak, he gives the Jazz experience for sure. But it's not like he is someone who, himself, is fully experienced. He's behind the curve on his own personal development as a player. And while he has more minutes than a guy like Rodney Hood does -- it's not likely to remain that way after a decade from now. Or so we would hope.

But let's scroll back on that mouse wheel to zoom out and try to better understand how a player gets here. Let's look at their entire post-high school career. Here we find more evidence to suggest that Booker is a real vet. Right? So let's add their NCAA experience, their NBA DL experience, Summer league experience, NBA preseason experience, International experience, and national team experiences to the pie.

What do we get?

[N.B. Minute and game values for John Lucas from his time in Italy, and China and other places is not noted here, but we're assuming he did play. And an assumption of this value comes in the next section]

If you go 1 min in the NBA = 1 min everywhere else then Booker really does show that he has experience. But a huge part of that is his nearly 4k minutes at Clemson. I don't think anyone here thinks that 1 min in the summer league is the same as 1 min in the NCAA = 1 min in the NBA. So we have to grade these.

Please argue with me here, but for the sake of making this simple, I feel like:

We can fiddle around with these values, but this way we don't overvalue playing a lot at a lower level. But with the fiddling I did I get this: 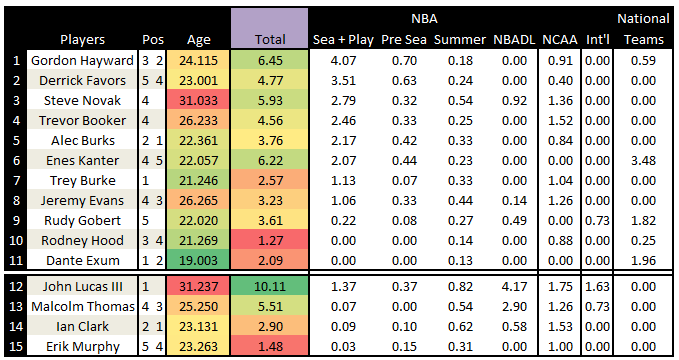 [N.B. I am assuming that in his years outside of the NBA that Lucas played at least 2,500 minutes in three seasons. This may be an overestimation itself.]

So, here we see that Booker's experience is still big, but actually not THAT big when compared to the other guys who are on the team. His graded 4.56k minutes over his playing career outside of high school is actually less than that of Malcolm Thomas. And that guy has banged around a lot over the years, but does his 1,291 minutes in the NBA-DL and three years in the NCAAs, and two years in International leagues make up for playing in only 26 NBA games? Probably not. Is this a true way to look at it? I don't know. I think the reason why this fails the eye-ball test is because we don't think of Enes Kanter as anything BUT someone who is raw. But he actually has played a lot for his National Team growing up, and I guess we just forget that -- and really -- he has played (ungraded) 1,161 minutes for Turkey over the years.

Of course, none of Dante Exum's high school minutes are here, and he shows more green than he actually is. And, I'm assuming the opposite for Lucas, giving him 2,500 minutes he may or may not actually have.

I'm not convinced that my idea of trying to sum all of their experiences is the best way to look at it, but I don't think just looking at the NBA experience tells the whole picture. I'm obviously wrong with how I graded out how much each level of experience is wroth -- but any way you slice it you have to admit that Trevor Booker does give the Jazz a bit more experience, but it would be silly to actually think of him as anyone more experienced than our own C4 members.

At the end of the day I'm not mad about this. Sure, it re-creates our favorite thing in the world, a front court log jam, but on his own merits Booker is a player I think we'll enjoy. Sure, he's short, and husky, and his wingspan isn't any good. But he works hard, he's been around the block. He was a 1st rounder. And ye Gods have you seen him play defense?

He's going to be a solid rotation guy in the league for many years. But just don't think that he is actually a guy bringing in experience. With the number of minutes he has actually played the Jazz mass-media would call him green. Just against our mismanaged development he looks normal. But that's a spin for someone else to sell. Not me, my friends.