What time is it? It's G-Time

I was thinking of starting this post off with the title "Gordon Hayward likes pie" but that's not the site I want to run. The site I do want to run is hopefully an educational place where Utah Jazz fans from all over the world can get news, information, and analysis. But I do want to do it in increasingly unique ways (hence, the diversity of content types we have here). So what does this have to do with Gordon Hayward and pie? Well, I was looking at how experienced he is. And really, he is. He's a vet. He's going into his fifth season, and the guy working out right now with the team that's going to win the World Cup has plenty of reasons to feel like this is his team.

One of them, obviously, is that out of everyone else on the roster -- no one has played as many minutes as he has in a Jazz uniform.

Gordon has played in 291 of 316 games over the last four years (including the lockout and the first round of the playoffs that one year). That's 92.09% of all the Jazz games. That's not at that John Stockton / Karl Malone level. But it's pretty high. If you add it all up it's 8,260 total minutes, which is a lot. It's more than the 2,000 minutes per season that I am somewhat interested in giving younger guys.

With all the games, and all the overtimes, the Jazz have played 76,665 minutes over the last four seasons. G-Time is at 8k. What does it translate to? 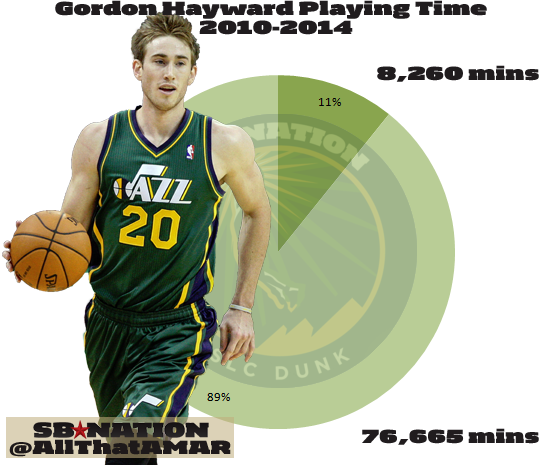 It's 11% of all the minutes possible. The average for a 12 man roster is 8.3% of the minutes if everyone got it equally. We see Gordo has more. If you look at just the last season it's a huger piece of the pie. 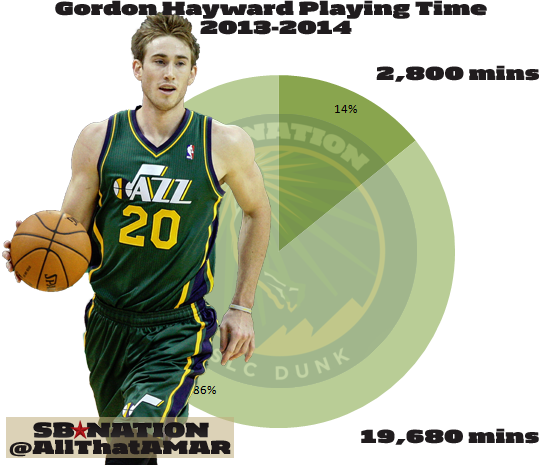 Yeah, 14% is +70% more than the normative average. It's a bigger piece of the pie, but this is if we look at what Gordon has gotten vs. the entire team over the last four seasons. As Hayward is only one man, let's judge him against the other single possibilities.

Gordon has played in 8,260 total minutes, and in 291 games. Simple maths tells us that's 28.38 mpg. A single player can play 48 minutes per game (in a non-overtime game). If you look at his average against a single position you see that Hayward gets to play more than half the minutes. 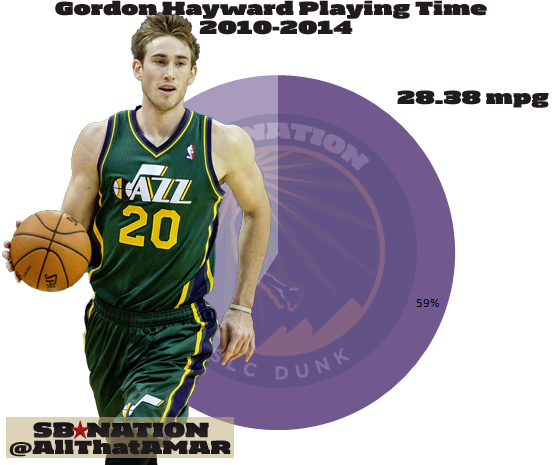 Yeah, nearly 60% of the time is G-Time. But what about last season? 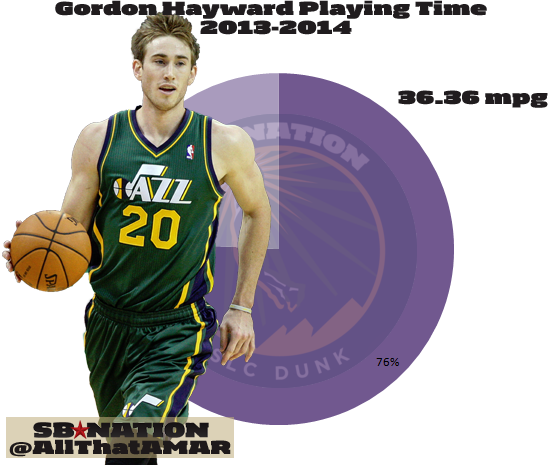 I think this is Hayward's team to primarily lead. He's the guy who rose up against not being a Rookie game guy to being a USA Select member, and a USA World Cup training camp member who made it past the first cuts. He has the national cred from the smartest basketball minds on the planet. While Trey Burke is a born leader who is just as good, if not crazier, as a leader -- and while Dante Exum seems to ooze star potential; it's clear that Hayward has earned the right to lead this team.

After all, he's been the only regular player over the last four seasons, and in his most recent campaign totally dominated.

Gordon is, effectively, finally becoming "the Precious" that we hoped he would be years and years ago when he was just known as the unprotected New York Knicks draft pick. And this upcoming season is going to be pretty awesome as a result.