Share All sharing options for: NBA Schedule not doing Utah Jazz any favors

Last season, back in our salad days of 2012-13 I felt as though the NBA had given the Utah Jazz "one of the best schedules" (Me, back on July 30th, 2012) in recent Jazz history. We are paying the piper this season with one of the rougher ones in recent history. The toughness really starts tonight, as the Utah Jazz embark on a four games in five nights road trip. Yes, I have a rudimentary schedule post out here -- but I have yet to do the big schedule post still. (I know, I'm slacking; I'll be done when it's done)

Yes, it begins. Only once in recent history have the Jazz performed well on their first Eastern roadie of the season (back when the Jazz beat up on the Miami Heat, Orlando Magic, Atlanta Hawks, and Charlotte Bobcats. That was back when our head coach was Jerry Sloan, our best player was Deron Williams, and the rotations were not set in stone, so that if your starter was sucking, you'd be benched in the second half for Kyrylo Fesenko. Right now Jerry Sloan is back with the Jazz, Deron Williams is now on the other team, and Kyrylo Fesenko is helping his pal O.J. find the real killers.

These wins are not going to come easy. We can look at history as any indication, but history is not the present:

Now, I'm not saying the Jazz point guards in Jamaal Tinsley and John Lucas III are bad. I'm just saying that Trey Burke should be better than them, and without him the disparity appears much larger than normal. Even without Rondo playing, we are in trouble. And if you compound our usual Eastern road trip flubs with a young club that doesn't know how to win yet (at home or on the road), then you have some serious questionmarks for these four games. Four games in five nights, two sets of back to backs. Boston isn't a good team, and we theorize that Toronto isn't either, but both of those games are the second of back to backs.

The Sidney Lowe substitution package (more on this later) is wearing our guys down and each time down the stretch our team ran out of legs and couldn't finish strong. Injuries are a part of that, and each of the teams we're playing are healthier than we are, and all at home. 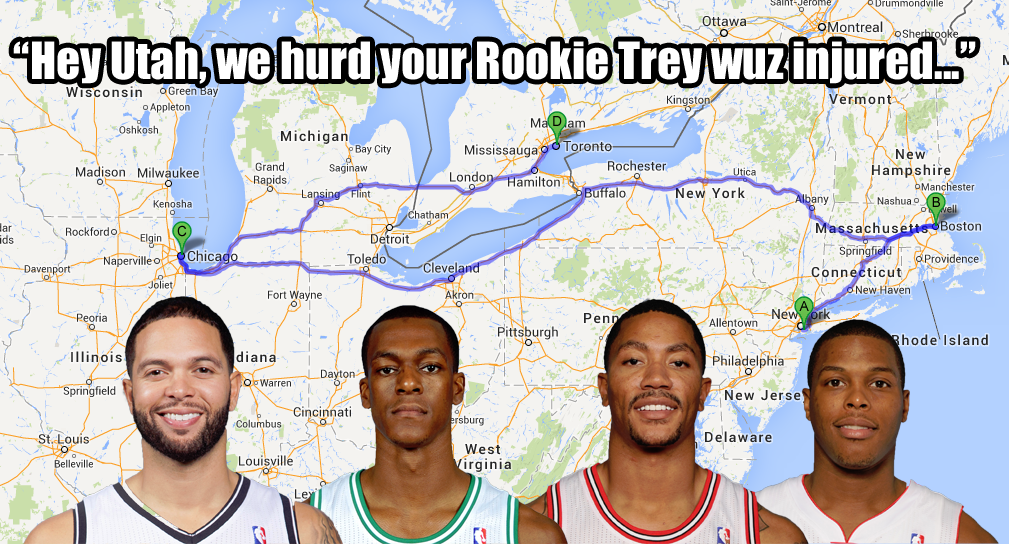