It is now December, which means a few things. The first is that it's time for me to start worrying about Christmas Presents as I have 29 nieces and nephews. (Kanye voice: And again, I'mma let ya finish, LDS birth rate is nice, but Hindu population explosion is one of the largest of all-time!) The second thing to worry about is that we've seen a whole bunch of Utah Jazz games and we have only five more months of the season. In this particular case we've played 18 of 82 total games. That's only 22% of the season but we've seen some things, man (NSFW outgoing link).

In the first 18 games the Jazz have but 3 wins. We've seen some close games and fourth quarter collapses. We've seen the Jazz get punched in the face early and stay down and soil themselves. And we've seen some gritty victories. It's all experience, as you can learn from wins and you can learn from losses alike. I'd love it if the team was learning. I don't actually know if they are. (I also don't know if they aren't!)

So what DO I know? I know that the month of December is going to be a pretty great month if you love watching the team play. The team plays 16 times this month, and four times every week for the first three weeks. There are more road games than home games, but road trips are supposed to help your team bond. Home stands are supposed to help your team get in practice sessions. We need both, but having watched the team play it really looks like they need to know each other a little bit better as on the court they look like they've never seen one another at times. 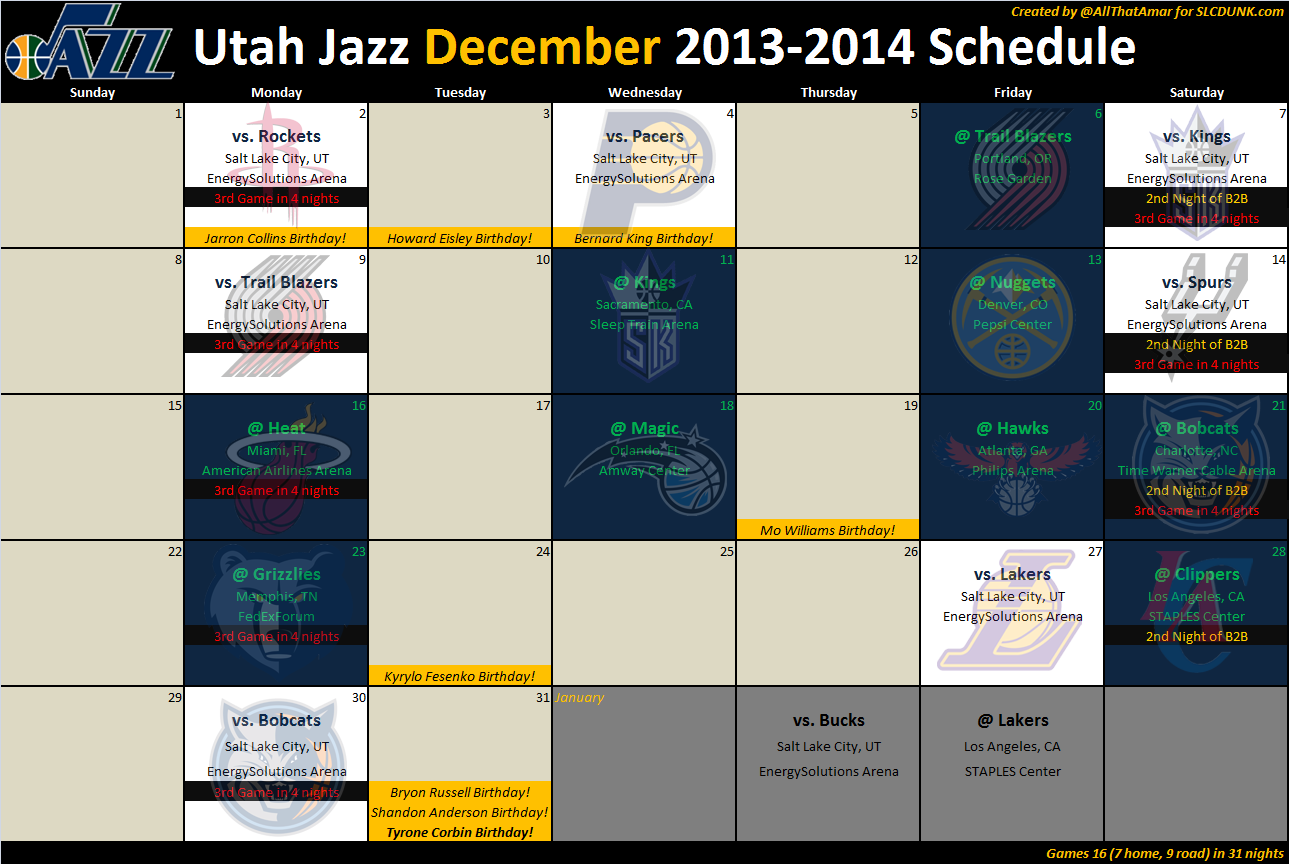 Okay, the Jazz play three good teams this week, and one team we've had recent trouble against. The Kings game will be the second game in a back to back set, and also the third game in four nights. So, it will be harder than it should be. Clearly the team has a chance to go 0-4 this week. I'll hope for the best and predict a 1-3 week just because I don't like the Kings. (Which has NOTHING to do with their owner Vivek R rejecting the suit attempt by my family to arrange the marriage of his daughter with my cousin!)

This week is another four games -- but we only play against the surging Blazers and WCF champs here, plus two teams on the road that we've had trouble against. Of course, the Spurs game is the second game in a back to back set, and also the third game in four nights. So, I'm going with a 0-4 week.

Remember in the good old days of Deron Williams, Paul Millsap, Andrei Kirilenko and company when we went 4-0 on this road trip? I do. But these times aren't those times. We'll bee seeing Millsap though (and some other former Jazz players like Kyle Korver and DeMarre Carroll) when we play the Hawks. The Heat should hurt us, but thankfully we don't play the Magic the next night. When the Jazz swept this road trip years ago it was two sets of back to back games, where both of the last two games were also the 3rd game in four nights. Of course, we see big Al Jefferson down in Charlotte, which will also be the second game in a back to back set, and also the third game in four nights. I predict we will go 1-3.

ONLY three games this week. It is a Christmas Miracle! Three hopeful Western Conference playoff teams though, two on the road, and one of them is the second game of a back to back. I'm looking at a 0-3 week.

Ah, the Bobcats again! We win this game. We have to. Tyrone Corbin's job may be at stake.

Month Predictions: I have the Jazz going 3-13 this month; but hey, I like to be wrong.