NBA Draft Lottery Speculation: If you care about the Utah Jazz or Limbo, how low can they go?

Share All sharing options for: NBA Draft Lottery Speculation: If you care about the Utah Jazz or Limbo, how low can they go?

Because I know I'll see this question in my inbox in a few hours . . . I did it for you guys and gals who might ask. (For the record, I'm pretty sure we're looking at a #14 pick in the draft, so don't expect an impact player) Disregarding injuries and a change of motivations -- it would appear that the Utah Jazz are in the same neighborhood as the Portland Trail Blazers and Dallas Mavericks teams looking at the playoffs from the outside --> in. (Right now 1 game separates the three teams) That may or may not be the case after the next 12 games have been played. Here is my simple, quick, and not very scientific prediction of what these team's records will look like. 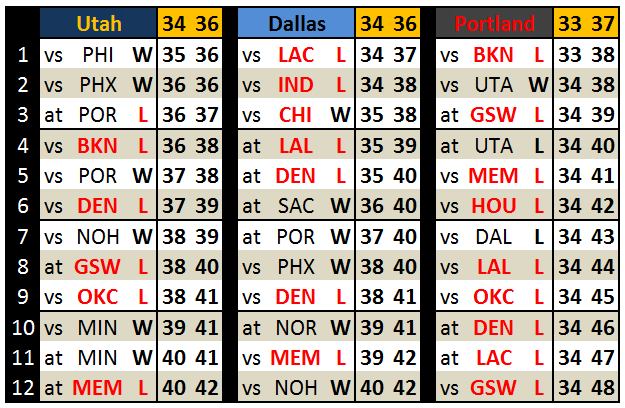 By my estimation we'll remain tied with Dallas, but we own the tie breaker. The Blazers will unshamelessly tank as per their winning culture. Of course, if we lose tomorrow against Philly, or if Dallas goofs up, the outcomes could change significantly.