So let's go into it a little more

I always felt like March would be the barometer of our team. November and December were mostly road games. January and February were more home oriented and our ship should be pointed in the right direction by the All-Star Break. For the most part that's pretty much what happened. Then the Jazz started off sluggishly after the All-Star Break and even worse after the Trade Deadline. The team suffered through an 0-4 Eastern Conference road trip which I wrote more about here.Utah bounced back with two wins against the Pistons and Grizzlies, which sandwiched a tough game against the Thunder on the road.

Then the wheels kinda fell off as the team lost to the Knicks who were severely injured, then the Rockets, and then the Spurs, and then the Mavericks -- getting blanked on the Texas Triangle trip. At this stage the Jazz were 3-9 and and wobbling.

Our Jazz sucked it up to win our last 4 games, and went 4 for 5 on our March ending 5 games in 7 nights brutal stretch.

So if I had to look at our team as a product of March I'd say that we took our licks early, but stood tough, and are now surging back for more. It is admirable, and heart warming. Our players are playing team ball. Our younger guys (for the most part) were getting bigger roles. Guys broke out of slumps. Our coach was improving. March was going to make or break us.

And when we went 3-9 it really looked like we were broken. This team ran off 4 straight wins and is still #8 in the Western Conference with 8 games to play.

This is really the final countdown for our season. We're close to the finish line. The team owns the tie breakers against the Lakers and Mavericks. The team seems to have the easiest schedule. And we've got the inside track to return to the playoffs. That said, we still need to play the games -- and play to win. 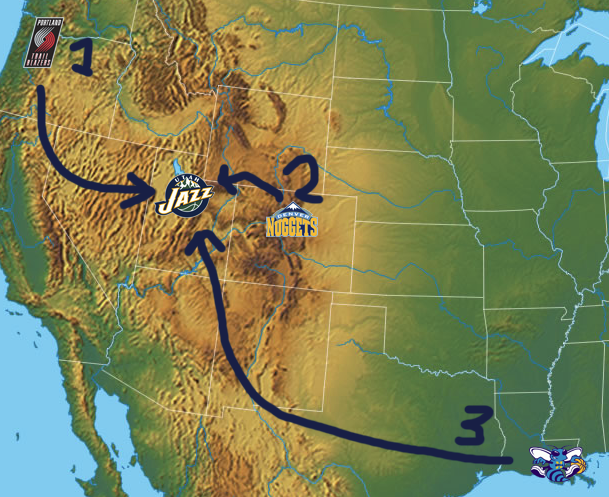 Okay, Portland may be tanking right now, and who knows if LaMarcus Aldridge will play. Damian Lillard is a little banged up too. The Jazz absolutely need to win tonight. Well, every game is a "must win" game at this point of the season. Denver is going to be going all out, but they'll be playing in the ESA. They're #3 in the West, but we're a damn good home team. New Orleans? The Pelicans? Last year we lost to them late in the season during our #PlayoffPush. I hope we don't take them lightly on Friday. (Of course, the Jazz suck on Fridays) I want the Jazz to go 3-0 here. So that's what I'm going with. We have momentum, and have to win our home games. 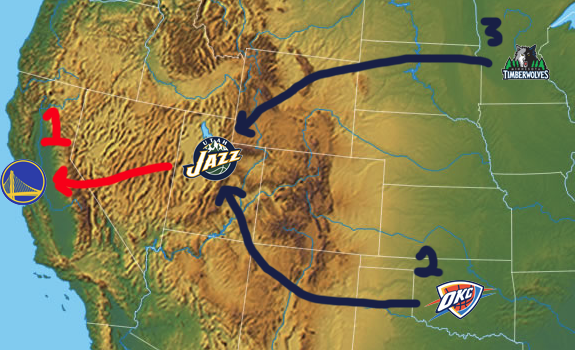 This week is going to be a little rough to start the week. GSW and OKC are both tough, and I wouldn't feel bad if we lose either game. We have the capability to WIN any night we step on the floor, but I don't like our chances against Golden State (we don't know how to defend guards). OKC wants #1 in the West, and wants to hold off whomever is #3. I think they're still playing games hard at this point in the season. Minnesota? We should cream them. I'd say the Jazz go 1-2 this week. 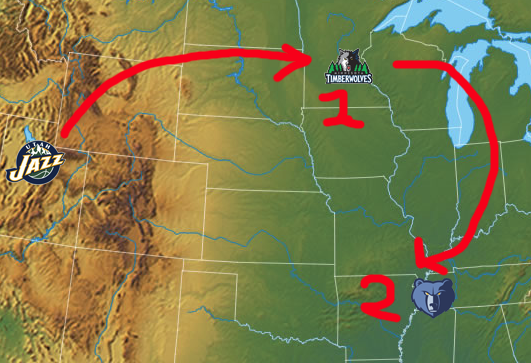 Last two games? Both games on the road? Most likely playoffs still in doubt? Jazz are 4-2 so far with two more games to go? Let's say the Jazz split this, and go 1-1. (If we lose to Minny, we'll win against Memphis; and vice versa)

Which is 2 games off of my preseason prediction. And with all the craziness this year (injuries, slumps, schedule, and occasionally poor coaching), that's not that bad.

Andy already set up the poll in the Downbeat for how many games will we get this month. I'll change the poll for our final record.

Last thing? Do we make the playoffs?