Can the Utah Jazz sweep the Minnesota Timberwolves? When did we last do that?

Share All sharing options for: Can the Utah Jazz sweep the Minnesota Timberwolves? When did we last do that?

Tonight the Utah Jazz must win against the Minnesota Timberwolves. Yes, a game on the road against the T-Wolves is now a must win game. Well. Just in the scope of this season. In the big picture if you climbed the Mount Olympus of Jazz basketball and told the Zeus there (probably Frank Layden, who was COY and Exec of the year in the same season and mentored Jerry Sloan) that a game against the T-Wolves was a must win he would have a hearty belly laugh. And then, I dunno, ask you which is better, a dunk or a blooper. And then let you leave.

But within the scope of this season, there really is no post season without a win tonight. But the imaginary Frank Layden deity I've conjured up hints at the point he didn't say, like all trickster gods. It's not just about this season, beating the Wolves tonight attempts to do something that would be worthy of a small plaque in an anti-chamber of the Jazz basketball Mount Olympus -- actually sweeping Minnesota.

That's a feat that needs to be accomplished if we are really going to win tonight. A win tonight keeps us in the race for the playoffs this season . . . but sweeping the Wolves is really something that doesn't happen much in our history. First round exits? We have a lot of those.

The Jazz have not swept the Wolves since 1998-1999, lockout year, and that was 15 years ago. How crazy is that -- it takes the near impossible to get us in the playoffs now. Within the small picture we gotta win tonight, within the slightly larger picture of this season we gotta sweep a team, but within the continuum of Jazz basketball -- we have to do something we've only done twice before.

Of course there is where Head Coach Tyrone Corbin comes in and says "it's only one game." No one else knows the Wolves as well as he does, having been an expansion draft pick of their team. His champions this season have been Al Jefferson and Randy Foye -- two former Wolves players. And Corbin's right hand man, Sidney Lowe, is a former Wolves player, broadcast member, and former head coach all of Minnesota.

If there ever was a team built to sweep the Timberwolves on this karmic level, it is this Jazz team.

"I got this." Corbin says as he licks his lips, and the rushes forward to lead us to victory!

ps. Special thanks to this tweet for getting me to look into this. 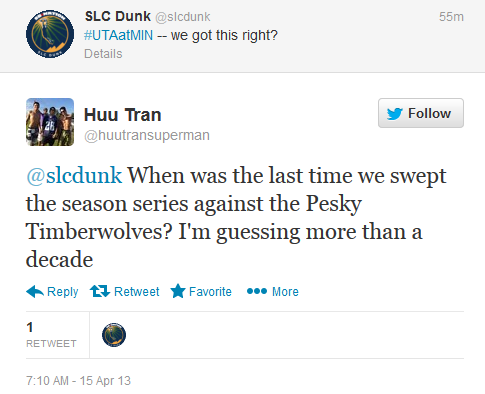