Utah Jazz embark on most difficult part of January schedule, face Spurs, Pistons, and Timberwolves. What?

Three games. Four nights. All on the road. Against teams with a combined 64-49 record.

Share All sharing options for: Utah Jazz embark on most difficult part of January schedule, face Spurs, Pistons, and Timberwolves. What?

Can you believe it, we've reached the "Hard part" of our January schedule. Sure, the schedule makers didn't make this season easy for the Utah Jazz in November and December; and our ending stretch doesn't facilitate any actual direction to 'go for it' or to 'tank'. But our January is super easy with a startlingly low 12 games in 31 nights -- with only four total road games and one back to back set.

This week is the hard part with a three game road trip against the San Antonio Spurs, Detroit Pistons, and Minnesota Timberwolves -- all three games in four nights. Really, only one of our games is the 3rd game in four nights. Back in November seven games qualified as such, and that month had the Jazz going on two road trips LONGER than this one in terms of total nights on the road. 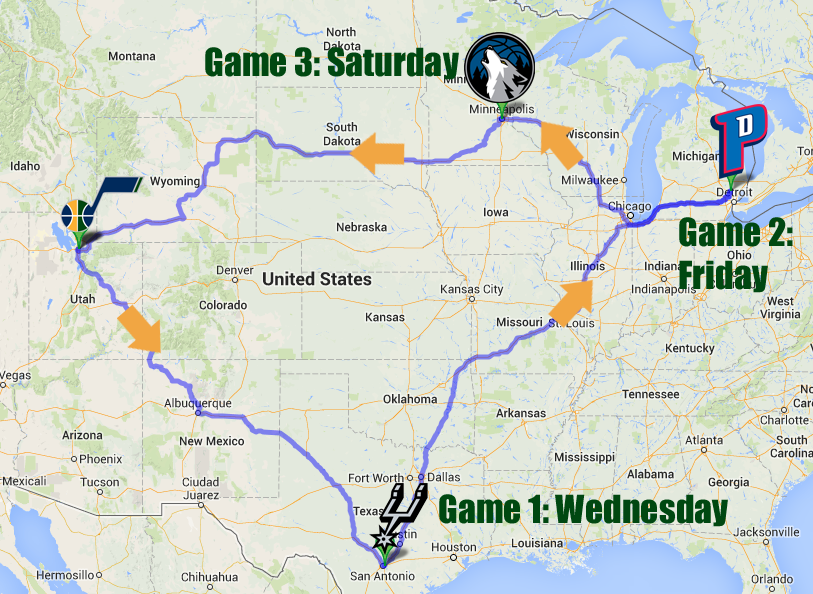 N.B. Those are the driving directions from arena to arena, I'm sure the team plane will chart a different course

Okay, so the main problem is the Spurs, the best team in the West. (We have a way of playing teams when they are on top, like when we played the Portland Trail Blazers they were #1, and when we played the Oklahoma City Thunder a while back they were #1 as well -- there seems to be some daily movement up top now.) The Pistons are fighting for a playoff spot in the East and have a losing record while sitting in the #7 spot (a mere four games out of the #3 spot). The Timberwolves, well, they are #10 in the west and have only 5 more wins than us. If we had Trey Burke all season long we could be in their spot right now. So technically it's only one really tough game. The other two, while on the road, and a back to back, shouldn't be impossible to play in.

Let's break this down further.

There isn't much new to say about these guys.

The San Antonio Spurs: The FIRST team to 30 WINS! pic.twitter.com/74TtraVa4K

But let's try to find some finer points anyway. The Spurs have an amazing offense (6th best in PPG, 3rd best in Off RTG), an amazing defense (4th best in Opp. PPG, 5th best in Def RTG), play at a fast pace (11th fastest), have the best coach in basketball (in Gregg Popovich), and is led by three future Hall of Famers in Tim Duncan, Tony Parker, and Manu Ginobili. As a team they are also #1 in 3pt% (39.8%), #8 in ft%, #2 in assists, rarely foul, rarely sent the other team to the line, and are monsters on the defensive glass. They are missing Danny Green and Tiago Splitter -- two major players in their NBA Finals run last year -- and still chugging along.

And in this game they're playing at home (15-5), and we suck on the road (5-15). All time the Jazz are 20-64 in San Antonio. So the "hardest" game of the hardest part of the January schedule is a game we're supposed to lose? So what are we worried about -- the Jazz are not going to be using Gordon Hayward tonight either. Essentially this is just a test to see how the Trey Burke / Alec Burks Burkescourt can do against one of the best defenses in the league.

It's really a win-win situation for the Jazz. If we lose, well, we lose. We're supposed to lose this game, so really we haven't lost anything if we lose. We're really breaking even if we lose tonight. If we win, well, that's special. It's a victory over the best team in the Western Conference. Plus, it's against the Spurs. So that counts as like 1.5 victories in Jazzland.

DETROIT IS AMPED for this game. It's not just the Auto show that is in town, but the return of Michigan's Trey Burke. The Radio (yes, I still listen to Detroit sports talk radio where I am) has been giving out tickets to callers and stuff. Everyone is excited for Trey, they are happy for Trey, and of course, they are wondering aloud if they should have just done the right thing and drafted Trey. They love him in Detroit. He will get a warm welcome.

The Pistons are 3-7 in their last 10 and playing under .500 at home. This could be a win for us, despite their better team 'on paper'. None of their guys are injured, and they DO have a lot of talent in Brandon Jennings, Rodney Stuckey, Chauncey Billups, Josh Smith, Greg Monroe, and Andre Drummond. Add in rookie shooter Kentavious Caldwell-Pope and the potential to be good is there. In the past we've had trouble with guys like Will Bynum on the Pistons. For the first time in a long time they look like a talented team. They're just not playing up to their 'on paper' quality this season.

Maurice Cheeks is doing an okay job with them, but their defense is almost as poor as ours is. (Ranks of #25 and #21 respectively). They have a middle of the road offense, no doubt predicated by so many ball stoppers on the team at one time. Brandon Jennings is shooting 37.7 fg% this year and Josh Smith is shooting 40.7 fg%. Guess which two guys play the most minutes and take the most shots? Yeah, those two guys. Hilarious.

This should be a Jazz victory, you know, unless some other players on our team end up getting held out of games for injuries. Or if Andre Drummond goes into beast mode.

Wasn't this team supposed to make the playoffs? Well, I guess they could if they leapfrog the Denver Nuggets and Phoenix Suns (which is likely when you look at their rosters and injuries). This game will be the second game of a back to back for the Jazz, and the third game in four nights. The Jazz suck on the road, and the Timberwolves are a mighty 11-7 at home. So that's all in their favor. Minnesota is all offense, they are #2 in PPG, #5 on Off RTG, and are #2 in pace. If we are tired, injured, road weary, or all three, they could run us out of the building. Surprisingly their defensive rating is #9 too, but they still hemorrhage 102.4 ppg.

Rick Adelman may be getting fed up with Kevin Love's antics with the media, and his team mates may be disenchanted by him at times -- but Kevin is still having a 25.5 ppg, 13.1 rpg, 3.9 apg season. He's a talented stretch big who is paired up with Nikola Pekovic in one of the most interesting front courts in the Western Conference. They re-loaded with Kevin Martin (who is a Jazz killer from his Sacramento Kings days), already had J.J. Barea (also a Jazz killer), and there's also their heart throb connection of Ricky Rubio and Alexey Shved. Wait, to the T-Wolves have more white guys than us? Or every other team combined?

They recently also got Ronny Turiaf, so it's not like they're without size inside. They also have our #21 pick Gorgui Dieng (and Tyrone Corbin 's fav Shabazz Muhammad). If this game was in Utah we'd win it. This is a game on the road that has a number of reasons why our team may put out a less than 100% effort. We still should win this game with how well we have been playing of late, but I say we get a Tank Oddity. (Like a random drunk guy from the stands starts at 2 guard at halftime)

Prediction: The Jazz go 1-2 on this trip.