The Utah Jazz are 10-24 after their first Barkley of games this season. The first game of the 2014 calendar year is game #35 for our team, and should be a sufficiently good test of tanking ability. In fact, you could argue that the month of January 2014 is one of the best months in scheduled recent history. Utah will play only TWO sets of back-to-back games this month. And only one game will be the third game in four nights. This is a hard month for an LA team, but let's go back to November where the Jazz had six back-to-back sets and seven games qualified as being the third game in four nights. This month as scheduled is a piece of relative cake for us. I am sufficiently impressed -- not just with this month's slew of games, but moreso with the performance of the team over the last little while.

I was dead wrong back on December 2nd when I predicted that the Jazz would go 3-13 last month. They instead went 7-9, which is vastly better. I'm okay with being wrong though, as a fan you always like to see wins, no matter how alluring the NBA Draft is. The jazz did some crazy things last month. It started off with a 109-103 victory over the Houston Rockets at home (recap). Then within the first two weeks of the month Utah went out and won both games of a road trip, beating the Sacramento Kings 122-101 (recap), and then busting up the ailing Denver Nuggets 103-93. The first game was a great display of teamwork, and the second was probably more about Ty Lawson and Randy Foye having bad games than any true brilliance on our parts. The road warrior Jazz then went on a five game Eastern Conference road trip and beat the Orlando Magic in a tank-off (no Ay-Ay-Ron for that game) 86-82 (recap), and beat the Charlotte Bobcats 88-85 (recap) as well. Utah then defeated the Los Angeles Lakers 105-103 (recap) in an exciting game where Derrick Favors had the game winner. The last win we had was at home, against the same Bobcats a week later, 83-80 (recap).

Over these wins the total margin of victory has been, well, small:

If you remove the Kings blowout the margin is only +4.7 points per game. Four of the wins were by less than 5 points. So a few lucky bounces, calls, and injures aside, perhaps this Jazz team is the team that I thought it was? Regardless of the wins (which were fun), the losses tell a more full picture of who this team is, but I'm not going to browbeat anyone about it. The good teams all kicked us to the curb early and often -- let's not forget losing to the Portland Trail Blazers by 32 points, and not being competitive for large stretches of our games against the Miami Heat, Indiana Pacers, San Antonio Spurs, and others.

But THIS month is going to be better, right? Of course it will. While it's hard to top a 7 win month for these Jazz (70% of our wins this season came last month), this might be even better. 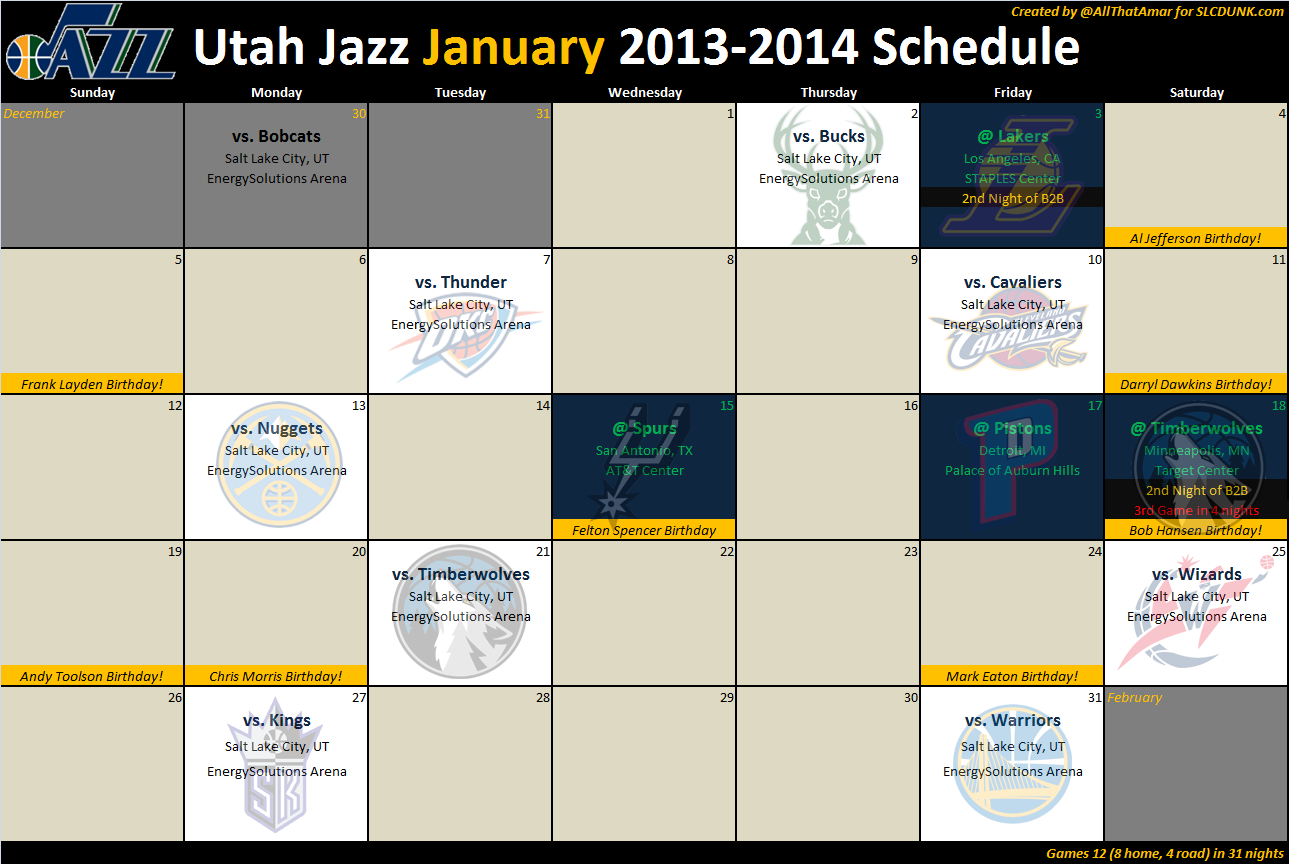 Yup, looks much better especially when you factor in all the rest the team will be getting each week!

So the Jazz play the worst team in the league right now, while they are in the start of a three games in four nights Western Conference road trip. We could be the "trap" game for them, and they aren't winning a lot, but did win 2 of their last 5 games. Still, we're at home, and we should easily win this one. The Jazz then go back to LA to play the Lakers again. They are super hurt at PG right now, and they (right now) have lost 6 games in a row. Again, should be a win. The last game, after three nights of no games, is against the Thunder. I honestly don't even care just as long as we are healthy and had good teaching sessions in between.

I feel like the team should go 2-1 this week.

Only two games this week, 2 nights off between the Thunder game and the Cavs, then another two nights off until we face the Nuggets. Lots of teaching this week. Hopefully winning too. The Cavaliers are a mess right now with all their injuries: we know about Andrew Bynum, but Kyrie Irving just had an MRI for his bruised knee. MRI was negative, but still, he's not at 100%. The Nuggets are also still missing Danilo Gallinari and JaVale McGee. I could see the Jazz winning both of these games, unless, you know, all the rest develops into rust for our young guys.

Four games! The big deal is the three games in four nights road trip. The Spurs are better than us and I don't expect a win. The Pistons and Timberwolves should be better than us, and their records indicate as such. Utah could lose all of these games and break the mini-run they were on. If that's the case I'm not going to feel bad. These are schedule losses in a way. The game at home against the Wolves, though, should be much more competitive.

Two more games after another three day "break" from games. Coaches better be putting in a lot of hours in non-game-playing development this month. We keep hearing about how that's more important than playing in games, so hope they do a good job with it. The Kings are just as bad as we are, and the Wizards are better but slightly banged up.

One more game, and it's against a team playing at a high level. This is a loss.