Let's get upset about something!

The NBA schedule was released last night, but it seems like such a small thing compared to the events that are happening around the world and within our own nation. You don't come here for news, you come here to escape, and enjoy sports. One of the most twisted, yet daily, things we Utah Jazz fans do is the self-flagellation ritual of finding things to be upset about and growing the small market chip on our shoulder. Thankfully the Los Angeles Lakers, via the NBA league office and schedule makers, gives us a great distraction for today.

Do you remember last season when the Jazz won only 25 games, and the Lakers won 27? Well . . . in a meritocracy these two teams are pretty equal in performance after 82 games. Of course, the NBA is not a meritocracy. This year's schedule once again favors the Lakers. 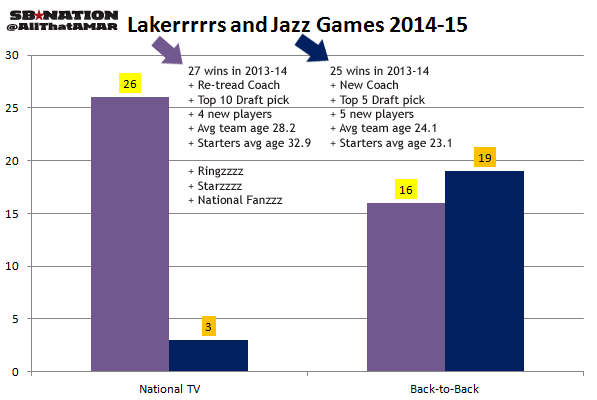 I guess having championships, and stars, and fans makes a difference, huh? I think the Jazz should be a more fun team to watch, objectively. However, subjectively, I am sure people are more interested in a team with actual stars: Kobe Bryant is going to be a Hall of Famer, and has five rings to help him get there; Steve Nash isn't the best point guard in NBA history, but he has been one of the best, most unselfish players in a selfish era, and has two MVP awards; Jeremy Lin is super popular and has fans all over the globe; Carlos Boozer was an All-Star before and used to dunk really well; Nick Young used to be part of a crazy team back in Washington in the Gilbert Arenas days, and he's dating a non-American, white, rapper right now. So, uh, that's something.

For me, and most basketball people, watching the development of Gordon Hayward, Derrick Favors, Dante Exum, Alec Burks, Trey Burke, Rudy Gobert, Enes Kanter, Rodney Hood, and crew seems more interesting than the death throes of two future Hall of Famers playing on a team clearly destined for the lottery again. But not every NBA fan is an actual basketball person.

In fact, according to the data we have, the vast majority of this continent are actually Lakers fans. 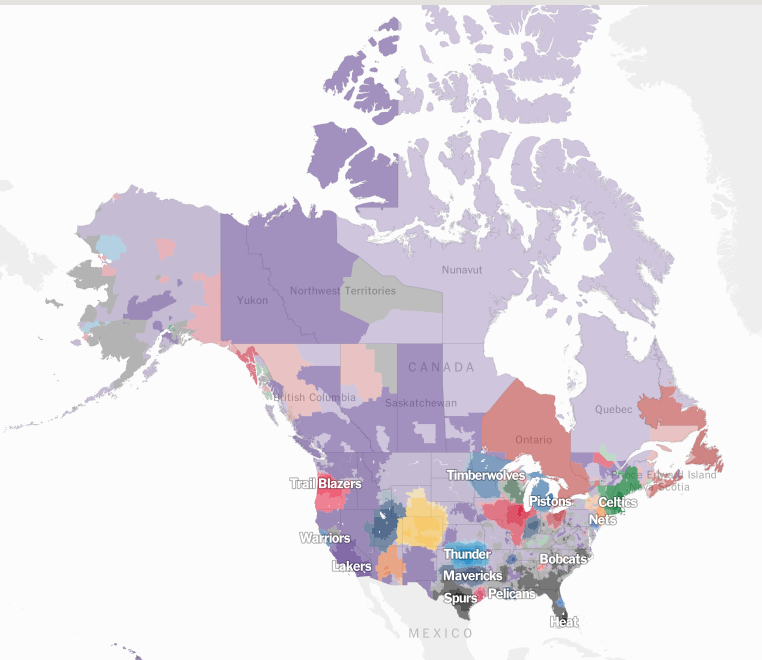 Sure, some are bandwagon people who show up only during the good times -- but this interactive map better demonstrates the actual reach of the Lakers. Heck, even I wouldn't be an NBA fan if it wasn't for them as I was first introduced to the NBA game back in 1984 when I was living in Los Angeles.

There are only 30 teams, and economics dictates that not every team gets the most shine. The Jazz are going to be a more fun team to watch this year, but the vast majority of the non-NBA team having media markets would rather tune in to watch the Kobe show.

It doesn't make me happy to announce that we have another thing to have a chip on our shoulder for. But it kinda does, because Jazz fans are -- inherently -- people who want to have something to be angry about. Thankfully this season ushers in a new period of normality for our fanbase, where we can direct our ire at the other teams, instead of each other. (Common enemy is always going to be LAL)

Our team isn't going to win a lot. But I'd be surprised if the Lakers weren't also going to be in the same boat at the end of 82 games. In their case, though, their failures will be televised.