The Jazz steal a must needed win in Toronto in Triple OT, Millsap is the new Korver, and Jody Genessy's baby is cuter than yours.

Share All sharing options for: The Downbeat: #887 It Was Big Al's Fault

The Jazz stole a game. It happened in Canada so hopefully they get across the border before the Border Patrol apprehends them. If you don't believe me look at the box score. The Jazz actually did not have a lead until the 1st overtime. 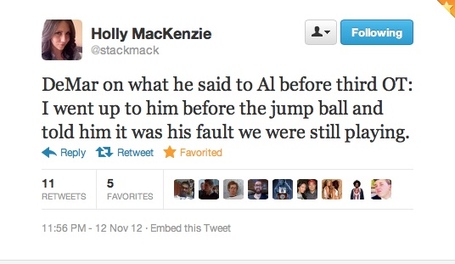 This whole thing was Al's fault. That three pointer was absolutely ridiculous. Big Al made that rim his own personal Plinko machine. In fact a few of my friends in Indiana texted me at the same time asking when Big Al had added the three point shot to his game. I say we keep that our little secret.

Bill Oram of the Salt Lake Tribune had some amazing tweets tonight. One highlighted a great Arrested Development reference which won this blogger's heart. But the tweet we are going to focus on is this one:

It's interesting that Tyrone Corbin brings that up. That 4OT game was a crushing loss for the Jazz on the road. The Jazz then went on to lose 3 out of their next 4. But after that they won 9 out of their last 13 games including two big wins in overtime. The Jazz looked like a completely different team in the overtime periods. In the first 4 quarters of the game the Jazz appeared to look like a team that wasn't sure if it could win or even how to win. By the 3rd overtime the Jazz looked like a team that knew it was more talented and would win. What are your thoughts? Does this game galvanize the Jazz for the rest of the road trip?

IS FOR 3s! Don't look now but Millsap is our best 3 point shooter. 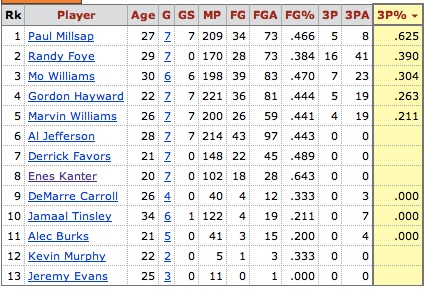 Obviously this was uploaded last night and doesn't have Millsap's amazing 3 for 4 night from long range but what should be noted is Millsap is a stellar 62.5% from the arc. Small sample size alert but Big Al is 50% for the year (small sample size, I know). Time to blow the dust off those old Okur kick out plays? Am I right?

The other thing we notice from these stats is Jamaal Tinsley has been awful from 3. He's probably the last guy you want to be shooting a 3. That dubious honor used to lend itself to Al Jefferson, but, recent events being what the are, that honor now resides upon Tinsley. Congratulations.

Hayward is having a rough year shooting the ball as well. In fact his 3 point shooting percentage has fallen every year in the league. His first year it was 44%, his second year it was 35%, this year so far it is a low 26%. His overall field goal percentage has dropped as well but not as drastically as his 3 point percentage. He is getting to the line more, but in almost every other category his numbers have dropped for the year. Something to keep an eye on.

I felt we needed to take time to remember AK-47. Yeah, yeah, I get it. The Jazz had a huge win. But the blogosphere was blowing up about the Timberwolves. The Timberwolves are down to about 3 healthy guys, an intern, and a toothpick due to injuries (I think there is a viral zombie outbreak as well. Trying to get confirmation on this.). Leaving AK, Pek, and I think the first 3 fans to the game. Anyway, CSKA Moscow The Minnesota Timberwolves are now 5-2, they lead the Northwest Division, and Andrei Kirilenko is playing like it's 2003. You can't help but feel happy for him. Especially when you see things like this:

In case you didn't hear, there's a little @DJJazzyJody (Jody Genessy of the Deseret News) in the world now. Introducing Jackson Drew Genessy. Congratulations Mr. and Mrs. Jody Genessy. Just to let you know, Jody, he probably won't be getting any extended minutes in a regular season game. If Burks can't get into the rotation in a triple overtime game I'm not sure how Jack is going to sneak past Ty. But he sure is cute. 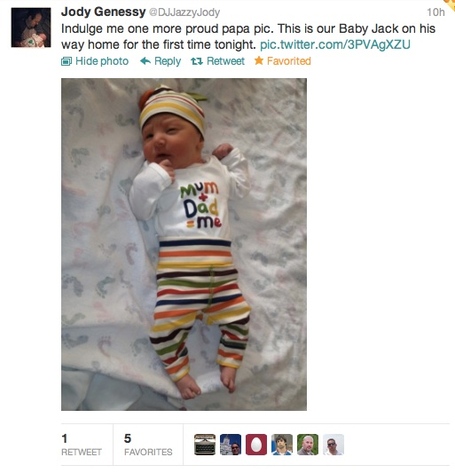