The Respect for John Stockton Edition - The Downbeat - #890

Share All sharing options for: The Respect for John Stockton Edition - The Downbeat - #890

If you haven't yet read Paul Flannery's piece on Big Al, do yourself a favor and go read it. I just love Big Al the person. He's a good guy and good teammate, and the kind of guy you root for. Just to add on to that a little bit, a few weeks or months ago I wrote about how Big Al worked out with Andris Biedrins at P3 and was/is a source of positivity in Biedrins' life when pretty much everyone else, including himself, is down on him. Another player--the Timberwolves' Greg Stiemsma--recently talked about working out with Big Al as well. From the Star Tribune:

From Al Jefferson, he learned attention to detail and the work habits required of a professional. ... For at least six weeks, the two trained together at Target Center and in Boston as well. "I was kind of his practice dummy," Stiemsma said. And low-post pupil, too. He watched and learned, and early on he fell for Jefferson's famed pump fake during one-on-one workouts. "I don't know if I ever blocked his right-hand jump hooks, but I could usually get the left," Stiemsma said. "It was a pretty good battle for me and him. We got after it. When a guy like Al Jefferson still is in here working hard on his post moves -- getting after it in the weight room in the summertime -- you've got to know this is your job and you've got to do all those little things that some other guys aren't doing just to be at your highest level."

During the Toronto game, the Jazz ran a promo for a Christmas ticket package featuring Derrick Favors in a Santa hat. They re-ran the same ad during the Boston game, but Favors' Santa hat was gone. Float your best theory as to what happened to Favors' hat (e.g. Steve Brown stole it because it matched all his outfits). 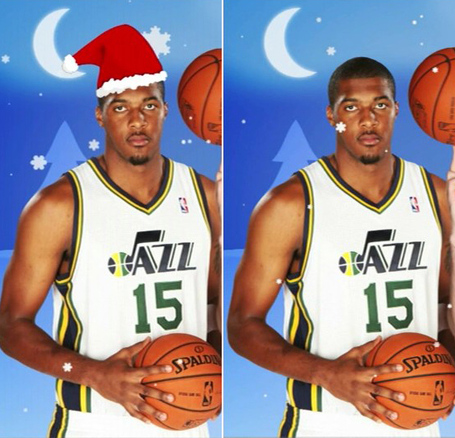 Here's some rare video right here from the great @JazzBasketball1 -- a Fox Sports "Beyond the Glory" documentary on Karl Malone. You know what's the best part about it? It's so long (UDQM).

As Diana mentioned in her DB yesterday, 2013 Hall of Fame candidate Gary Payton said that he would ask John Stockton to induct him into the HOF if he were to get in. I went searching through my archives to find the exact quote I mentioned in the comment section, and found these: (December 2010) KFAN played an interview between Locke and Earl [Watson] right before tipoff. Earl recounted how when he was a rookie, Gary Payton sat him down and told him that John Stockton was the one guy he looked up to, and that Earl was lucky to be in the NBA to be able to play against Stockton. Stock was the one guy Payton never trash talked to. (January 2011) Earl Watson: "Gary Payton never gives anyone any compliments, never. No one’s never better than him and everyone he can beat in one-on-one and they can’t score on him. So we were about to play Utah here in Utah [during Earl's rookie year] and shootaround was over … He was basically telling me that I was lucky to have a chance to play against [John Stockton] and I could see that that was Gary’s way of giving respect, but it was almost to the point where I was like, is Gary afraid of him? … He respected [Stockton] to the fullest, and [Stockton] was the only guy he ever gave credit to the whole time I was with him." Raise your hand if you respect Gary Payton more or even more for respecting John. *raises hand*

We're less than 10 games in, so it's too early to start drawing conclusions or making blanket statements. Then again, we're already voting for All-Stars, so why not. Through 9 games, Mo Williams is averaging 14.8 shots per game. That's most on the team. As a Jazz fan, how comfortable are you with your point guard taking the most shots on the team? (I don't ask this in the context of the end of the Celtics game, but more as a general question.)