The Downbeat #896 -- The Back to Business Edition!

Share All sharing options for: The Downbeat #896 -- The Back to Business Edition!

Thanksgiving is over! Or at least it is technically over; I'm sure most everyone has so many leftovers to manage that it wont be over for a very long time. Out of all the big Western civilization holidays that I celebrate, Turkey day is far from my most favorite. I don't know why. It's not that I don't have plenty to be thankful for -- I do. I'm almost always thankful for everything that happens to me, so I guess that dulls some of the poignancy a bit. (This may be the "I don't celebrate Valentine's day because I have all year round to be an appreciative lover" bit here.) Meh.

Being thankful and expressing gratitude are different things though. So let me say to all the readers here (Utah Jazz fans, NBA fans, other NBA Bloggers (fans or insiders alike), and random people Google searching for pictures of Mehmet Okur's wife in a bikini + "hot") that I am very thankful that you keep making SLC Dunk a part of your day. It means a lot, and is the number one motivator to all of us here.

Bereft of the great SLC Dunk community this blog would be like so many others. But this blog is something more primarily because of all the people who visit it, participate here, and contribute. We all love the Jazz and want to encourage them, enjoy in the excitement, cherish our legends, lament our losses, and glow with pride when new challenges are conquered. And we do it together, as a family of fans here and on other blogs.

I'm thankful for this community that has given me a home. Thank you, everyone, for being here.

And everybody shut up, I'm having a moment here! If you don't stop arguing and fighting all the time you'll be sitting at the kiddie table with Uncle Dale's weird kids!

Apparently the long play of our front office to not cut, buy out, or amnesty erstwhile starting shooting guard Raja Bell is paying off. Yahoo! Sports columnist, and overall super reliable barometer for NBA News, Adrian Wojnarowki (@WojYahooNBA) tweeted this stuff out yesterday: 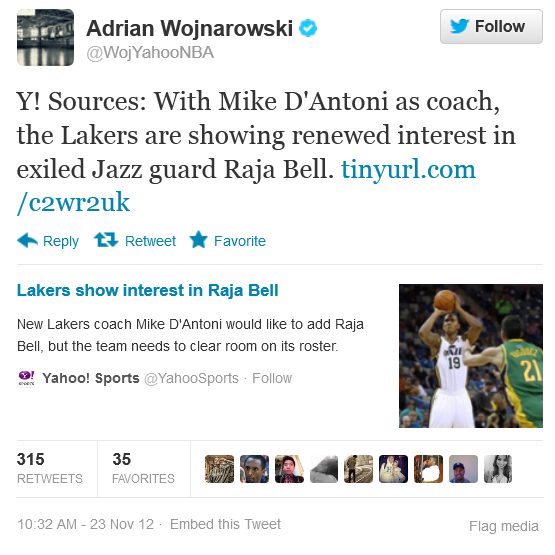 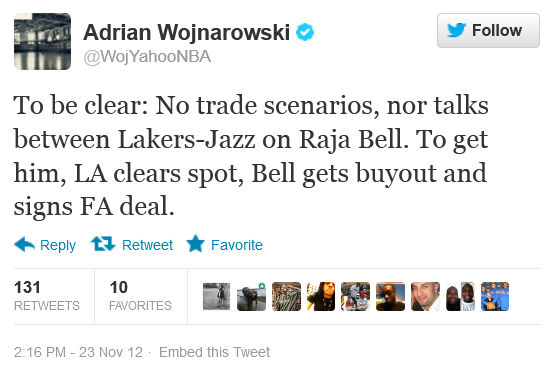 The main issue here is that, somehow, the Los Angeles Lakers are interested in Bell, but because they have a full roster, they don't currently have space for him. Thus, is it really worth it to cut someone, eat that dude's contract, and then add on $1.3m for the services of a guy who'll play behind Kobe Bryant for like 12-15 mpg? If you follow the link to his story he goes into it in longer than 140 character salvos:

"Bell is still under contract with the Jazz, but the team has allowed him to stay away this season until he finds a suitable offer and the two sides can execute a buyout. Once Bell has secured a contract for the veteran's minimum elsewhere, the Jazz will buy out the difference on the remaining $3.5 million on his 2012-13 contract. Bell wouldn't lose any money between the buyout and joining a new team.

"Utah has allowed Bell and his agent, Herb Rudoy, to search out deals elsewhere. The Chicago Bulls have shown some interest in Bell, too, but haven't made any offers, league sources told Yahoo! Sports."

Clearly this entire situation is crazy, and amazing. If the Jazz were to find someone to take Raja:

a) I'd have to stop writing about him for every game (in the injury update posts);

and b) it would afford the Jazz some more flexibility to make trades;

or c) most importantly, have the flexibility to sign on a player in the case that we get some asymmetrical injuries to one position.

Not to tempt fate or anything, but our FOUR oldest players on the roster are the FOUR guys most likely to be allowed to play point guard on this team. The lynch pin here still remains the Lakers and their desire to go through with biting the bullet financially to reunited Steve Nash and Mike D'Antoni with their Phoenix Suns 7 seconds or less Raja Bell team mate. If you look at the 'books' for the Lakers there are a few options that immediately pop up.

Who do you think the Lakers are likely to cut to make room for Raja?

Do you watch The Basketball Jones (#TBJ)? If you don't, you really should. Not only are they entertaining, but they are inspiring for me personally. Well, due to Thanksgiving there were no basketball games to really talk about for a bit -- and then 28 out of 30 teams played the next night. I'm going to embed the video from that night for a few reasons though. The first reason is that these are good guys who love to talk about the NBA. The second reason is equally important: the "who am I" headband game.

This is a game where you wear a head band and have to ask yes or no questions in order to guess who you are supposed to be (there's a name tag on each band). The reason why this is crazy is because J.E. Skeets (@JESkeets) has to ask questions to try to figure out if he is Jerry Sloan. The other guys know who he is, but he clearly doesn't. They don't help him much with their answers -- but I'm mostly upset that they even did one for Sloan. Perhaps I'm misunderstanding how this game works (I don't remember Charles Oakley wearing a head band for much of his career either), but Sloan didn't wear a head band. It's also hilarious, because as a coach (where we know him from) he OUTLAWED wearing headbands. No Jerry Sloan coached player has ever worn a head band. He's pretty much the person I immediately think of who is against them. So pairing Sloan with a headband would almost rightfully make you search for someone besides him. (Again, unless I am misunderstanding this game)

The long list of players who wore headbands before joining Sloan's teams who had to stop wearing them (Mo Williams (NCAA), Dee Brown (NCAA), Ronnie Brewer (NCAA), etc) and list of players who wore headbands after leaving Sloan's teams (Deron Williams, for starters) makes this even more amusing. In any party game like this a big part is listening and asking the right questions.

The other part is processing the information given.

Starting a headband game with Jerry Sloan is very rough because you're fighting against everything you know about the man and his views on head bands.

While Skeets didn't get Sloan for not knowing much about how he was as a player (and few non-obsessive Jazz fans do), I completely absolve him for this because of the logically near red herring of putting a headband on while trying to deduce you are Jerry Sloan.

How bad has Jamaal Tinsley been? Not bad meaning bad, but bad meaning good. This season he's had six different games of 6 or more assists, and in each of them, never taking more than 6 shots or scoring 5 or more points. In terms of a 3rd string point guard (and he is, as our depth when healthy goes as: Mo Williams, Earl Watson, Jamaal Tinsley, Randy Foye, Chris Quinn, Blake Ahearn, Michael Stockton, Torrey Ellis, Jeff Hornacek, Gordon Hayward, Sidney Lowe, Alec Burks), you don't want a guy taking shots from other guys -- while still setting the table and running the offense. This season Jamaal is AVERAGING 5.8 apg. That would have led the team last season. And the season before too if we ignore our team pre- Deron Williams trade.

Here are some of his lines this year:

Sure, that's Cherry picking some of his best games because he's getting more playing time due to opportunity. I agree. But he's killing it when his number has been called. If you do the math on ALL of his games in a Jazz uniform when he's played 20 or more minutes this is what he brings to the table:

This cat is 34 years old maan. Super solid 3rd stringer. I'd love to see him on the team next year to help mentor whatever pass first PG we draft this July. You know, not that I have any particular player in mind or anything. You want your PG to score, stretch the defense out with outside shots, and defend. Jamaal can't do any of that with any regularity (he did do well on D when it counted last night), but he's a pass first dude. And his passing so far this season has been first rate.

The Jazz play 5 more games this "month". We had to put in work to beat the Kings at home. We see them tonight in Sacramento. Then we have the Nuggets at home on Monday. Then we have a day off, then finish with another road trip: @ New Orleans Hornets, @ Oklahoma City Thunder, and then the next night @ Houston Rockets.

How many games do we win out of these last 5?