Okay, fine. We've won one game, and we've lost one game. I guess you can say we're winning half of our games. The sample size is super small, but so far this season we're batting .500 -- which is the normal probability for a two side zero sum game. So on any given night it's a 50 / 50 tossup. I think the general expectation is that as a Utah Jazz fan you are okay with the Jazz winning one then losing one; however, we're much more inclined to believe our team is "better than that". At least that was our own internal expectations going into the 2012-2013 season.

I know it was for me. I felt like the baseline was 43 wins, with the chance to get "up there" for 46.5 depending on the vagaries of the season. By the same token, though, dropping a game to a bad team on the road, when they're not playing with their best player (Eric Gordon), and their second best dude only plays 14 minutes (Anthony Davis) -- this is a game we should have won. Then again, maybe I'm being to hard on our Jazz? After all, dropping a game like this with those 'easy win' conditions is probably the most predictably "Jazz" thing to do.

Perhaps we all know that this is true, but didn't have a term for it yet. I propose we call this a "That's so Jazz" game. It's an undesired result of a loss to inferior competition, particularly due to injuries the other team may have. However, we can't get upset about it, because we have like 5 "That's so Jazz" games a season. The opposite also happens, when we beat a good team that's healthy -- like what our boys did against the Oklahoma City Thunder at home late last season, or the Miami Heat. (Seriously what other team beat both OKC and MIA last season? I know we did.)

So, we're a 50 / 50 team right now, but the true tests are the next two games: @ San Antonio Spurs, and then @ Memphis Grizzlies. The hot fires of all these early road games will make us better during our significant home stretches this season.

Speaking of 50 / 50 . . . we need to discuss Randy Foye. I do not know if I follow a representative sample of Jazz fans, but I do follow and interact with a bunch of hardcore Jazz fans daily. (The Uncle Dales out there may not care) The sample of Jazz fans that I do follow don't seem too hot on Foye, or either love him. There are no undecideds here. As our back up two guard, to do well you need only to do a few things well. For me those are: don't mess up the plays, don't be dumb by trying to over pass when you are open, make a respectable % of your shots, don't get killed on defense. Let's look at some of the quantitative data now:

Foye isn't perfect. He's not a disruptive bench 2, like we had when Ronnie Price was part of our SWARM line up. But he's shooting very well right now (shot 50 fg% last night, had 20 points, off the bench to lead all Jazz players). Do we think that Foye is going to shoot this well all season long? Most likely no . . . you only have to look at his career numbers to recognize that. He's a career .412 / .367 guy from FG% and 3PT%. He's hot right now. There are going to be games this season where he's not. We should be using him when he's hot though. So I'm not upset that he's getting so many minutes at SG right now.

Could Foye be effective playing on the floor, but off the ball as the point guard? Or could Foye be effective playing the 2 without a traditional set-up man at the 1? This is something for Corbin to wrestle with. Foye scored 20, made 4 threes -- and we still lost. Is it Foye's fault? Or the fault of the rest of the team for not showing up to beat a bad team playing without their two best players?

Btw, this was Foye's 24th time doing the 20+ points / 4+ made threes things in his career. His career has so far been 402 total games (regular season and playoffs combined). So. Yes. This was rare form for Randy. This only happens 6% of the time. Statistics all point to the eventual fall of Foye. So let's enjoy this hot streak while it lasts.

Can you guess which team is in the Top 5 in Three Pointers Attempted this season? It's the Jazz. We've attempted 42 three pointers in two games. By a point of comparison, we've only attempted 54 free throws in two games. Sitting out here in my rocking chair out on my front porch, I make a clicking noise with my denture filled mouth, and mutter about how this isn't "Jazz basketball".

I guess you could say that in terms of Jazz basketball, we've always demonstrated a desire to be FT heavy, as opposed to being 3PT heavy. In two freeking games, the largest known quantifiable sample size, we've done pretty much the opposite. We've taking more threes, we've never shot better from three, and the ratio of three point attempt to free throw attempt has never been close to 1 : 1. Over the last decade the ratio is 2 or more Free Throw Attempts per 1 Three Point Attempt. And we were usually bad at shooting threes which means we'd take less threes than league average, and make less than we should.

So while change is scary and bad -- and the results are that we're a 50 / 50 team right now -- perhaps this is the progress we need to make to be a good team. I just punched in the values for the 2011-2012 NBA Champion Miami Heat . . . and well. Their ratio of FTA to 3PTA was 1.55, and they have 2 or 3 Hall of Famers on their team. Ours for this season was 1.29 -- and we're sure go to the line more as the second continues (making our ratio more similar to them). The other major factor is that that Miami team too 1030 threes last season, and made less than what we're making this season. The ultimate factor, though, is that they shot 77.5 ft%, which is a mark we haven't reached in the entire last decade of Utah Jazz basketball. And we're shooting 50.0 ft% right now.

You gotta make getting fouled count. You gotta make your free throws. The team missed 6 free throws last night, if we made three more we win the game. And out of all the stats, the ones all of us can agree on (stat geeks and uncle dales alike) are wins and losses. (More precises, winning percentage, which is a ratio of games won out of total games played, but whatever . . . I have to dry clean my pocket protector now . . . )

Andy H.N. Tran (@HoodMetrics) seems to be another visual-spatial, nerd guy like I am. He's doing a better job of it though. He broke down all 30 teams in the NBA by their ages. If you're not a visual-spatial person the following link may not make much immediate sense. But the information presented here is pretty important.

I'm keeping this graphic small so you have to click on it to go to Tran's site. He did the work. He should get the click-through traffic. (And OF COURSE the link opens in a new window/tab. I know my HTML)

In terms of age, we're not too young and we're not too old. We're balanced. I think balance is going to be one of the buzz-words for the season. (And no matter what more popular or influential Jazz dudes you follow say, or how many times they say it / write it -- you DID hear it here first!) We are approaching a balance we have not enjoyed for years. In terms of floor spacing, youth/age, experience/inexperience, threes/free throws, offense/defense (work in progress...), and so on.

I can't believe our top two scorers are two PGs the Los Angeles Clippers were okay with losing. What I can believe is that Mo Williams (@MoWilliams on das twittah) is killing his team mates by catching them sleeping. Here are a few (taken from his twitter feed, which I guess auto tweets stuff from his instagram thingy, don't ask me. I'm not a technology nerd.) 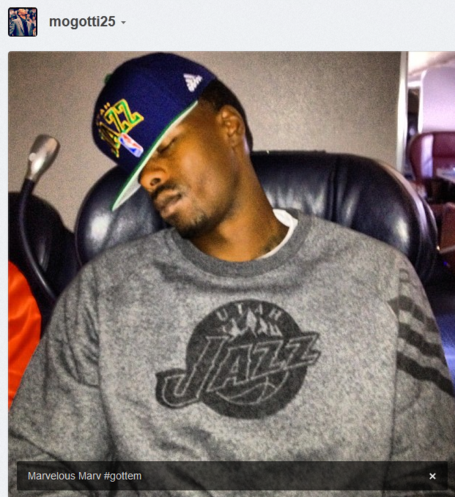 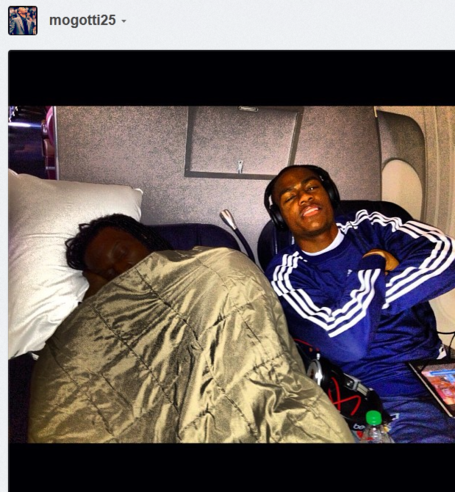 So far we have Marvin Williams, DeMarre Carroll, and some homeless man the team took pity on, and are giving a ride on their jet, have been #gottem. (His Hashtag, not mine.) Eventually, his team mates will try to get him back. But it's fun to see our players are already harmonious off the court. We need to approach that cohesion on the court too. I think we can.