Sundiata Gaines hits another game winner in his first game with a team. Meanwhile, would Alex Borks benefit from some D-League action?

Share All sharing options for: The Sundiata Gaines Deja Vu Edition - The Downbeat - #901

The Jazz have not had the best or easiest relationship with their D-League affiliates. Even though back in the day the Utah Flash ran the same system as the Jazz, it doesn't seem like the Jazz were ever committed to having their players develop there. For example, you'd have a player sent down for two games and then recalled due to an injury to a Jazz player. The player would then rack up a series of DNPs and stay at the end of the bench because he had already exceeded his D-League limit. Tyrone Corbin has been giving the "it's not him, it's me" speech in regards to Alec Burks for several weeks. "He deserves minutes, but it's just the way the rotation is right now." None of us really know where he is in his development, or what he has the potential to become. So here's the question of the day: Should the Jazz send Burks to the D-League for an extended period of time without yanking him around in the event of injuries? Do you think Burks would benefit from a stay in the D-League?

In case you missed it, Sundiata Gaines is now playing in China for the Fujian SBS Sturgeons. In a very, very deja vu way, his first game with Fujian ended in the same way as his first game with the Jazz. Sundiata hit a game winner off of a turnover by Qingdao DoubleStar Eagle Tracy McGrady (yes, this happened; 1:20 mark). Pretty damn awesome.

What is Mo Williams praying for? 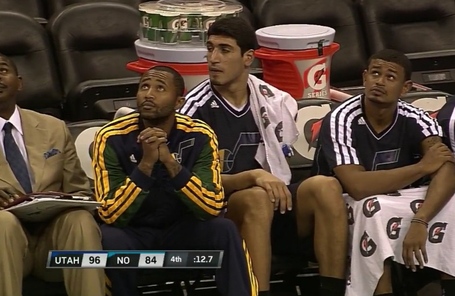 A getting to know you question that seems to be making the rounds lately: If you could have dinner with three people, dead or alive, who would they be? I don't think mine would be a surprise to anyone: Stockton, Sloan and Malone.

Matt Harpring seems to be on the call-three-games-get-one-free-night commentating plan, while Boler is frequently away calling football games or something. This has led to many games with either Steve Brown or Ron Boone filling in. In a perfect world, which of the two below make up the dream commentator team (and yes, you can *only* pick two)? --Craig Bolerjack --Ron Boone --Steve Brown --Matt Harpring --David Locke --Tom Nissalke --Audio manipulations of old Hot Rod games