Utah Jazz The Downbeat #914 - The "Worst Downbeat Ever" Edition

Share All sharing options for: Utah Jazz The Downbeat #914 - The "Worst Downbeat Ever" Edition

So the Jazz lost last night, another Friday night fiasco. I love how I always get to write DBs the night after something bad happens, ha ha ha. Well, SLC Dunk reader Kenn Chapman (@KennChapman17) tweeted this last night: 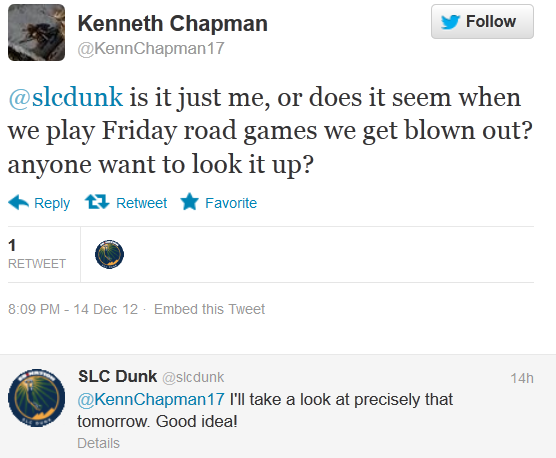 Kenn then did the work and replied back with the results: 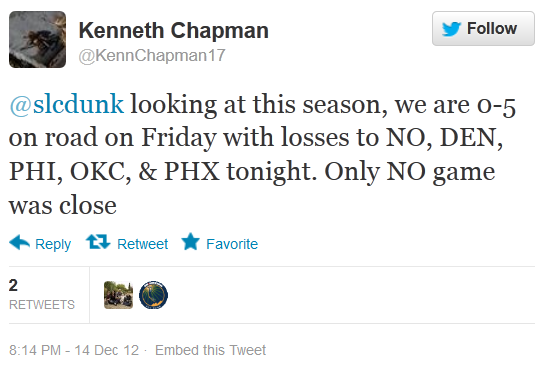 First of all, thanks Kenn! And secondly, being an insane person, I had to investigate this further. Was this just a road issue, or a Friday night issue? 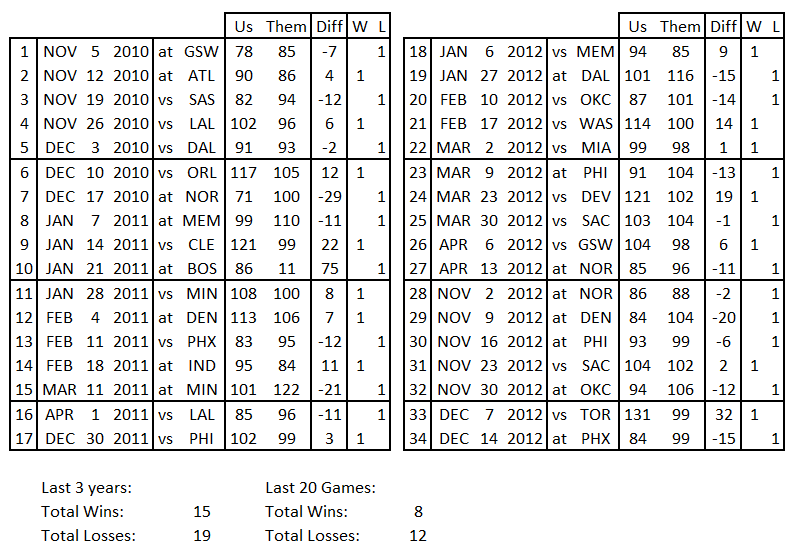 Over the last three seasons the Jazz are 15-19 when playing on Friday night. We're also a very bad road team, which we also already knew. 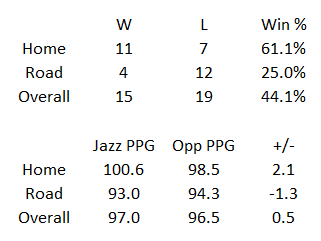 The really scary thing? I already knew this when I did an analysis of "how we do on which day of the week" way back in the off-season so I knew which night of the week to schedule the Guess the Game score contests on.

Well, now the Jazz have played 24 games in a 82 game season, which is approaching 3/10ths done. That's one way to look at it. Another way to tell how long this season has progressed is to gauge how sick you are of the current crop of NBA commercials on NBA League Pass. I've seen those John Turturro commercials for TNT a billion times -- you know, the one where he's some hard-edge graffiti artist? The really big budget ads this season appear to be those NBA Fantasy bball ads that have starred Warriors players Stephen Curry and Harrison Barnes; Cavaliers Kyrie Irving, and now Timberwolves forward Kevin Love. These are those "Not the fantasy I had in mind" tv spots.

I can imagine that we're going to keep seeing a few more of these -- even though registration for fantasy bball leagues has kinda ended already, right? Well, going back to my own non-My_Lo related fantasy, I'm pretty sure this season was "not the second year I had in mind" for Alec Burks.

But what are we really even getting with him now? It's not so much that our erstwhile lottery pick is playing poorly, it's that he's on that "only if something bad happens" development urgency that a number of former wing players we drafted were on (C.J. Miles, Morris Almond). That said, I recognize there's a super long list of things he needs to learn to do in order to get onto the basketball court. I admit, it's really hard for him to replicate the statistical anomaly of a 29 year old player shooting +5.9% better than normal. (That's a trick only age can teach) (And really, what's the bigger sample size -- the 1531 career regular season and playoff threes Randy Foye has taken, or the 130 he's taken this season?) Foyayphobia aside, Burks does not look anywhere close to being the player some of us hoped he would be; himself included. Well, I did the math.

So what has Burks done this season against what he did last year? How does it compare if you bump up his minutes? Well, yeah, I did the math for that too . . . so . . .

The first thing that really shows up is that he's getting to the line less, which hurts his bottom line efficiency. A big reason for this is that he's really only playing in garbage time, when the refs are motivated to let the game finish, and not call every single foul there is. So Burks is getting to the line less, and shooting horribly from it when he does get there. That second part if the larger concern for me. Last year he was a 72.7 ft% shooter, this season he's much worse -- and in the last 5 game section he's down to 50.0 ft%, which is worse than our younger bigs in Enes Kanter and Derrick Favors. The other major critical part is that his assists are down. Again, it's not like the team is running their sets at the end of the game so this is the "self-fullilling Morris Almond Doesn't Pass prophecy" all over again. (Almond did get assists when he was on the floor with Carlos Boozer and Mehmet Okur, not so with Kosta Koufos and Kyrylo Fesenko) When Burks did play non-garbage time with actual rotation players in this 5 game stretch he did record an assist. He's also had a number of times where he passed to the guy in scoring position, only for that guy to get to the line. So Burks doesn't get the satisfaction of being a guy who finishes or helps on finishing plays. Partly because of when he's playing, and partly because of who he is playing with.

On the other hand, Burks' rebounding is up, as are his steals and blocks. He's more active "doing the other things", and has taken the foot off the gas pedal on calling his own shots. His season averages are still reeling from the game against the Denver Nuggets in Colorado where he was super-duper pressing. But he hasn't necessarily killed it in his time when he's seen the floor over the last five games. Again, the beat a dead horse, he's missing way too many FTs if he wants to be an effective slasher in this league. His inability to manage a dime every game is upsetting as well, but that requires execution from not just him but also a potential scoring teammate. I understand that assists don't come easy in garbage time.

All that said, he's not getting it done. And one could argue he was better last year, when you look at the non-"just 5 games" stats.

See, if the top line is Burks from last season and the comparison line of data is Burks from this year we can see on the bottom line (the colored one) that he was getting bigger numbers last year. And bigger numbers as seen in the "per 36 minutes" values have limited actual value, but they are hard to ignore. Burks was way better last year. Oh, wait, there's some internet dust on that image. Let's remove some of that dust and see more of what it says.

Hmph. So it's not a comparison of Burks from last year and a comparison of Burks from this year at all. In fact, the top line (the "good stats") is actually Alec Burks this season, the middle line is Randy Foye this season, and the colored line is the difference between the two. All the green is Burks being better THIS YEAR. (Save for TOV being in red, which is also good -- the only bad here is AST). So this is horrible horrible Burks playing only in garbage time is actually having better numbers than our starter in a career year. (I guess this is that Narrative soup I keep hearing about...)

Crap. There's still some more internet dust on that image. Let's try to remove all of it this time.

Ah. There we go. It comes down to threes. So in effect, the only real way for Burks to beat Foye is to be better than Foye at the only thing Foye is better than Burks at. And the justification for starting a one trick pony over Gordon Hayward and playing that one trick pony over Alec Burks isn't that he "has more tools" or the young guys have "a number or things to learn still" . . . it's just that he's way better at hitting threes and spacing the floor. Our number one priority this off-season was to get three point makers. Our front office demonstrated that with aplomb. Why is it then a surprise to see them over-value three point shooters on the roster? I guess that's the doctrine now.

It's not that you're a better overall player, it just comes down to spacing the floor for our inside game. But the front office or coaches don't have to admit it. The numbers prove it, so it's an understood.

I guess the run around from fantasy bball ads for the league moving into the harsh reality of our team was totally not the downbeat I expected to write.

* Yes, I know that PER 36 minute stats aren't reflective of absolute on-court production. But they are a quantitative extrapolation of a more 'apples to apples' comparison on actual on-court production by evening up the amount of time a player has to do things on the floor. Clearly playing more means you will have to expend more energy over the long haul, and playing more means eventually playing with NBA quality starters who can finish plays -- so if you play more you may see a dip in some stats, but a boost in your assists . . . and so forth.

So, the All-Star voting thing is still a thing. I think the All-Star game is dumb and the way they pick people is dumb. (A vote assumes everyone is equally informed, which is one of my problems with our current political systems on this planet as a whole, but let's not get into it) I think the fans should get to vote in 5 dudes, regardless of position -- have the rest of the roster filled out by coaches -- but have the actual starting lineups be made by the head coach of the team. That way we still get the fan vote, and those 5 dudes get to play in the game -- but no more of this whole (eventual) whomever is on the Houston Rockets will start -- regardless -- business that we're all so afraid about. (Is this that Red Scare thing I keep hearing about?)

Anyway, the first round of "ballots" have been counted and there are no big surprises here. Former Utah Jazz player Deron Williams is currently #3 in East for guards though, so that must be nice. The Houston Rockets center Omer Asik has more votes than every person on our team combined. So yeah. If you could change one thing about how they select All-Stars what would it be?

Seeing how I'm now writing about National NBA news, Tom Reed dropped this recently. As always, it's some amazing stuff.

If SLC Dunk started to do more videos -- would you want some things like this? Like funny stuff? Or "funny" stuff? We have a cast of quirky characters here at SLC Dunk, and I think you guys would love to see some more of our personalities in our videos instead of just yelling all day long about defensive rotations in the halfcourt for hours at a time.

And don't forget tonight is the #GTGS thingy as well. Like, it's a free contest with real prizes (* dude, one of the winners from last year needs to email me asap so I can send him out his prize!). You all should be playing it!