Share All sharing options for: The Downbeat #920 -- Miami, Memories, and Making Moves Edition

The Utah Jazz play the Miami Heat tonight. Over the last three seasons the Jazz have defeated the Heat at least once. And over the last two seasons, the Heat have gone to the NBA Finals to represent the Eastern Conference. So they're a pretty good team.

Three seasons ago both of these teams were very different. We started Deron Williams, Ronnie Brewer, Andrei Kirilenko, Carlos Boozer, and Mehmet Okur. And the Heat started Rafer Alston, Dwyane Wade, Quentin Richardson, Michael Beasley, and Jermaine O'Neal. Yeah. It was a long time ago. The overtime game two seasons ago was the Paul Millsap Miracle in Miami. The Jazz were getting killed early, Jerry Sloan benched Al Jefferson, Kyrylo Fesenko came in and the Jazz played zone defense. They clawed their way back and Paul Millsap kept making threes. The "foul and try to make a three" strategy finally worked for once, but Deron Williams fouled out. With one more chance left to win the game C.J. Miles missed badly, Paul got the offensive rebound and finished the play to send it into overtime. We won on a crazy game winning FTMs by Francisco Elson after Ronnie Price broke down the Heat defense. Crazy game. Last year we won on a Big Al dish to Devin Harris who got fouled on a long two. How many irregular basketball points are in that last sentence? Big Al passing? Devin Harris making a long two? Still, he nailed the FT and we won the game. And Brian Zettler got some long needed cardio work after he made the shot.

Some other Western Conference teams have been able to do it two of the last three seasons, and very, very few have equaled our mark. The Jazz have a chance to make it four years in a row tonight; and have another crack at that in January 14th, 2013. Miami has won 5 of their last 6 games, and kept their last 6 opponents under 100 points. This is their last game before their Christmas day rematch with the Oklahoma City Thunder. If there ever was a chance of the other team looking past us . . . it would be tonight. 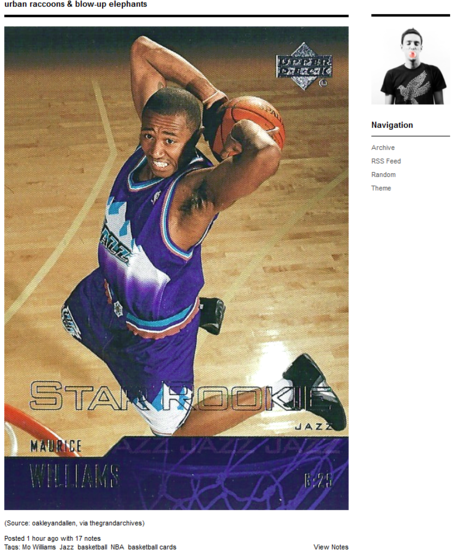 Skeets suggests that the photographer is saying "a little more Sprewell" -- which is a reference to THIS basketball card, also by Upper Deck. Because of fate, I actually HAVE two of those cards back somewhere in my room at my parents house. Funny stuff. I don't think that Mo was ever an above the rim player.

SB Nation's own Tom Ziller (@TeamZiller) wrote about 7 players who must be traded for the good of the NBA. The interesting point of view in this post wasn't advocating for how to make teams better; but rather to look at the best interests of the players themselves - in a vacuum outside of teams. It's worth the read. The players he mentioned were:

Ziller's main point is, and this is a direct quote, "One second more behind Al Jefferson is too many." He also suggests that Big Al and Tyrone Corbin may be conspiring to stunt the "growth of America itself". It's lugubrious, but the point is something we all understand. (Though a lot of Front Office Loyalists -- redcoats -- believe otherwise) The full roster at The Basketball Jones saw this post and they went out to talk about in more passionate terms on their latest podcast: The Overdose Ep #897.

They opine openly about Favors, Kanter, Jefferson, Millsap -- our offense, and our main trouble being defense. And yes, what we should do about it . . . check it out here! (It's the first main story they get into) It's a fun podcast, and they also go into Christmas gifts to buy for specific NBA teams, players, etc. Oh yeah, D-Will is their Wanker of the Week as well as they go to bat for Jerry Sloan.

Can you believe it? I went this far down without ANY stats! Well, now it's stats time. This year our huge problem is getting defensive rebounds. As a result, we give the other team more chances to score. And that hurts our bottom line. We may defend well, but let a ball go right back to the bad guys, or even worse. we seem to be losing a lot of those 50/50 balls this year. Right now the Jazz are 27th out of 30 teams in Defensive rebounding %. We're not particularly poor on any other place (we're not even bottom 5 in sending the other team to the line anymore!), the main problem is protecting our glass. The extra confusing thing is that we're such a fantastic offensive rebounding team, 4th best in Offensive rebounding %.

This is how we've looked over the last ten years:

That's a decade average of being 4.8th best in ORB%, and 13.3th best in DRB%. Two years ago we were 27th in defensive rebounding %, but we sucked at rebounding in general. This year? We're back above our offensive rebounding % average, but super-duper below average in DRB%. Everyone has noticed this, from fans to play by play guys. It's gotta be fixed. It's gotta be a team effort here. I really gotta point fingers here to the defensive rebounding by our guards and wings here. Per 36 mins all of our bigs average at least 5 defensive boards (and they all get at least 2.5 offensive ones). Heck, even Marvin Williams is averaging 4.1 defensive boards per 36 minutes. It's everyone under him. These are the loose balls, these 50/50 balls . . . all the big bounces off of missed three . . . these are the balls we're missing I think. It's hard to ask for more from our bigs, because they're also the only guys really playing defense in the first place (except for DeMarre Carroll). So, meh. Play better! Get more rebounds!

Why aren't we playing this guy more than 22.2 MPG?

Are we saving him for Summer League? Do we like giving up defensive rebounds?