The Downbeat #924 - The "Laughter is the best medicine" Edition

Share All sharing options for: The Downbeat #924 - The "Laughter is the best medicine" Edition

Okay, so we lost to the Golden State Warriors, at home, in a highly uncompetitive game . . . and we had really no excuse. So let's look for some bright spots, shall we?

Okay, there really wasn't much to be happy about. But at least we got this:

Via the Marvelous Moni

Last night's game was such a downer I feel like we need an upper. So, here's an old video by Jimmy Kimmel. Just in time for the season, too!

Okay, that's kinda funny and kinda dumb, but it eases my heart to watch that instead of re-watching last night's game.

Okay, so we're 15-15 right now and we've had a lot of ups and downs this season so far. I'm going to try to be *real* here. We're probably not going to be the #1 seed in the West this year. We're not going to be the #15 team either. We're really somewhere in the middle. And as a result, right now, we're really a .500 team. Mo Williams has been in and out of the lineup with injuries. Paul Millsap has been in a funk all year. Earl Watson is far from in game ready shape. All three of those guys are supposed to be some of our Top 8 players according to some.

It's not just the guys in their peak or a little grey in the beard who are under performing right now. Gordon Hayward and Alec Burks are both very shakey from outside and I don't trust either of their shots right now. Enes Kanter's superb defense and rebounding as a rookie has taken a step back this year (maybe for him to be effective on that end he DOES need to be heavier?). And well, Derrick Favors -- for better or worse -- is still playing less than half the game. And he's doing that for some reason. (What it is seems to change after every game)

We're not firing on all cylinders right now. We may not get a chance to do that at all this year. But we do still have a number of interesting parts. We're not the most interesting team to watch right now, let alone support, but I honestly believe that things are going to get better.

In January and February we have more home games, longer home stretches, and more time for practice. Our team needs a lot of practice. The first two months of the season had us flying to three or four cities every week. We were at a schedule disadvantage. Things on that end are going to be better going forward. 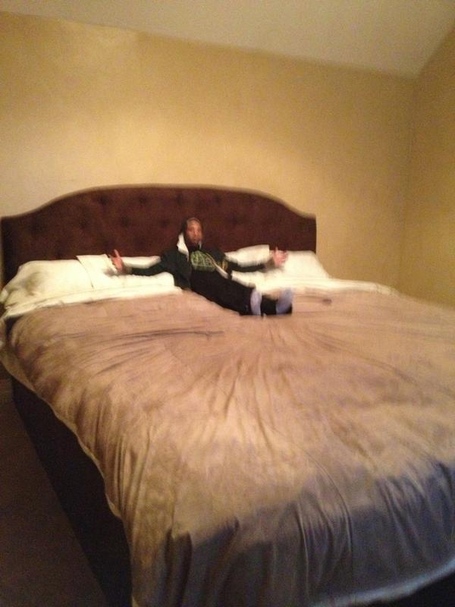 It's going to be better. It's not good now, I freely admit that. But it's not going to be like this forever. After all just LAST season we felt exactly this way before we went on our #PlayoffPush -- and we laughed at that. And then somehow we made the playoffs. I owe the Jazz a few more months before I crucify them.

Last night on twitter I made a joke about this being the Stephen Curry "revenge game" for how the Jazz gave up on Dell Curry (his dad) after his rookie season. You may or may not remember -- but Dell was a sharp shooter with few peers during his playing days as a combo guard (mainly a SG) with the Charlotte Hornets. He was a member of the Jazz in 1986-1987 -- and having him grow and develop with our young core of John Stockton and Karl Malone would have been great for all parties. It didn't happen as he was behind Kelly Tripucka, Darrell Griffith, Bob Hansen, and Carey Scurry on the wing depth chart. One could argue that Curry had the best career out of that group (save for Griffith who started off with a bang as the NBA Rookie of the year in 1980-81, though he never was an All-Star, Curry was the Sixth Man of the Year in 1993-94). Curry played in 67 games for the Jazz, then after being traded to the Cavaliers he immediately started scoring in double digits. He would score double digits for the next ten years in a row. He played 15 years in the league and finished with career averages of 11.7 ppg, and 40.2 4pt%. That's amazing when you look at the time period when he played -- back before the three point shot really became a common weapon.

Do we have anything like that going on this year? I sure hope not.

I'm actually going on holiday today. Can you believe that? By the time you read this I will be driving up the rectum of a midwest snow storm into Canada (where snow comes from). It will be a planes, trains, and automobiles type of situation I believe. It'll be hilarious. I hope to be posting regularly on my vacation, but just less frequently. I'll be back home in Detroit a few days after new years.

Don't have any house parties in my absence!