The Downbeat #925 - "Yes, Moni is also not doing this one too" Edition

Share All sharing options for: The Downbeat #925 - "Yes, Moni is also not doing this one too" Edition

I'm not going to lie, I love writing posts -- but there's a reason why I never even started writing Downbeats -- they're just not what I'm good at. I guess this week has been a point of reflection for me as when it ends I will have done Tuesday's Downbeat, Thursday's Downbeat, Friday's Downbeat, and tomorrow's Saturday Downbeat. I have come to a few awesome conclusions. The first is that Basketball John was a machine. The second is that I'm so lucky to be working with so many great Utah Jazz fans here at SLC Dunk. This really is a labor of love for me, and the reason why I've been so enthused to work here is because I honestly believe we have a really great community here. That's something which motivates me to not slack off -- or at least, gives me something to feel bad about when I do slack off.

Everyone else here makes my work here worth it, and also easier. I love the team we have here, and everyone's DBs are each like their own snowflake. I'm not good at aping other people's styles, so this week you've just had extra Amar-downbeats to contend with. For better or for worse, ha ha. The last revelation I've had is that I need to improve. And I gladly will put the effort into making improvements.

Have you been reading Moni's blog lately? It's always great -- but something she wrote really made me think. On her Game 30 recap she wrote this: 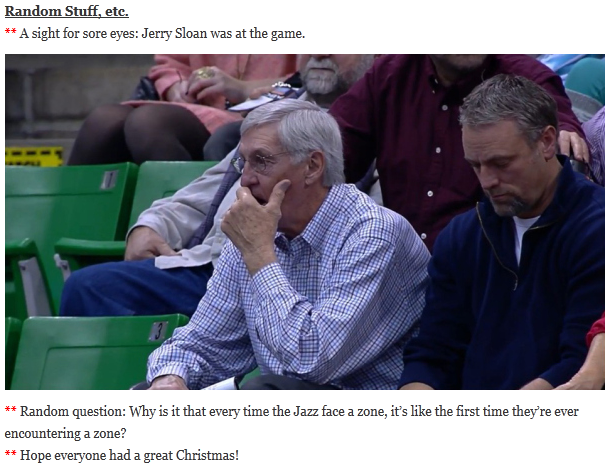 The first part is, well, do we ever win when Jerry visits? (Or more reasonably, when Jerry visits do we ever work hard enough TO win in front of him?) The Last part is "bah humbug" for me on a personal level because I was working late 4 nights in a row, and spent 7 hours in the same airport yesterday morning for a plane that never showed up, that wrecked all of my connecting travel aspirations. (Hence the lack of tweets)

The middle question is very interesting to me. I've noticed this as well and it really doesn't make sense. After all - when we have defensive practices (which must be voluntary) we practice PLAYING the zone defense. Part of that practice must be against a dummy squad playing offense AGAINST a zone defense. Right? Or do they practice playing zone defense against the coaches and auxiliary staff passing the ball around at half pace?

We should be both better at playing zone and playing against the zone. They kind of work hand in hand, don't they? Unless you work on it in a vacuum. Silly. I guess it's like the guys likely to play zone defense and separated from the guys likely to play against a team going zone. It's like segregated by gender health classes . . . how you guys ever going to learn to work it together if you don't first work with one another?

(Wait, I think I just misunderstood the point of health class -- it's not to teach kids how to have better sex, right? Crap.) Well, Zone defense is supposed to be the opposite there. It's a defense that only works with high communication from the participants. And on offense? You really need a leader and a game plan for exploiting it.

Both of those aspects should be worked on at the same time. And if we're better at Zone defense than we are at attacking the Zone on offense, what the heck is our offense doing? (Because we're inherently so much better on offense than defense . . . .) I guess jackpotting is the answer.

So tonight the Jazz host the Los Angeles Clippers, who are 9-3 on the road (we're 9-3 at home). Last night the Clippers soundly defeated the Boston Celtics 106-77 on TV. Right now they are the #1 seed in the Western Conference and have won 15 straight games. But you know what? I can't take them seriously. They are a very good team right now. But their historical legacy of being awful really makes it hard for me. 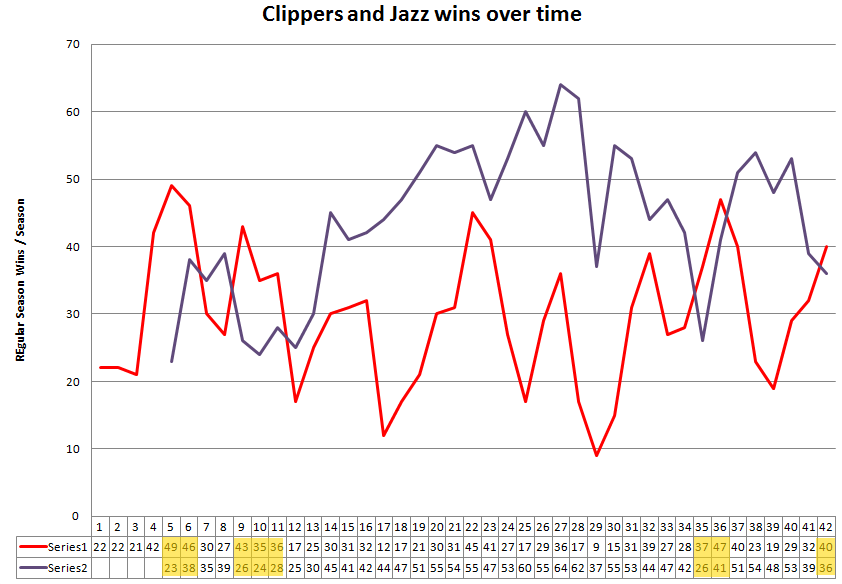 . . . but through ALL of history, the Clippers have been better than the Jazz 8 times not including this year. This year will make it the 4th time in the last 10 years though. But old biases are hard to get over. Last year, apparently, the Clippers won just 4 more games than us. That's what the data shows. This year they look to win a lot more than 4.

They're on the upswing and no one really knows what our team is doing. And the fans, who more than a generation were raised on always being better than the Clippers, are in for a rude awakening in games 31 and 32 this season. All of that being said -- I still have a hard time accepting that. These are the Clippers we're talking about. Ron Harper, and Loy Vaught, and Danny Manning, and World B Free and perpetual losers like that. I guess not this season right now.

15 wins in a row is something to be worried about.

But so is payback. The Clippers flopped like crazy last game in Utah. If Karma exists, we'll see a reversal of that tonight.

Let's hope that my flights and travel stuff actually work today, I'm currently stranded somewhere between point A and point B in the frozen Canadian North. In lieu of this -- please feel free to share with the class some of your craziest travel stories!

I'll start -- I once was on a plane for 28 hours straight. I was flying from Delhi, India (you gotta try their sandwiches) to Toronto, Canada. And the route we took was . . . adventuresome. The first big issue was I didn't think we were going to clear that mountain range thingy that everyone knows about. Then we started to fly over restricted air space, was told to drop down a few thousand feet and had a Sukhoi escort for a while. The Plane then experienced crazy turbulence over some of the more crazy nations we were (apparently illegally) flying over. The Russian winter was raging and hit us hard. By the time we crested the North Pole we must have been running on fumes, and "glided" over Greenland with only 2 of our 4 engines turned on to save fuel.

The worst part was that I kept drinking water every time it was brought, but I relieved myself zero times. Oh man. When I finally landed I ran to the airport bathroom with the speed of an irritated drug mule and almost didn't make it.

The great part was the middle seat I had.