The Downbeat #1170: The "This is only Preseason" Edition

Share All sharing options for: The Downbeat #1170: The "This is only Preseason" Edition

The Utah Jazz got their first loss of the season after being undefeated. Well, undefeated so far in the preseason. And after only one game. And this loss, a preseason loss, also doesn't really matter. Which is kind of like the mantra for this season. It's not if you win or lose, it's how you play the game. I don't expect the team to challenge for a title this year. I don't think the front office does either. That's not where we are. Where we are happens to be a group of players who for reasons of system still do not know where they fit together. And our players, coaches, and front office have to figure it out. (Honest criticism exists that, perhaps, you could have been figuring it out faster if you still don't know what to expect from three players going into their fourth season, but that is a discussion for another day) I wouldn't be upset if Tyrone Corbin tries different combinations of players all through the preseason, or regular season. This season is all about self discovery. (And I don't mean like that one Nastassja Kinski scene from the 1982 movie "Cat People", either!) And, honestly, I'm happy to see Ty switch things up.

His rigidity was a flaw in previous seasons. And it's not just that "we have clear cut guys, so we play them", he didn't deviate from the script much during preseason. And, here's a free tip: preseason is preciesly when you are supposed to try new things. You never know what you'll face during the regular season. (Example: not playing Alec Burks at the PG spot last preseason, and then because all the PGs are over 30 and injury prone, being forced to play him there during our regular season playoff push.)

Let's take a look at who Ty has started in the preseason over his entire career as Jazz head coach . . .

That last one, for Game 3 (tonight), is just a guess from Peter Novak. But I wouldn't be mad, it would just be Ty admitting that he doesn't know his players, doesn't know how they'll work together, and finally displays that he's trying new things now that his rudder (anchor?) Big Al isn't around. But the overlying principle here is that Ty doesn't try new things and the guys he starts in the preseason are most likely the guys he already has his mind made up to start in the regular season.

So keep moving pieces around Ty and don't fall onto old habit. Run the lineup Peter suggests, I'd love to see Kanter go up against Blake Griffin. Also, if anyone else in the world has seen that movie Cat People, I'd love to discuss it. Really crazy movie.

And seriously, it's only the preseason. Let's not go too crazy about it.

One thing I noticed is that Gordon Hayward has started almost every single preseason game Ty has coached. He looks to really take that next step for sure. His preseason numbers appear to indicate as much. So far this preseason he's averaging 14.0 ppg, 4.5 rpg, 4.5 apg, 2.0 spg, getting to the line 5.5 times a game, and effectively leading this team in his limited 26.0 mpg. With less than 10 minutes more a game do you think he could be approaching that 20 / 5 / 5 mark that distinguishes top level wing players? I would say yes. His shot isn't quite there yet (only 39.1 fg%), but his simple scoring efficiency (as seen in points per shot, PPS) is 1.22, which is ahead of the 25 year league average of 1.19. Yes, PPS isn't the most amazing stat, I'm just using it here to showcase that while his FG% is down, he's still effective on the floor as a scorer. 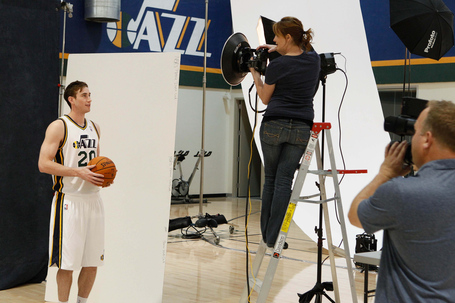 I think we all love the idea of Gordon having more responsibility on the floor and playing his game. One thing that we will be seeing this season will be just how well he adjusts to being one of the top guys on the opposing teams' scouting reports. I think he can succeed, and I think part of that is due to the huge question marks surrounding this team. Effectively you're going to have to guard everyone because on any given night I would expect one of our rotation guys to take the lead. For example if you try to lock down Enes Kanter and Gordon Hayward you're going to end up leaving Trey Burke open outside, and our guys are unselfish enough to swing the ball around to him. Of if you play for our pick and roll game and try to get the ball out of the hands of Burke, or defend the roll men well, a guy like Derrick Favors is more than capable of getting the ball to a Richard Jefferson, Brandon Rush, or Marvin Williams.

While we expect Gordon to be the leader day in and day out, I think the on court effect will be that big games will be spread around, making us a more dangerous team if we keep ahead of the curve and keep evolving ahead of the scouting reports.

You want to know what's new this year? (Besides sharing the load?) It's players sharing responsibility. We lost last night. It wasn't the best of games, but guys in this league are in it to try to win. After the game these are the tweets we got from BENCH players.

The lost last night was a hard one, but what is so good about the NBA is that we have another game tonight to bounce back. Learn from

Our mistakes last night and see how much more work we have to put In before the home opener. #WeROne #Jazznation #HardWork #StayHumble

Yeah, think about this. John and Ian totaled 25 minutes of play and were a cumulative +5 in +/- when they were on the court. They helped the team with 4 assists, 4 steals, 2 rebounds, and 5 points in limited roles -- but they want to help the team win. They're not happy or satisfied with coming off the bench, outplaying their opponents, and getting stats in a loss.

These are the type of guys you want on your team, pushing themselves to make themselves better -- if only so that they can help the team win more games. And this is preseason we're talking about. This is much better than collecting veterans who were used to losing and it didn't bother them anymore.

If you are familiar with the Utah Jazz schedule you'll see that after tonight's game, our first back to back set, the Jazz will have three nights off, a game at home hosting the Blazers, then another three nights off. 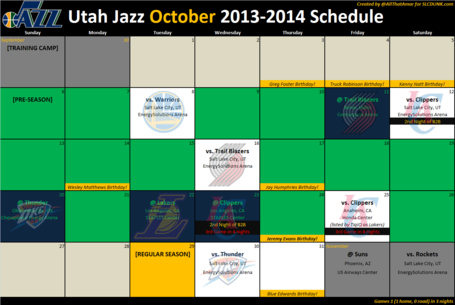 This is effectively a second training camp. And I think we're going to see a bunch of cuts this week, probably even before the Blazers game on Wednesday. Which sucks. But it happens every year. It's normal. Some of these guys aren't going to be here for very long:

I expect Cook and Jones II to get some more burn this next game. McGuire seems to do a little of everything, while Harris is a specialist banger. Machado should still have the inside track as we need more PG depth. Rumor is that John Lucas III will have tonight off.

Who do you think has earned the right to beat out the first wave of cuts?

No fifth point. I know all of you haven't read all of the Jazz previews we've put out already. Check them out: The Future is now; Time to Deliver; Hayward's off-ball genius; Kanter's time in the spotlight; and the Open door for our young core.

There are more previews to come still, about the players on the team, and stats, and stuff. So hold on! And keep reading : )