The Gordon Hayward is Unextended Edition - The Downbeat - #1187

the white elephant in the room, etc.

Share All sharing options for: The Gordon Hayward is Unextended Edition - The Downbeat - #1187

What state has the first regular season game left your fandom in? Stoked? Disappointed? In withdrawal for the next game (hey there, modernagejazz!)? Won't be checking in again until next year? Just incredibly excited about the future?

Randy Rigby on Oct. 30, talking about outside commentary and social media:

I think coaches also start learning, really, what voices they can respect, and have credibility, and what voices are just white noise and chatter. Voices that wanna have credibility, but liter–really do not have it. And I think coaches are very, these men have been in this business for a long time. And I think they’ve learned where they can look to and listen to and respect certain voices and comments and opinions, and those that they just have to say, “You know what? They’re just being chatter.” … Those in the know have a real respect, for the Jazz culture, the Jazz style, the pr–the steps that we’ve taken to be where we’re at today, the steps that we’re taking in really building and developing this team. And I think they really have a true respect of this team is a team that’s going to be continuing improving, and gonna be a threat for the future. And haven’t been a, and we don’t do mistakes. I think the people say, this team’s a, they’re pretenders. They’re not legitimate. And I think they have that respect for coaching staff, front office and ownership.

Caption this, or answer this: "What is Trey Burke thinking?" 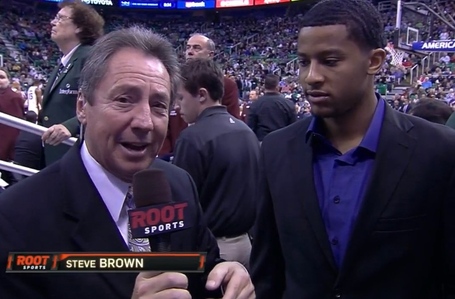 ICYMI: Ball Don't Lie's... Jazz preview; and Season Predictions. The only Jazz mention in the latter is...scroll to the coaching-related predictions.

So the white "elephant" in this Downbeat is that Gordon Hayward and the Utah Jazz were unable to reach an agreement on the extension. Both sides say there are no hard feelings and Gordon's reps said the max wasn't in play. [Read Peter's fantastic Downbeat on Hayward and his extension if you haven't already.] How do you feel about this, and how do you see this playing out?