Share All sharing options for: The Downbeat #1163 -- The "Master Chef and Moving on" Edition

UPDATE: SCRIMMAGE WILL BE STREAMED!

Good news... we will be live streaming the #JazzScrimmage on http://t.co/4IE9sKOhWT!

REMINDER: Jazz Open Scrimmage is tomorrow at 4pm. The free event is open to the public (no tix required). Details: http://t.co/7LR0MrzWES

The more info part from the site:

SALT LAKE CITY (September 12, 2013) – Utah Jazz fans will have their first opportunity to see the 2013-14 squad when the team holds its annual intrasquad scrimmage at EnergySolutions Arena on Saturday, October 5 at 4 p.m. MT. The free event is open to the public (no tickets required). Doors will open at 3:15 p.m. Jazz radio broadcaster David Locke will hold a brief Q&A on the court with each individual Jazz player so that fans can "meet the team." The scrimmage will begin immediately after the interview session.

Due to the high volume of traffic expected downtown on Saturday, fans are encouraged to take public transportation to the scrimmage.

The open scrimmage concludes training camp and the team will begin the preseason schedule on October 8 vs. Golden State at EnergySolutions Arena. In total, the Jazz will play eight preseason games (three home, five road/neutral site). The regular season tips off on October 30 when the Jazz hosts Northwest Division rival Oklahoma City Thunder.

And please take a lot of pics and put them in FanShots or FanPosts if you want. Let's start this season right! (And with an eventual dance-off between rookies Trey Burke, Rudy Gobert, and Ian Clark)

The next piece of important information (see, there wasn't only one) is that like the Autobot matrix of leadership the SLTribune's @TribJazz account is being passed down once again. From Ross Siler (@RossSiler) to Brian T. Smith ( @ChronBrianSmith ), to Brian T. Smith to Bill Oram (@Bill_Oram). And now from Bill Oram to Aaron Falk (@AaronFalk). 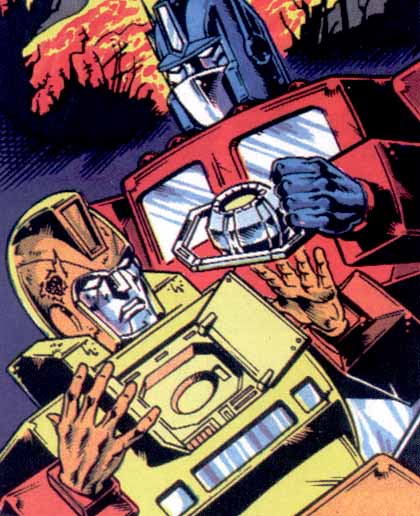 The dying Sentinel Prime passes the Matrix to Optimus Prime in this flashback scene from "The Legacy of Unicron!". This image is a panel or sequence of panels from a comic, the copyright for which is owned by either the publisher or the artist and/or writer who produced this issue. It is believed that low resolution pages or small excerpts may be used on Transformers Wiki under the fair use provision of United States copyright law. See Copyrights. (via tfwiki.net )

Huh? What? Utah Jazz blog? Okay. Yeah. I'm back. We're going to miss you Bill, you have a few more days here so please I'd love to chat with you on the phone, or via e-mail or something. I'm not hard to reach! Mr. Oram is going to the Orange County Register to cover the Los Angeles Lakers. No, this isn't a defection, he's actually studying them for weaknesses so he can report back to our front office. Best of luck Bill, and please keep in touch!

And welcomes are in order to Aaron! I hope you follow in the footsteps of the other holders of the @TribJazz account and engage with fans, ask the tough questions, and joke around with Jody (@DJJazzyJody) as much as possible.

In fact, I have no doubt that you will do all three.

Holy crap the season is almost here. If you weren't on the edge already this awesome video released by the Utah Jazz themselves should get you there!

David Locke (@LockedonSports), from everywhere and everything (dude probably sleeps less than I do) has been sharing some amazing things on Instagram. Check out this sweet Felton Spencer AUTOGRAPHED poster. In the history of the written word I'm certain those four words have never been used in that specific sequence before.

Anyway, did you know one year with the Jazz Felton shot 79 ft%? That was sadly the year ('94-95) where he got injured and only played in 34 games. The Jazz seemed to be cursed that when our centers are having good seasons or near their best, they seem to go down. We've seen this many seasons when Mehmet Okur would be tearing it up, but unable to keep out of trouble by the time we'd end up facing a team like the Lakers. In '94-95 Felton was near-beasting it with scoring 9 points, pulling down 8 rebounds, and sending nearly 1 shot back per game in addition to shooting close to 80 ft%. It's kind of sad to point out that this is one of the better lines ever put up by a center playing with Karl Malone.

Felton, it should be noted, was involved in ballet back when he moved on from the Jazz to play for the Golden State Warriors. I'm not making that up.

It's lunchtime. I need to get this out earlier, because I need to also get better / be better. But it is lunchtime and it's time to think about food.Two of our Jazz family felt it necessary to show the world what they are eating.

Erstwhile Jazz rookie point guard Raul Neto made something that looks like this. He also seems to have his headphones in the kitchen because he's a young 20 year old dude who doesn't understand how to do things like an adult.

On the opposite side of the spectrum, retired Utah Jazz center Olden Polynice is a grown man who is also an ambassador for a country, and not a young 20 yr old living with roommates. This is what he recently served up.

I just knocked it out the box with my garlic noodles, spinach and roasted crab a la crustaceans. Secret Kitchen??? pic.twitter.com/jNgIuDE811

So the question remains, who'd you rather have cook for you? Neto or Polynice?