The John Stockton's Gonna Be Doing What?! Downbeat

Share All sharing options for: The John Stockton's Gonna Be Doing What?! Edition - The Downbeat - #1199

I know you all will think I'm making this up, but John Stockton will be: 1a) Signing books at Deseret Books' flagship store (45 W South Temple) from 2:30 to 4:30 p.m. today; 1b) Signing books at the Fanzz store at EnergySolutions Arena (though Stock still calls it the "Delta Center") from 11:00 a.m. to 1:00 p.m. tomorrow. According to published info, Stock will sign one item in addition to his book and if you have not reached the front of the line by 1:00 p.m. you are out of luck. 2) Taking over the Jazz's Twitter account at noon today! (Seriously. For real. Wut.) 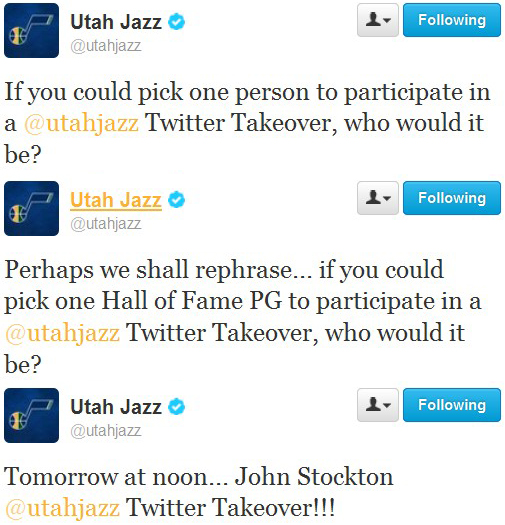 Richard Jefferson, who struggled early(ier) on in the season, was effusive in his praise for Tyrone Corbin following the Jazz's first win of the season:

I can’t thank, you know, coach enough, coach Corbin, for sticking with me. I know the last few games I haven’t shot the ball well…and coach Corbin’s been there. He’s a 16-year vet, and I know he’s under a lot of stress ’cause he wants to get the win. But coach Corbin’s doing a great job. You know, we’re just, you know, we’re, you know, he’s not getting the best poker cards right now, and he’s playing the cards that are dealt to him. And you know, just the way he handled the young guys, and you can’t get on ‘em too much because you need them to produce. But at the same time, being a disciplinarian. And you know, he’s done as well of a job as anybody as I’ve seen since I’ve been in the league.

We can't discount the possibility that Jefferson, who is in his 13th season and has been with the Utah Jazz for roughly six weeks, may have been completely sincere. Thanks to Diana, here's a list of coaches that Jefferson has played for in his career: Bryon Scott
Lawrence Frank
Scott Skiles
Greg Popovich
Mark Jackson
Tyrone Corbin Karl Malone was interviewed on 1280 before the Pelicans game and was asked what he thought was the one area where Enes Kanter and Derrick Favors need to improve. In answering, Karl digressed a little bit into expressing admiration for Ty as well:

Rebounding, loose balls, all those things are hustle plays. So those are the things that they gotta continue to do. If the ball on the floor, go get it. You know, rebound. Those are all effort. And these guys continue to do that, if you get 10 rebounds today, get 12 tomorrow. If you get 12, get 13. And now you become a team that's start to do the little things. Let me tell you something. I am a humongous Tyrone Corbin fan. People need to realize that. That guy have a tough role to hold. But what we gotta do is continue to support him, which, that's what we're doing. That's what the Jazz are doing. But our guys, unfortunately, Tyrone and the coaching staff can't go play. You know, the players got to play. But I think our big guys gotta continue to be a force, put pressure on the defense by running the floor. Running wide. All of the things that Jer--Coach Sloan taught me. Now, effort is a thing that you always have to give, is effort.

What do y'all think of the NBA's Christmas jerseys this year? Would you buy these undershirts jerseys if they were made available for the Jazz?

Why was Alec Burks so sad after he missed this dunk?

I personally love hearing Booner on the call due to his random insights and incomparable unintentional comedy. If it were up to you, which of the following two would be on the call when you watch Jazz games and which two would you strike off the list forevermore? Craig Bolerjack
Matt Harpring
Ron Boone
David Locke
Alema Harrington
Thurl Bailey
Phil Johnson
Steve Brown
[fill-in candidate] Amar will tally the results and display them in the form of fancy charts and tables at a later date. Note to Amar: Please tally the results and make fancy charts and tables.