Assists. Last night the Utah Jazz had great ball movement. When I originally put this in the downbeat they had 19 assists they finished with 35. Wowzers. Yes, part of this was lack of defense from the Sacramento Kings, but the assists started early and never really stopped. You can watch all 35 of them by going here and clicking on the 35 in the box score.

I thoroughly enjoyed Amar's post the other day about the connection between fans and information. It's not just sports...

And really, what the internet has done is that it has lowered the bar of entry. And that's why if you interact with staunch traditionalists they are really snotty at times to their ‘new' audience.

This is happening in many other fields as well. Kids are coding and creating video games in middle school. High school kids can take classes online from Harvard, MIT, Stanford ect. News is being tweeted and filmed as the event is happening live i.e. Egypt, Syria. News stations are just reading from Tweets and sharing videos that have been uploaded to Youtube. Fans have access to almost the same exact information as insiders, but this is not a bad thing. This allows for more educated fans, more connected fans, and a better fan experience.

Alec Burks. Shums talked about this yesterday, but here are some visuals. 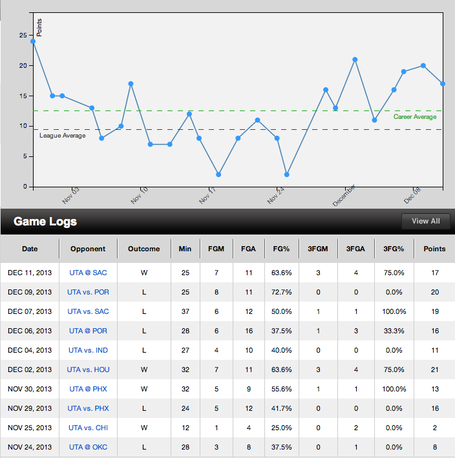 His efficiency is getting better and he is understanding his own game more. He knows that he is shooting well, and is continuing to play within the offense. Minus the Chicago game, his minutes have been around 30 a game and the transition to his natural position is helping him thrive. and

Speaking of Jazz fans... Here is another die hard.

What are your favorite Jerry Sloan Memories. David Smith talks about his over at Salt City Hoops. I love the idea of a collection of personal and not so personal memories being put into a book or memoir or something. I think that Jerry, along with the late Larry H. Miller did so many things that we never hear or read about. Share your favorite Jerry Sloan memory below.