Share All sharing options for: The Downbeat #1229 -- The "Rookies, man" Edition

The Jazz have 7 wins in 29 games. That's a winning percentage of 24.1%. That's pretty low. I felt as thought the Jazz would win 21 games this season. They are a third of the way there by wins. It's very "easy" for them to win 14 of the next 53 games right? That would be winning 26.4% of their remaining games. Totally doable right? Right? Well. I hope so. Let's look at the schedule:

It's very likely that the Jazz will win more than 21 games this year. Which is a feel good story for me, but may suck on the ping pong balls side of things.

Tonight the Jazz play against the Charlotte Bobcats and their amazing defense. The Bobcats suck on offense, but are shutting teams down on defense. Teams are only scoring 93.1 ppg against them. That's pretty low. For a point of reference, the Jazz score only 92.8 ppg. That's educational and sad at the same time.

More interesting is that this team is shutting teams down with Al Jefferson in the middle. Big Al is shooting his worst fg% of his career, 44.3%. He is, on the other hand, getting to the line way more than he did with the Jazz. He's getting there back to his post-surgery days with the Minnesota Timberwolves. I like it. I like Al doing well. (He wasn't thriving here, btw.) Let's celebrate Big Al. In his career he has had 152 different 20/10 games in his career. He had 51 with the Jazz. He played in 225 games in a Jazz uniform (regular season + playoffs combined). 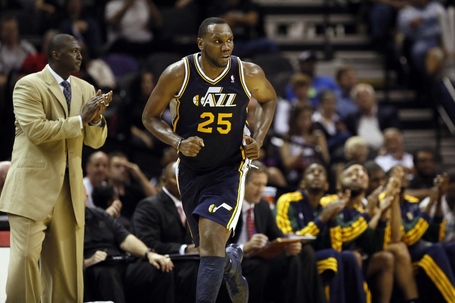 Trey Burke is having an up and down season. The game after scoring 30 points and drilling 4 three pointers on a 12/20 shooting night he ended up with 2 points, off of 1/8 shooting. Consistency is just something you develop. And at the professional level it's something that doesn't come over night. Just look at John Stockton's rookie year, his shooting (while more constrained) was kinda all over the place too.

But back to Trey, he has scored at least double digits in 12 of his first 17 games. That's not bad. And he's gone for 20 or more points four times already, hitting 30 once. He's a different type of guard playing on a different type of team, and has different responsibilities. Especially on the 2013-2014 Utah Jazz we need him to score. And that's something he's capable of doing. The problem right now is his scoring volatility. Trey's scoring average right now is 12.82 ppg. His standard deviation for scoring points this season is at +/- 7.54. You may have noticed that nearly 8 is over half of nearly 13 just with the eye-ball test.

If you calculate it out his volatility is a whopping 58.83%. That, while numerically accurate, seems too high. If you knock off his last two scoring games (30 pts and 2 points respectively), because they are the highest and lowest scores, things naturalize a little more. He's then scoring 12.40 ppg, his STDEV is +/- 5.95, and his volatility is still a huge 47.98%. But at least it's not 60% anymore.

Trey's effort is there every night. Sometimes shooting is just how the ball bounces or hits the rim. As Trey gains more experience at this level his volatility will decrease and he will be a much more consistent shot maker in the future. He's already killing it with his assist to turn over ratio. So I have ultimate confidence in him.

Our other two rookies this year, Rudy Gobert and Ian Clark, are down in the NBA DL right now. They've both played in three games and these are their numbers:

We looked at a frame of reference for the NBA DL a while back, and I think it is clear that Gobert should dominate these guys. Clark being a generalist is good too, but it would be good if he could pick his scoring up -- it's currently below the averages of Morris Almond (22.7 ppg), C.J. Miles (14.6 ppg), and even Kevin Murphy (13.2 ppg) right now.

No Trolls please, but if this was Coach Tyrone Corbin's first yr, how would you rate his performance (1-10)? Disregard preview seasons.

What score would you give Ty?