Share All sharing options for: The Downbeat #1235 - The "We're actually winning" Edition

The Jazz beat the Lakers! And the team is winning increasingly more Friday night games. This is basically all you need to see:

What happens in this play?

I think this play design is MUCH better than what we did at the end of games the last few seasons with #MOLO or Alfense. Did Tyrone Corbin design this play, or merely sign off on it? (We did add new coaches to the staff) Would I have done anything differently? Well, maybe replaced Hayward with Burke, but other than that I think the play obviously worked.

How much of that is our brilliance, and how much of that is the incompetence of the Los Angeles Lakers, effectively playing their "we are down by 30" unit against the guys who should be starting for our team? I also don't know.

Enes Kanter, huh? Did you know that he had a higher PER value in four games he played against the San Antonio Spurs in the playoffs than he has this season, as a former starter: 12.7 to 12.3? This season he's showing career lows or worsts in Offensive Rebounding rate, Defensive Rebounding rate, Total Rebound rate, Steals rate, tied for worst in blocks rate, lowest in ORTG and worst in DRTG . . . and not surprisingly this is all reflecting in his PER 36 stats as well.  He's gone down from 11.5 rebounds per 36 to 10.2, and now this season down to 7.9. Of course, he's not getting close to 36 mpg, he's playing only 26.2 mpg.

If you are a Claytonite and believe that a player has to earn their minutes (mostly outside of NBA games) then you are left with the conclusion that Kanter isn't earning anything. And he doesn't deserve to be on the court. I want my players to be great in NBA Games, and not be great in practice. (Back in my playing days I knew how to house the guys on my team, and burned them in practice and started for my team -- but I knew they were better than me. Or had the opportunity to be better. I hurt my team by playing in front of them as I did not give our team the best chance to win. I just had the best chance to beat my peers ON the team because I played with them so frequently. Sound like Big Al or Sap yet?)

In my opinion being good in the games means actually playing in the games. You want to be good at game speed, not great at the half speed, non contact drills to see if you can hit a pick and pop jumper over Mike Sanders. You're never going to be able to do that if you don't play in the games. (Unless you want to be the All-Star of hitting jumpers over Mike Sanders.) I was that All-Star. I knew how to excel in all the drills because I used to watch my older brother play on the bball team in practice for years before I tried out.

I was a crappy vet.

And I think Kanter-types need to learn as much as possible in order to feel comfortable and confident on the court. Confidence is the only currency for a young player, they may or break careers. Our franchise seems to want to eliminate players coming in with confidence (who else remembers the reports of Deron Williams crying on the phone to his old college coach during his rookie year). I can see the Jazz org's point of view on this type of "break him down and build him up"  method. But these aren't 18 year old GIs. These are 20 year old multi-millionaires. Times have changed. The Jazz are paying Enes Kanter $4.5 million dollars THIS year. Perhaps we need to recognize the 'shaming method of motivation' isn't working on a guy who spent his life flustered and in a shell because of that (his dad was apparently a hard arse).

Or at least let him tweet pics of him and fancy ladies again. He seemed like a much better player when he wasn't playing but happy, instead of unhappy and also not playing. 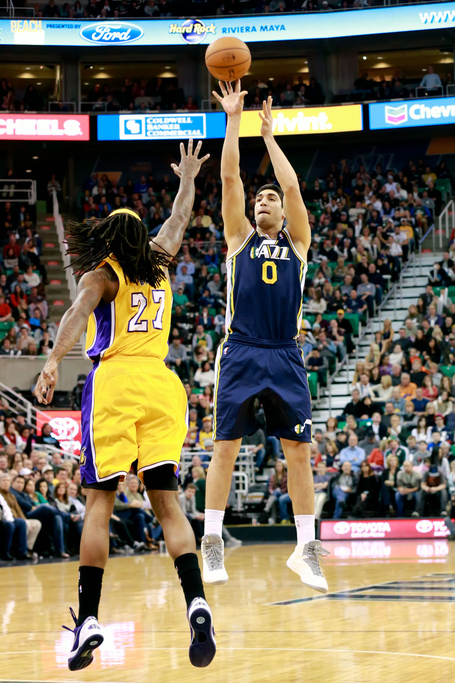 But hey, maybe he needs to earn his minutes. Be a better three point shooter than Marvin Williams, Enes. That's all you have to do to start again -- oh yeah, you're not allowed to shoot three pointers. Okay, so how is this not a self fulfilling prophecy of failure now? Or maybe it's a no lose situation for the Jazz. Either they don't play a guy and he never gets better, justifying not playing him; or they play a guy and he's not good, justifying having not played him earlier in his career.

When your system is set up to always deflect blame do you ever introspect to get better?

According to ESPN's Coach David Thorpe (@coachthorpe), our very own Trey Burke has jumped to the top of his rookie rankings. (Full In$ider article here) I'm not going to copy and paste the entire thing here, but if you have means of getting this article you may enjoy some of it! Here's an excerpt:

"His poise and overall understanding of the game are already above that of most young guards with more playing experience in the NBA. Watch him attack the paint off ball screens or out of isolations. See him play with patience most of the time. Admire his ability to use his body to create space or pivot around defenders who get too aggressive trying to take away that space. He is showing the willingness to be his team's best player and scorer when the situation calls for it, not being content to be just a ball mover who feeds his veteran teammates.

"As we look forward it will be hard not to expect much more from Burke, who has found a way to dominate games despite his lack of size and elite athletic ability, because Utah's schedule will get easier (the Jazz have played the most difficult schedule in the NBA so far). Plus, Burke has proven he has the ability to improve (like he did from his freshman season to his sophomore season at Michigan), which should give Jazz fans more reason to smile." - D. Thorpe, ESPN, Dec 27th, 2013

For those keeping score at home, yes, the Sixers guard Michael Carter-Williams is killing it in his per game statistics; but, Trey is helping his team win games. Most sites have Trey in the Top 3, and that's really where he will be this season for sure. Rounding out the Top 10 for Thorpe are: Tim Hardaway Jr. (Knicks), Giannis Antetokounmpo (Bucks), Mason Plumlee (Nets), Steven Adams (Thunder), Victor Oladipo (Magic), Nate Wolters (Bucks), Matthew Dellavedova (Cavaliers), and Hollis Thompson (76ers). Rudy Gobert is at #21, Ian Clark is at #32.

The two guys the Jazz traded away for Trey are #33 (Gorgui Dieng) and #44 (Shabazz Muhammad). So, not bad, Dennis Linsdey. Not bat at all.

I only expect the legend of Trey to grow as the season goes on. He was my pre-season ROY, and I'm sticking with him.

If you have been enjoying the Tyrone Corbin fanfiction by Bitoko this season be sure to follow along on his blog! (As Moni so smartly pointed out to me)

Awesome stuff, keep it up! I appreciate humor and satire. These are not personal attacks.

Earlier this week I asked if Gordon Hayward should post up more. In that post 225 people voted, and 84% of you said that he should. 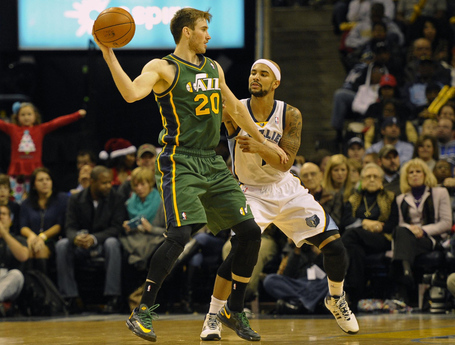 Well. according to the data he's not that great at it at the NBA level. And this is interesting to me as he continues to be matched up against people that he is bigger than.

He doesn't take the shot, or get fouled, or turns it over much when he posts up. It's rare. We don't have data on how frequently he passes from the post. (And this is really where I think he could excel). He doesn't shoot well, and clearly learned the game from a faceup position, and not a back down position. That's understandable as he was a guard growing up and plays guard at the NBA level. He's just taller than Charles Barkley, that's all.

I feel like not posting him up automatically goes against a legit size advantage that the team has. One ongoing criticism of Tyrone Corbin that is valid is that he does not deviate from his game plan to adjust to events during the game. (What? Josh Howard sucks against the San Antonio Spurs in the playoffs? That's okay, he'll start at halftime too.) I think that during the course of the game Hayward does get matched up by guys who are 6 inches shorter than him at time. That's half a foot.

Back in the Jerry Sloan / Andrei Kirilenko days the Jazz would run a cross screen for Andrei in these situations, get him the ball close to the rim -- close enough where all he had to do was catch, jump, and either make the layup or get to the free throw line. In the off-chance that they actually did post Andrei up, he had the floor vision to make a good pass to a cutter. (Remember cutting, Jazz fans?) Twice in the same season Andrei made "between the legs of the defender passes" to Carlos Boozer for dunks.

I don't think that Hayward has the floor vision of Kirilenko form the post, but never trying him there is being a tad too conservative in a year about experimentation. Sure, it works out better when you have more guys who can space the floor and cut hard. But at the very least if we can't unlock Gordon's passing from the post (which the table above has no data for), we can at least use a missmatch. You know, adjust to what's happening in the game?

The data doesn't support the concept, but the hypothesis hasn't yet been tested for. Most of you seem to agree with the hypothesis.

Gordon's not a great post up scorer. But could he be a solid post up passer, and opportunistic post up guy to draw fouls? I think so. But I've never been a slice of cheese before, so I can't comment on if a sandwich tastes good. And I've never been an NBA Head coach, so I can't suggest strategy.