Share All sharing options for: The Downbeat #1217 -- The "Palate Cleanser" Edition

Okay, so last night was bad. How bad was it? Well, it almost left our best writer The Shums speechless in his recap -- read it here. So far this season the Jazz are 1-10 on the road. It's hard to win on the road as a young team, harder still as the Utah Jazz. Even back during our Deron Williams, Carlos Boozer, Mehmet Okur, Andrei Kirilenko days our squads leaned heavily on our home records. So what I'm saying is that last night's loss was expected. Did we expect it to be so bad? No. Some of us even knew Portland had one of the best offenses in the league because of three point shooting. Oh well, I guess our coaches did not game plan for that.

That probably is the least unexpected thing out there. But you know what's even MORE surprising?

To me what is more surprising is Hall of Famer, and generally amazing person, Karl Malone ending his long time feuds with former opponents. Do you remember back in the 1999 playoffs when he and Portland Trail Blazers forward Brian Grant had their 'fight faces' on for an entire series? These dudes are friends now!

That's a great story of Northwest Division camaraderie. But I'm not that big of a person to make it seem like everything is okay. We should have won that series if we were healthy, Jeff Hornacek was a shell of himself then. The Mailman did kick BG's butt though, in the series.

Brian didn't get a double double, but he did enough to spoil the party. Had Malone gotten any help in the series he may have had some gas left in the tank to shoot better in Game 6, and then the Jazz would have had a Game 7 at home -- and possibly have gone back to the NBA Finals.

I know that that '99 series exists in the mists of the for some of our younger readers. I remember it vividly as I watched this series end in a hotel room in Baltimore. But that's a story for another day. Almost like this screen shot from a basketball game of that era . . . commemorating this matchup . . . but having Malone go up against Rasheed Wallace. 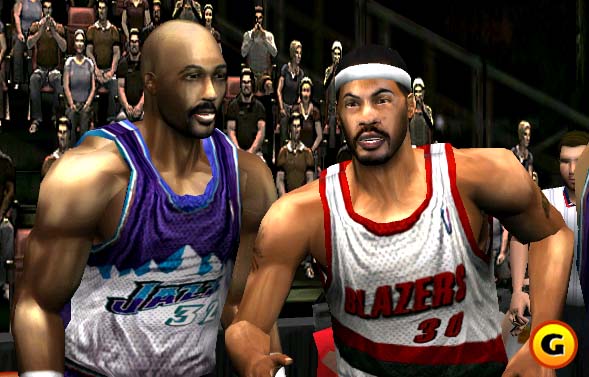 Count the polygons! And read the rest of the Malone/Grant story here!

That was a fun trip down memory lane. Now let's further cleanse the palate with a look to our future. Specifically January 31st, 2014 -- that's the Jazz game at home hosting the Golden State Warriors! Why is this date notable? Well, that's the day the Utah Jazz will put up a banner in the ESA for Jerry Sloan. (The only other coach with his banner up there is Frank Layden. Other non-player banners are for former owner Larry H. Miller, and play by play man Hot Rod Hundley) Let's let Jody Genessy of the Deseret News take it away:

Three years after Sloan stunned the basketball world with a midseason resignation in 2011, the team’s senior basketball adviser will be formally honored by the Jazz organization for his Hall of Fame coaching career in Utah.

The banner-raising ceremony will take place that night at ESA in an ESPN-televised game against the Golden State Warriors, multiple sources have confirmed to the Deseret News.

As one source put it, many fans believe the Jazz are "way overdue" in officially recognizing Sloan, who meant so much to the Utah community for decades.

The delay, however, has primarily been because the 71-year-old Sloan didn’t feel comfortable with being honored publicly.

You really should read the full article, so I will link to it again HERE.

I'm happy that Jerry is being recognize in some way. Remember back when the A/V crew working games weren't allowed to show his face on the jumbotron during home games? What was that all about . . .

So now our banner group will stand at 10: Frank Layden, Adrian Dantley, Pete Maravich, Larry H. Miller, John Stockton, Jeff Hornacek, Karl Malone, Darrell Griffith, Mark Eaton, Hot Rod Hundley, and Jerry Sloan. (Does he get the "1K" banner I wonder, for his over 1K wins with the team?)

Who is the next player or person to get their name up in the rafters? Mehmet Okur right? : )

This season has been filled with few ups, many downs -- but countless "moments" to enjoy. Last night's Alec Burks missed dunk that led to an open three in transition is one.

Not wanting to make Alec feel bad, 2010 Draft classmate Enes Kanter has been making the rounds this year on a much more higher stage. Where? None other than TNT's Inside the NBA "Shaqtin' A Fool" segment. There have been five episodes so far this season and Kanter has made two of them:

So if you can't laugh at yourself, who can you laugh at?

So some former Utah Jazz players are doing well.

Jokes aside, congrats to all of our former players. (I'm not currently recognizing the Brooklyn Nets Jazz players or Carlos Boozer)

Yesterday I asked which players were better, and it wasn't the best argument ever. I showed three players' stats, but did it in a forced comparison between player A and player B, and player A and player C. I didn't do a player B and player C, because in my mind these two guys aren't competing against one another. But still, poor format on my part. There was a healthy discussion in the comments section though, which is rare for an Amar numbers piece. As of this typing:

Well, some of the smarter fans guessed it one way or another (could have just looked at the permalink of that article) -- but Player A is Richard Jefferson, Player B is Jeremy Evans, and Player C is Alec Burks. Jefferson is starting at the three right now. His main calling cards are spacing the floor and defense. Alec Burks is off the bench and producing more while playing less minutes -- he can ALSO hit the three (check out his numbers for last year) but do more than just spot up. Jeremy Evans hasn't gotten a lot of time playing small forward over his career, but if anything he can play defense and slash. He can't hit the three, but he can hit the long two as he has demonstrated so far this season.

Player A (Jefferson) vs. Player B (Evans):

While I didn't indicate the ages of these players, or some of the minute data on offense in the original tables. I also didn't include things like how many more years the player is under contract for, or the size of the contracts. If you are making $11 million this year, like Rich is, you shouldn't be outplayed by two bench guys in per game averages.