The "Useless Minutes" Edition -- The Downbeat #956

Share All sharing options for: The "Useless Minutes" Edition -- The Downbeat #956

WE WON! WE WON A GAME ON FRIDAY!

Okay, maybe I should start from the beginning here, usually the Downbeats on Saturday have been kind of blah because it's always after a loss ('no no, dear Amar, that's not why they're blah.'). I actually tracked this out and the Jazz are actually 4-8 on Friday night's this season. 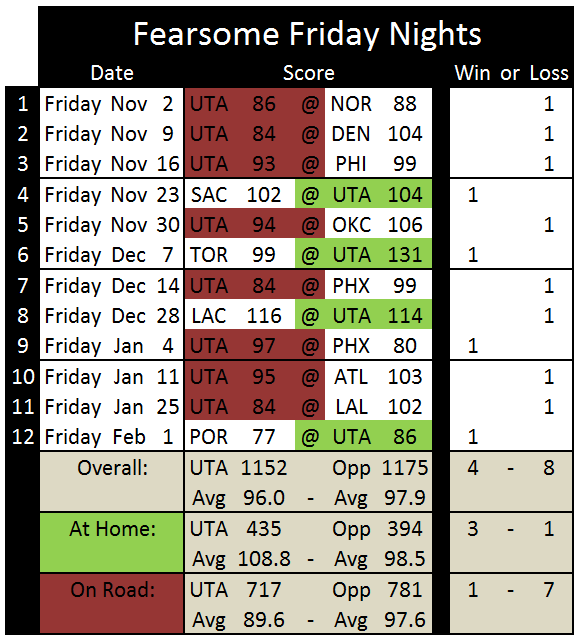 We're 3-1 at home, and really should have won that Clippers game as well . . . and it's clear that we play better there. On Friday night home games we're +10.3 in point differential. For the entire season we're -1.9 in point differential. And well, as good as we are at home, we're awful on the road, as we're 1-7 and losing be -8.0 points. The good news is that we only play 3 more Friday road games the rest of the season, and 4 at home.

So on a personal note, we should be getting at least one more Saturday Downbeat this year after a win.

I don't think the Utah Jazz have gotten enough acknowledgement for their handling of the Raja Bell situation. Yes, he fills up our 15 man roster and prevents us from signing a NBA D-League player to help us while so many players are injured right now. But, it also prevents us from signing a non-NBA level player to further take minutes away from the few guys on the team right now who are all either free agents or NBA novices. But the Raja situation isn't even about the ability to have other players on the team. It is about Raja. And the Jazz have made sure that for this season it isn't even brought up. That means they've handled it perfectly.

Raja gets all the money he signed for, and has full support from the team to be shopped around by his agent. Since no teams are calling, there's been no need to work out a buy out.

The Jazz also get what they want by not having Raja around. He's not a distraction. The media isn't constantly asking Kevin O'Connor or Tyrone Corbin about Raja Bell in every interview. He's also not demanding playing time in order to showcase his talents because he's also an unrestricted free agent at the end of this season.

I think we love flexibility (and we don't have that with a full roster). But more than that, we love not having drama. We're not the New York Knicks or Los Angeles Lakers. Sure, drama brings more pageviews -- but as a Jazz blogger that's not what I want either. I'm first and foremost a Jazz fan, and the needs of the team and success of the team are always above the petty needs of a guy who writes about the team. (Unless you are into manufacturing stories in order to have something to write about)

Raja is out of sight out of mind this season, which is all we can ask for. If a team wanted him he'd be out of our hair fully; but the fact that no team wants him is just a testament to how insane it was that we played him 3,000 minutes over the last two seasons. (Okay, 2,893 -- but still!)

That brings me to the next point. I think with a team that is filled to the brim with players who deserve to play you're always going to get into arguments about minutes. Be it from coaches with one another, to fans with one another. The justification for giving the younger players the short end of the stick when compared to their peers (who ARE getting minutes early in their careers and turning into good players sooner, being a quicker return on the investment of drafting a lotto pick) is that "oh well, our players get MEANINGFUL minutes." That's cool. I think that minutes during a close game that we need to win is better than minutes at the end of a game you're being blown out in for sure.

But I'm a rational empiricist, sir. And nothing exists without a frame of reference. If there are things like Meaningful Minutes, where a young player gets 5 minutes in a close game that we need to win, well, then there must also be something like Useless Minutes. The idea is that Useless minutes are minutes used on a young player in a non-competitive situation. I disagree because all minutes are useful to a younger player. I'll get into it with pie charts a bit later. I suggest that Useless minutes are minutes spent on a veteran who a) doesn't help you win, and b) has little to gain from playing those minutes. He's not getting better, and the team isn't getting better playing him.

Playing Raja Bell 3,000 minutes over the preview two seasons is Useless Minutes. Why? Because he's played a career 19,800 minutes (19,813). That 2,893 is less than 15% of his career. But 2,893 minutes to a rookie/soph/3rd year player? Derrick Favors has ONLY played 3,827 total minutes in his career. And that Raja Sum of Useless minutes means a lot more to a younger player. The Raja Sum is 76% of Derrick's entire career. While these guys did not directly compete against one another for minutes, the point is valid.

The minutes go farther for a young guy who has the chance to get better, than when on a guy who doesn't help your team, and can't get better.

Of course, the point here is that not every young guy can get better, and not every veteran can't. Furthermore, Useless Minutes only apply to those players who aren't helping your team win. So this tag does not apply to Al Jefferson, Paul Millsap, or Randy Foye. The case for Raja being the poster child for Useless minutes (or Josh Howard) can be made. Imagine how much better, confident, consistent, and decisive Gordon Hayward would be right now if he had +1,000 extra minutes of experience under his belt?

What do you guys think about Useless Minutes? Is this a real thing?

Playoffs and all, Tyrone Corbin has coached 145 total games. He has won 70 regular season games, lost 71 regular season games, and if we are just looking at the regular season tonight he can tie it up. He's 0-4 in the playoffs; but not even General Patton could have had us beating the San Antonio Spurs last year. I'm probably in the minority here, but I don't think that Corbin is horrible. He does some things vastly different than I would, and he seems to be holding onto his anecdotal experience in greater regard than the entire history of head coaches before him. That said, I think he has the potential to be an okay coach. I've spend hours looking at NBA head coaches over the last month. Former players, who were players in the 80s and 90s, don't have as short a leash as players who turn into coaches from earlier time periods. (Especially non-White coaches) Is this a systematic thing or just the way it is? I don't know. But I do know that for the head coaches who start off without a huge star (like Mike Brown did with LeBron James) it's a hard road. The coaches who do stick around (Maurice Cheeks, up until a few weeks ago, Alvin Gentry) have done so because of a few things:

The first is that while they are new, they are pretty average. They don't have a serious Achilles heel. The second thing is that they at least tread water, if not win.

Ty, for his own future career, has to win now. I'll get into this later, but even for THIS job with the Jazz he has to win. And he's doing that / treading water right now. If Corbin can continue to improve during the second half of this season I think he can become that buoyant young coach who does not hurt his team. Those coaches get more and more chances to stick with a team. Of course, that means he has to continue improving. For me a huge part of that will be to move away from having an Achilles heel, and we all kind of have an idea of what that could be for him.

Corbin has a chance to stick with the Jazz as a head coach, but he's not going to sleepwalk into that job security. The Mike Brown (LeBron), Doc Rivers (Tracy McGrady and Grant Hill) approach to head coaching success isn't open to him. He has to find his way among the path of the other young coaches who took a longer climb to being a good coach, and that's based upon results based evidence. If we win tonight (road win on 2nd night of a back to back with lots of players injured), coaching could be a reason for that.

(And for the record, at this point I am in the "Don't Fire Ty" boat, and also the "Our wins and losses are not a product of Ty" boat. He's a young, forgettable coach right now who could be good in the future. He's what Carlos Arroyo was when we got him. He could be good. He could be the PG of the future. Or he could suck. We don't have enough data. Ultimately Arroyo was just a stepping stone to Deron Williams.)

I keep forgetting to put this video up here . . . and people keep tweeting it to me (too many to name). So, yeah. It's a Derrick Favors true* story from high school from someone who went to HS with him. There are a *lot* of mature words (N words, swears, etc -- urban slang).

It's funny. Frantic. Good editing. This guy has all the personality and emotion that Favors doesn't show.