The Alternate Theories Edition - The Downbeat - #991

You weekly dose of nonsense from me.

Share All sharing options for: The Alternate Theories Edition - The Downbeat - #991

ICYMI, an interesting theory on why things have gone south for the Jazz post-trade deadline was posted by flibbidy in the comments of Diana's DB yesterday:

I think the lack of a trade may have hurt the team, and not just from a personnel perspective. For Al and Paul, they have been the subject of many rumors and a trade would have been the end. For whichever one got traded, it would mean he at least knows he’s moving on and gets a chance to fully test the free agent market. For the other, it would have meant he’s more likely to stay and get a new contract with the team. Instead, there were no trades. You could argue there are some merits to this, but from the point of view of Al/Paul, they are still in a state of flux. They don’t know if they’ll be back and management hasn’t given any specific vote of confidence or reassurance. The future becomes uncertain. It’s hard to get motivated for a team that you aren’t sure even wants to keep you around. This filters through the rest of the team, who also knows the future is uncertain, especially with a few other contracts due to expire this summer. It’s a mess.

Our resident CBA guru, Peter J. Novak, brings the numbers to the argument:

Al and Paul as free agents can get 5 years with the Jazz and 7.5% in new contracts. If they just sign straight up with another team they can only get 4 years and 4.5% raises. If the Jazz work a sign and trade in the summer they are STILL limited to 4 years and 4.5% raises. However, if the Jazz had traded either player by the deadline (or earlier) to a team that wanted to acquire them and re-sign them this summer then the new team would have their bird rights and ability to re-sign either for 5 years and 7.5% raises. So since the Jazz are unlikely to retain both Al and Paul, or at least unlikely to retain them at anything but a discounted rate, the lack of a move could have potentially removed a 5th year from each of their contracts. That 5th year comes when they are 32-33 years old and their skills may have declined significantly. In each of their minds the Jazz already may have inhibited their potential earning power this summer.

I thought this was pretty interesting, as it's a perspective that I haven't thought of and haven't heard fans discussing. Most fans probably see the expiration of the trade deadline as an opportunity to re-focus on the task at hand (winning games, making the Playoffs) now that players no longer have to worry about where they might end up when the opposite may be happening or has the potential to wreak havoc on the rest of the season.

I could be reading between the lines where there is nothing between the lines, but from Gordon Hayward's last few post-games, it seems he is deeply frustrated beyond just the losses. Granted, he may be experiencing the worst losing streak of his life, but the frustration seems to go beyond that. Gordon Hayward's dad, @GScottHayward, rarely tweets anything beyond links to articles and interviews with Little Gordon. His most recent tweets have therefore been pretty interesting: 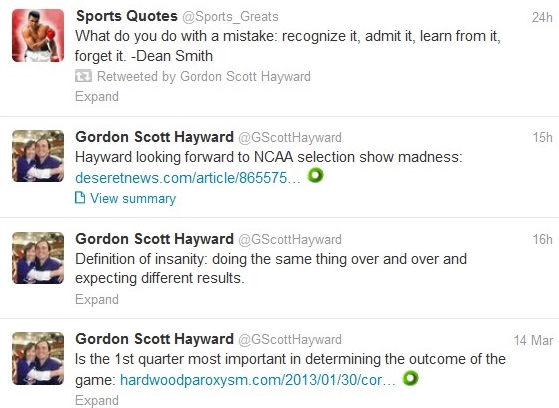 Do you think the "insanity" tweet is in reference to the Jazz? Also, will the Jazz now shut down Gordon's dad's account? Only time will tell. 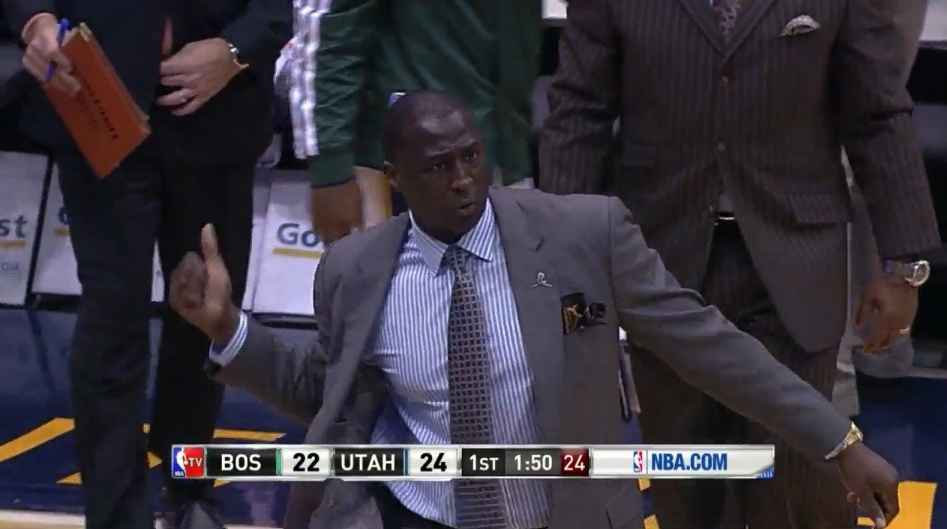 The three fans that attended the game with Greg Miller have all written posts about their experience. All three are good reads, but here are what I personally found to be the most interesting parts in each one: PunkAsh:

Greg Miller on decision-making: He’s only brought in on decisions when they’re ‘imminent.’ "If I get involved in the decision making, then I can’t hold Lindsey or Corbin accountable for what happens. They could just throw up their hands and say they were doing what I said to do. But now, since I’ve stayed out of it, I can hold them fully accountable."

The other thing about the game that stood out was just how much talking goes on. Not just between players, but also between referees and players. In fact, I was quite surprised at the attitude of… I wanna say slight arrogance that seemed to be about the referees. Tony Brothers was the lead official on this night and he seemed to have a short fuse when it came to the talk. If it wasn’t Greg Monroe it was Mo Williams, or someone else. In fact one particular moment late in the game featured a stop in play. A foul had been called and the ball was being reset on the sideline. Mo Williams stopped and headed to the scorers table to wipe his feet off. Tony Brothers sharply asked “Where are you going? Get back on the court!” To which the reply from a defensive Mo Williams came, “I’m wiping my feet off, hold on a minute!” And Brothers responded, “I don’t care, get back on the court!” Later, Brothers even got into it with a fan warning that he would have them thrown out if they continued their banter with him.

Speaking of the refs, another thing that stood out to me was how they treated the players. We had the luxury of watching Tony Brothers, 36 David Jones and Haywoode Workman officiate the game. Jones and Workman were pretty good, but Brothers was in a bad mood. He must have woke up on the wrong side of the bed or something, it was pretty funny. Two minutes into the game Brandon Knight was called for a foul that Greg Monroe didn’t agree with. He walked over to Brothers and argued the call a bit, Brothers didn’t want anything to do with him, told him to get out of his face (to be fair to Monroe, he wasn’t overboard on his argument) and proceeded to go tell the stats desk the call. When he walked back to the line, Monroe attempted to argue again when Brothers screamed at him “Don’t talk. Don’t talk to me again!” Monroe responded with, “I can’t even talk?” and Brothers fired back “No! Don’t talk to me about it again or I’ll ‘T-2 your ass’”. and Hornacek had a little laughter to him as well, but he was more of the Jerry Sloan coaching type. He was having a good time, but remained serious. I couldn’t help but notice how he had a connection with the younger guys. Everytime Enes Kanter or Derrick Favors would come off the floor, Jeff was right there giving them little tips. I never really paid any attention to the interaction between the assistants and the players, so that was cool to see up close.