Share All sharing options for: The "Happy St. Patrick's Day" Edition -- The Downbeat #992

Happy Paddy's day, everyone! Sorry everything is so late! Things are crazy here! We have three wins after the All-Star break. We've played 11 games. 3 / 11 isn't so hot. There are only 10 home games left this season, and we suck on the road. We have a few games at the end of the season hosting the Portland Trail Blazers, New Orleans Hornets, and Minnesota Timberwolves all in April -- hopefully those are wins. The other 7 home games could be really hard, or very very really hard depending on who we face, and the deal with the schedule. Games at home against Philly or Phoenix shouldn't be back breakers -- but where they are placed in March . . . it's not going to be fun.

It's going to be a fun ride. We need these home games. Starting with tonight hosting the Memphis Grizzlies. March looks rough, yes, but there's also March Madness to be happy about! Sign up for our contest!

I've always contended that Felton Spencer missed his calling as an actor playing "only-Genie" roles. Btw, we love the playoffs. We love our "pumped in crowd noise" home advantage. We may not have either this season. So . . . let's go back to the good old days.

So last night Kobe Bryant played in a game after tweeting to the whole world about how injured he was over the last 48 hours. The Los Angeles Lakers won the game, but Kobe only played 12:00 minutes, and finished with zero points on four shots. Nice job, tough guy. All NBA players get injured during the season, and it's not a new thing to pop up in this era of basketball. People used to play through injuries back in the day all the time -- they just didn't have social media to help them talk about how great they are. Kobe isn't even the first modern era player to be deified for playing basketball with a few scrapes. Allen Iverson, back when he was a Sixer guard, used to be lauded for doing stuff that people in the 80s, and every era before then, did without getting any media attention for it.

Back in the day the game was really all the players had. And they had shorter careers. And the contracts were also for fewer years, and a fraction of what players today make. NBA players (all professional athletes back then) used to play hurt because they had to -- a lot of professional athletes had to have second jobs during the off-season, and a few during the season. Hall of Fame players in the NFL, MLB, NHL, and NBA used to do shift work, or work as manual laborers -- and then go out there and play a full game.

No helmet-era NHL legend Maurice Richard quit school to work as a machinist from the age of 16, and played junior and pro hockey with 'never-healed-properly' ankle, femur, and wrist fractures. He continued to work as a machinist DURING his playing career, in addition to taking on odd-jobs to make ends meet (1 min video there). Lots of NBA fans don't really know NHL history, but "Rocket" Richard was a star and go-to guy who used to get beat on a lot by the other team -- teams were more physical with him in an attempt to throw him off his game. (Sorry, no FTA in Hockey though) I wonder what he would have tweeted out, if he had the opportunity.

Stockton even played in the playoffs hurt a multitude of times -- but went so far as to not even have the team release that information because he did not want a Jazz failure to have the excuse of him being hurt. He wanted to play to win. Not play to increase the size of his tall tale. The last few years we ONLY hear about Kobe playing hurt, and even his coaches using that as a reason for playoff failure. We have evidence of this for John as he played in the Western Conference Finals and QB'd the Jazz to a 7 game series (final game margin of loss -4 points) to the Seattle Supersonics when Gary Payton was at his ultimate beastmode. That season The Glove averaged 19.3 ppg, 7.5 apg, 4.2 rpg, and 2.9 spg. Against a broken down Stockton he scored a little more, 20.7 ppg, but only got 6.0 apg, 5.1 rpg, and 1.6 spg. On the other side of the ball, a Stockton who shouldn't even have been playing managed 9.9 ppg, 7.6 apg, 2.9 rpg, and 1.7 spg against Beastmode Payton at his peak.

And John was still the boss on the floor, and we got to Game 7 on the road, and were 5 points away from the NBA Finals. On, effectively, a broken down leg. And while John was killed by the media for his bad player -- we only learned till AFTER the NBA season that Stockton was playing hurt. He didn't tweet about it minutes after it happened and kept tweeting about it so no one forget.

Stockton's example isn't the only one in NBA history. One season Karl Malone played the last 3 months of the season on a broken ankle, if I remember correctly. Others have endured much worse.

But none have endured it as publicly as Kobe Bryant aka 92% Iron man.

So, we all know everything there is to know about Adrian Dantley right? He was a big time scorer at Notre Dame back in college and finished with career NCAA numbers of 25.8 ppg, 9.8 rpg, while shooting 56.2 fg% in over 2942 undergraduate minutes? He won NBA Rookie of the year for the Buffalo Braves back in '77, and continued to score, and score, and score. Even here at the site we recently went over where he ranks in terms of Jazz offensive threats. Well, the multiple time All-Star and All-NBA player would eventually have his jersey hung up in our arena, and he'd be selected to the Hall of Fame. He went on to be an assistant coach with the Denver Nuggets for eight seasons and was pushed into head coaching duties against his old club in the 2010 playoffs. (George Karl had serious health issues back then) That was a while ago, though, so what's AD up to now?

Dave McKenna, of Deadspin, found that out. And everyone who hasn't yet, needs to read his article "Why is one of the NBA's All-Time Greatest Scorers working as a crossing guard now?" (A lot of people emailed, txted, or tweeted this post to me -- so thanks!)

"He was bounced out of Utah after the 1985-1986 season following an awful negotiation with Jazz brass. It would take Dantley three years of crossing guarding just to earn enough to pay the fines he got while holding out ($44,000) for that last Jazz contract, a three-year, $2.85-million contract that was big for its day. Just before trading Dantley to the Pistons for Kelly Tripucka, Jazz head coach and general manager Frank Layden pulled one of the all-time management dick moves in pro sports history by fining Dantley $3 and making him pay it off in dimes--a figurative "30 pieces of silver" for an alleged betrayal, like Judas before the Last Supper."

The piece discusses and reviews his NBA career, his personality, and his history of being -- well -- an interesting character. Some found him hard to get along with, others found him selfish and stingy. And now he's working as a crossing guard. For reals. 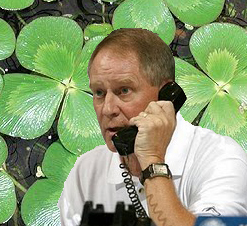