The Downbeat #980 -- The "Teamwork, pace of play, point guards, and what questions math can't answer" Edition.

Share All sharing options for: The Downbeat #980 -- The "Teamwork, pace of play, point guards, and what questions math can't answer" Edition.

Last night the Utah Jazz did a great job of taking care of business at home by dumping the Charlotte Bobcats 98-68. They did so in a feel-good way that stopped our three game losing streak. Adding to the difficulty level they did it without Mo Williams, Al Jefferson, and Paul Millsap. Mirroring the team we follow, SLC Dunk did a great job of taking care of business last night in a feel-good way without my direct input. There are similarities to be made to the strong, confident performances by Enes Kanter, Gordon Hayward, and company -- our Jazz players, with the great job last night by Andy Larsen, Peter Novak, Yucca, Diana, and The Shums. Last night we found out that there very well could be life in Jazz-land without any of those three vets. And last night we also re-confirmed what we already knew, SLC Dunk is in great hands and we like to pull together and gut out great content for you fans : )

Check out the game recap here, and the post game video here!

Last night was a pretty good night for two of our second year players: Kanter and guard Alec Burks. They led the team in +/-, whatever that is, and had some things they did right show up on the boxscore. That's fine. However, I think the bigger impact we saw out of them was on defense. Kanter was an absolute beast who could not be moved. And he finished the game with 36.8% of all of the available defensive rebounds when he was on the floor. Just so we understand ratios, there are 10 guys on the floor, meaning that he should have only about a 10% probability to get the defensive rebound (looking beyond things like size, position, and who is on defense). He was doing the rebounding of four guys last night (rounding up). Burks didn't have a great offensive game, but he seemed more upset if he made a bad pass or got beat on defense. For much of the night he was matched against the Kemba Walker / Ramon Sessions / Ben Gordon types of the Bobcats. We have been missing guys who are young and play defense. Both of these guys have significant holes to their games that are partly due to youth -- but one of the things they seem to HAVE is that they are interested in stopping their man as well. (That's a testament to the Jazz scouting, interview, and draft process I presume; so they get full marks there, Jazz braintrust!)

As an aside, looking at what Kanter and Burks did against their 2011 Draft Class peers Kemba Walker and Bismack Biyombo is a fun experiment. Burks didn't shoot well, and didn't get the foul calls, but Kemba shot worse and made zero threes. Kemba is a natural PG and had way more assists, but Burks obliterated him on the glass and in scoring efficiency. Biyombo finished the game with 1 points and 1 rebound. We all know that Kanter finished with 23 points and 22 rebounds. Enough said, right?

One guy that I had pegged Kanter to be like was former one-time All-Star Jeff Ruland. Ruland played in the bad medicine days and while he finished his career as a guy who averaged 17/10 he did not play for very long. His body wore out, or he had some injuries. I honestly think it was a little of both. Ruland was effective but did not dominate. I felt like that was who Kanter could be in the NBA. (Ruland ALSO had a 20/20 game, btw) Maybe I was wrong, and I need to re-evaluate what Kanter can really be in this league?

Has your opinion of him changed as well? He hustles, runs the floor, and has a back to the basket game -- and he can't even drink alcohol yet. Dwight Howard has less post moves than he does, and he's the best big in the league (by reputation -- we know it's actually Al Horford).

At least for now we can enjoy this:

Andy is at the Sloan Sports Analytics Conference right now on his own dime. (SB Nation wouldn't even give me $20 a day to give him for travel and food! Boo!) He's not the only SB Nation blogger there or the only Utah Jazz related blogger there either. He's been diligently live-tweeting the events he attends and it's all really fascinating. He wrote a post on the first day's events here -- which you should have already read by now. I mean it. There will be a test. So if you aren't reading his posts at least give him a twitter follow @AndyLarsen .

I think there is a great benefit to looking at data. I guess I attempt to be a rational empiricist and I feel like a quantitative way of establishing frames of reference help us better understand the situations that we encounter. That said, numbers don't solve everything; or even begin to describe everything. And ultimately, numbers don't answer everything either. Kevin Pelton (you already know who he is) wrote something for E$PN Insider that examines 10 such instances. Here's a little snippit of some of the things he talks about in the full article -- which you can totally read in full over here. 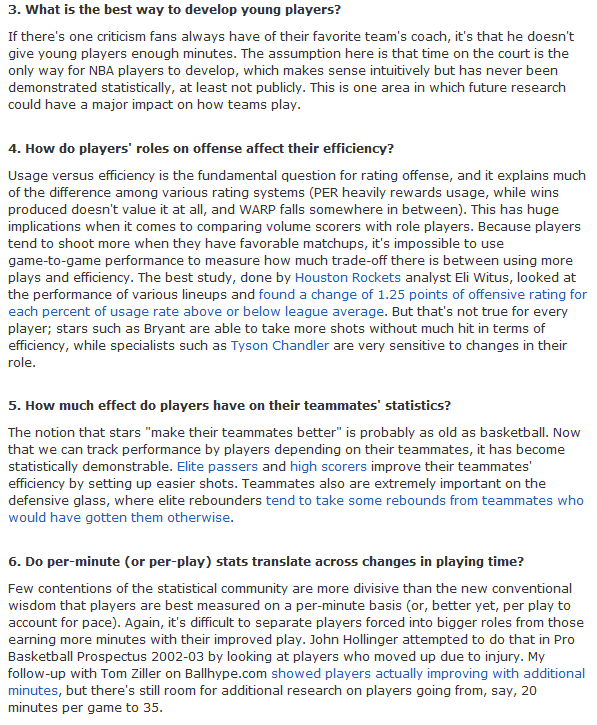 I think we could do a whole post on each of these points (and really, on each of the 10 he presented). Of course, my non-analytical answer to each of them may or may not surprise you.

Or at least, those are my immediate points on it. If data does become better for these points maybe I will have to re-evaluate my opinions. What are yours?

The "Core Four" is a hot button topic. Some people act like any success they have makes them say "I'm meeeellltinnngg . . . I'mmm meeeltinggg!". While others are a non-stop parade of unicorns and rainbows no matter what they do. I guess I tend closer towards the unicorns and rainbows side of support for them than the other. And why not? I think the Jazz draft really well in the lottery and in the second round. They scout well. And I support who they pick. That said, four guys a team doesn't make. Some are advocating for DeMarre to be that 5th guy. I like his game, but I don't quite think that he is a headliner that you build your team around. He should be starting on THIS team, but let's not confuse his success with the idea that he can one day be an All-Star. Chances are maybe only 2 or fewer of our C4 will be All-Stars. On topic, though, you need more to be a good team than four guys.

So if you look at our ORTG last night (112.5) vs their season DRTG (111.1) we come out a little ahead. We hurt them more than they usually get hurt. What about the opposite side? The Bobcats ORTG (100.8) compared to our DRTG last night (78.1)? The difference there is huge, it's -22.7 points per 100 possessions. And WHY did that happen? It happened because of defense that turned into fast breaks and quick strikes.

Love the C4 or hate them, gotta respect that. 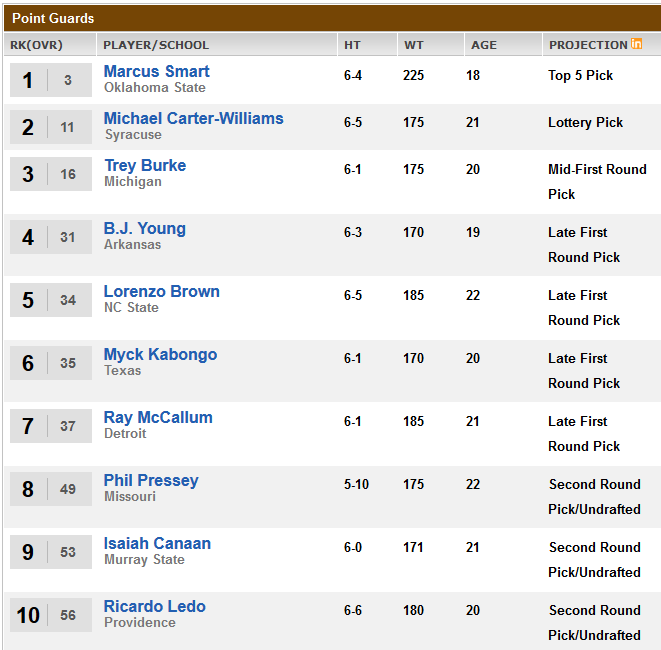 We all know how I feel about Myck Kabongo -- but unless you guys have any other suggestions, these are the 10 I'll be tracking all March long, and up till June.