The Larry H. Miller Would Sell the Team First Edition - The Downbeat - #997

Share All sharing options for: The Larry H. Miller Would Sell the Team First Edition - The Downbeat - #997

Saw a link to this on Twitter: There is now a petition out there to replace Tyrone Corbin and Sidney Lowe.

Thanks to Chisel McSue for the link to this SI article from 1997. Granted we had two Hall of Fame players on the floor, a Hall of Fame coach on the sidelines, and LHM in the front office, but this article provides a stark contrast from what we're seeing now (a team in flux) to a team with a vision and that had successfully executed a plan to achieve that vision. There are several funny lines and anecdotes in the article as well (that also show how times have changed). My favorite parts:

You will find no Armani suits or Gucci loafers in the Utah locker room, only jeans, T-shirts and sweat suits. "We have a dress code here," Malone says with a laugh. "If your slacks are too nice, it's a $25 fine."

Malone acknowledges that Utah's run of success will be in danger within a few years. "I think after John and I, and Hornacek and Big Dog [Carr] leave, they're going to have a hard time getting players to come here," he says. "I like to tease our owner by pointing to some of these young guys with shorts down to their ankles and 12 tattoos and telling him, 'You're going to be paying someone like that $100 million someday.' Larry just shakes his head and says, 'I'll sell the team first.' When we go, it's going to be the end of an era." 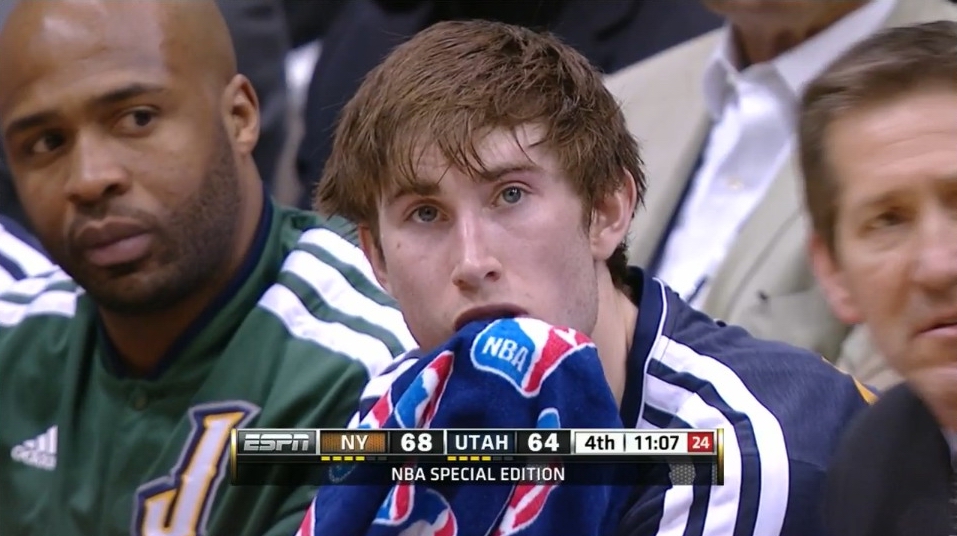 This video is a lot of things: sad, hopeful, and maybe even inspiring.

Healing Agent, an original series, puts the lens on fallen pros as Marotta guides them through rehab, whether for gambling addiction, depression or obesity. In the premiere, Marotta unveils the plight of Luther Wright, a former Seton Hall sensation and NBA Utah Jazz star, who, at 507 lbs, has beaten crack but cannot break his food addiction despite the fact his sister died of morbid obesity.

Luther also talks honestly about being molested as a child, getting clean, his sister's death, panhandling and living out of a garbage bag. (Maybe I'm just not seeing it, but I can't seem to find a way to embed the video. There's two parts; there's a link to the second part in the link above.)

The Jazz are 20-12 this season when Jamaal Tinsley starts, 1-3 when Earl Watson starts, and 13-20 when Mo Williams starts. Granted these numbers 1) don't necessarily indicate much since a lot of times Jamaal and Earl played minimally in the second half; 2) this is just a numbers game. Nevertheless, which point guard do you most want running the team right now of these three choices (and these three choices only):