The Downbeat #998 - The "Positivity" Edition

Share All sharing options for: The Downbeat #998 - The "Positivity" Edition

It hasn't been fun, with 10 of the 16 games being road games (many in a back to back set); and all of our wins have been against lotto teams. HOWEVER, if you chart out the winning percentage over the course of the season it appears to be saw-toothing upwards. 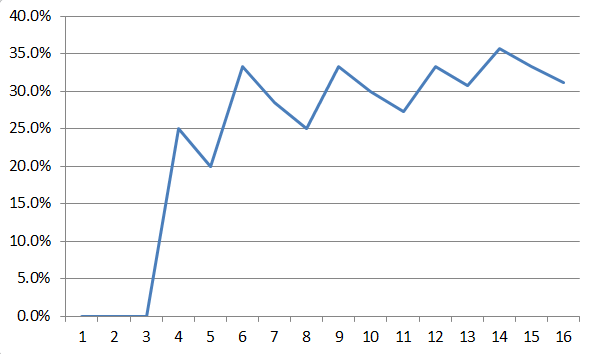 So, there you have it. If you look at enough data you may find something to smile about.

Losing is never fun, but I think we're continuing to see some good things out there. If anything last night we saw that Alec Burks can play under control, and let the game come to him -- and do it against starters on the best team in the Western Conference. He had to play defense against Tony Parker and the Spurs seemingly endless screens. And he was still scoring buckets in the 4th quarter as well. The initial assessment that Burks could have star potential may have been obscured by how little we actually saw of him last year; but I think we are seeing evidence that he can be a solid player off the bench right now.

A huge part of this is the fact that he has worked on his game DURING the season. He's not the same guy he was from the end of last season, or the end of the summer league, or the beginning of this season. His shot looks natural, fluid, and quick -- and it's going in. He can pile up turn overs now, but more than anything else he's involved in the plays while not trying to drive and shoot it every time down the court. He's maturing into a real NBA player. At times this season there were serious worries if he could do that.

So that's a positive note for sure. Especially when you factor in that he's doing these things out of position as a point guard.

Wow, can you believe it? There are only 13 more games left this regular season for our beloved Jazz! Where did this season go? I don't really know. Where is this season going? I *kinda* know, but I'm not quite ready to accept that fate yet. These losses are piling up, and what is even more absurd than an OT loss to the Spurs on their homecourt is that the Lakers lost last night, at home, to the Wizards. It would have been a nice night to pick a full game on them; but it was not meant to be.

We're 1.5 games behind them, and they have one fewer loss than us. Los Angeles was getting really hot, but I'm glad the Wizards cast a spell on them, even with the return of Kobe Bryant and Pau Gasol. There are ONLY 13 games left for the Jazz, and 12 left for the Lakers. But at the same time -- there's STILL 13 and 12 games left for our two clubs. You have to play the games still, you can't really assume wins and losses just yet. (Teams haven't gone into super duper tank mode yet) The Rockets, Lakers, and Jazz will be fighting one another the entire way from now on. And while it looks bad for us, that's no reason to give up.

I guess that's the silver lining / positivity there.

Landon Hemsley (@EarlOfHemsley) of the Deseret News did an awesome story about the 2013 Chappy Awards. Dustin Chapman (@ItsChappy) is someone some of us follow on twitter already; and he does an awesome job of trying to reward some of his tweeps with this type of yearly award, the Chappys. You should check out the article Landon did here; or skip ahead to the full list of winners here.

For the record, we were selected by Dustin as the best Utah Jazz blog this year. So yes, positivity! 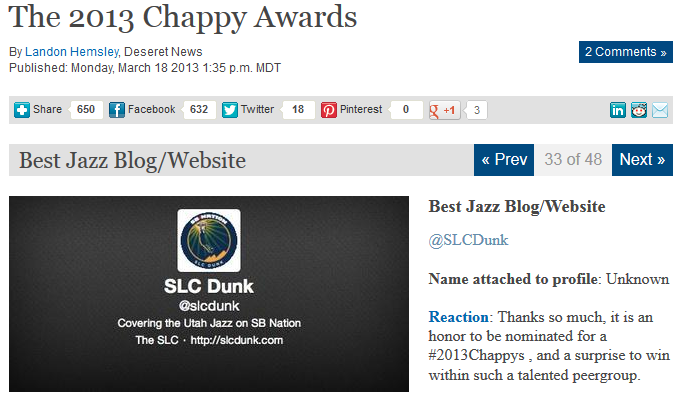 I think there are a ton of great Jazz blogs out there, so it was an honor and humbling to win. I tried to express that in my reaction tweet (above).

Last season, on April 8th, the Jazz lost to the Spurs 114-104 in their gym. We were blitzed in the first quarter 31-19, and spent the entire game fighting an uphill battle. Utah was down by 17 at half. Nearly a whole year later, the Jazz lost on March 22rd to the Spurs, yes same outcome, but we lost 104-97 in their gym. Last night we lead after the first quarter and at half. We struggled down the stretch, but managed to take the best team in our conference to overtime in their gym. We're a bad road team. We had been struggling of late. We're bad against quick point guards. And the Spurs have a significant talent, experience, and mental edge against us.

Yet we fought all game long, and the last positive point for this downbeat is to look at how far we've come, against the highest of measuring sticks for our young club -- the Spurs. Our overall record right now is 34-35. We've had a number of injuries all season long. We haven't had a consistent effort from some players all season long. And we've had a lot to complain about all season long. But at the end of the day you have to recognize that we're not the same team we were last year.

We're a team on the rise, even if we miss the playoffs this year.