The Downbeat #984 - The "puking rainbows and potty mouths" Edition

Share All sharing options for: The Downbeat #984 - The "puking rainbows and potty mouths" Edition

Okay, the Jazz have now lost 7 of their last 11 games. We're in a downturn right now and it's having a negative affect upon the fans. What we don't know, and really, is what affect if any it has upon our players. No one ever wants to lose, especially not if it helps the Los Angeles Lakers. And I believe that our players are trying to use their talents as best to ensure success each and every game. There are positive things to be found, so let's go over some of them.

The biggest one for me has been the return of Mo Williams. In his first game back since before Christmas (really, Dec 22nd was his last Jazz game) he made immediate returns. Most people are going to be upset at his quick three point attempt to finish the game. What a lot of people are going to forget is that at that time in the game he was shooting 67 3pt%, was playing back in an arena that he has confidence in, and still finished the game with 8 points, 6 assists, 3 rebounds, and 1 block. He was a bit rusty, and didn't make that last shot (but taking those shots is who he is, we saw it against the Boston Celtics and San Antonio Spurs twice this year). He puts much more pressure on the defense when he has the ball in his hands than Jamaal Tinsley or Earl Watson does.

Jamaal has scored 13 points and dished out 21 assists in his last 5 games. Earl Watson's last five games have him scoring 2 points and dishing out 13 assists. Randy has gone for 37 points and 6 assists in the same period. Marvin has been worse, only 24 points and 6 assists in the last five, and in one of the games he scored 15 points. I don't care if we have a healthy Al Jefferson and Paul Millsap starting, or giving the keys to Derrick Favors and Enes Kanter right now -- we're not winning games if the rest of our starters are so useless. 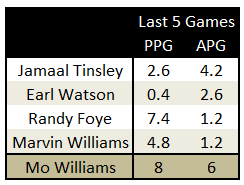 Mo Williams immediately makes an impact -- and it's not just taking ill advised shots and scoring. What made a huge difference last night was Mo picking up the pace when on the floor with some of our younger guys. He was directing things, and trying to get easy points. Our other two PGs are less opportunistic. We used to lament Mo's fast break pass attempts -- but it's better than Randy Foye who avoids passing and instead goes for a contested layup. He did that twice last night. Let's say instead Randy passes both times, and we only make one of those fastbreak attempts, then it's a completely different game.

I'm not happy that we lost last night, but having Mo back is a huge deal. He helps our younger guys, and he plays much better than the guys behind him on the depth chart. #TeamMO And yeah, if it was me, I would have finished last night with a Mo Williams / Alec Burks lineup. (Which is what Karl Malone advocated for back in preseason -- which is probably why our team avoids it.)

Last night we went on an 11-1 run to set up our largest lead of the game with these lineups (these three guys + Enes Kanter, and plus one of Derrick Favors or Marvin Williams). And we did it against an opposing lineup that still had two of the Cavs best players out on the floor (Kyrie Irving and Alonzo Gee). It's a successful change of pace lineup that we can use to wreck bench units with. I hope to see more of it, even when Al Jefferson returns.

Okay, the schedule looks rough -- and we dropped 2 of the 'winable' games on this road trip. However, this is a team that is capable of surprising us still. How many times have we come together to win a game we shouldn't have? Probably about the same amount of times we've lost a game we should have, I guess. This roadtrip may ultimately be under .500; however, that doesn't mean March is a complete loss.

I only need to look back to how the Jazz played LAST March for evidence that our team is capable of surprising us. Or even last April where we were still losing to the New Orleans Hornets -- but still made the playoffs. We only have 20 or so games left this season. And even FEWER are home games.

Let's cheer for the team that we love, and not confirm their doom before it actually happens.

Okay, we're losing -- but if you're more interested in how good the Utah Jazz are going to be in the long run (and not immediately living and dying by just one singular season within the continuum of Jazz basketball) you have to love how:

It's not like "oh, they're killing it, but playing only 4 minutes a game". They are playing great and playing well, and playing together. It's Jazz basketball. Their defense isn't shutdown just yet, but it's miles ahead of some other guys on our team. Their offense stalls at times, but give them more chances. How many of us learned to ride a bike without falling? Very few.

Just look at this! 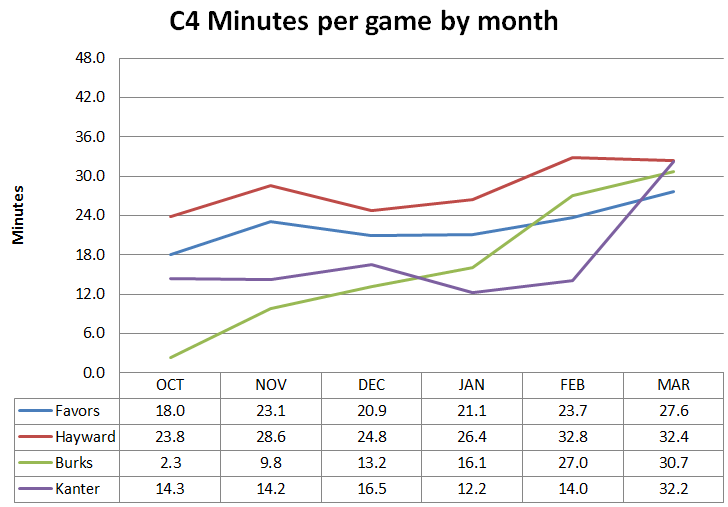 I know! Sample size is small, but look at the singularity!

I think we do tend to be more vocal about the flaws we see in our team, and additionally, we're quick to ascribe blame. It's the nature of being a fan. However, being a fan is more than just about being mean, or hostile, or upset. The reason WHY we are fans is because we inherently support and LIKE something. And the reason why these blogs exist is so that we can find other people who love the same things we love. We all love the Utah Jazz here. And while the last few weeks have seen less than awesome on-court performance by members of our Jazz family . . . I think this blog has seen some less than awesome on-blog performance by members of our Jazz family too. This is the last time I'm going to say this . . . but guys . . . we can talk about our team without swearing. I know we get upset, but we're smart basketball fans. Let's at least try to explain our feelings without using a four letter word.

Instead, and this is going to be a new rule -- if you are going to swear, type out the word you want to say -- then delete it and replace it with a funny sounding NBA player's name before hitting "post". Be more creative with how you are upset. But let's keep this a family site. Let's better reflect the safe and welcoming environment that the franchise we follow wishes to express.

And yes, shut up. Let's clean up this site, I've sworn here before. I vow not to do it again. This is not a censorship issue, this is a safety issue for young fans (not all people who visit this site are in their 20s or older). And this is a creativity issue. We're Jazz fans. We're smarter. We've been raised on better basketball. And we're better than what other people think of us. Let's get creative and positive with our criticism and less with the potty mouth.