Pretty much every Jazz fan has an opinion on all of these topics . . . either we love a group, or hate a group. Let's meet in the middle here.

Share All sharing options for: The Downbeat #986 - The "Love and/or Hate" Edition

Another heartbreaker, huh? That's three come from ahead losses in a row on this road trip. And now 8 losses in the last 12. Of course, the first thing to mention is that we were pretty injured for a while there (but at full strength last night). The other thing is that we're not a very good road team -- in our last 20 games we have 11 losses, 7 of those losses have been on the road; and furthermore, in the 8 road games we've played in the last 20 total games . . . 7 have been losses.

So in the last 3 games we've used 10 different players to finish the game. Tyrone Corbin is using mixed lineups of vets and youth, starters and bench, and not making automatic substitutions by letting guys who are playing well play for longer. These were the criticisms we've had of him earlier this season, but right now (either out of some sort of lightbulb moment, being visited at night by three Christmas ghosts, or sheer desperation due to injuries) he is mixing it up.

While we have not won many games lately, for Corbin necessity has been the mother of invention. Personally I think pre-season was the time to try out new lineups to see if anything sticks. He's been a little slow on the uptake, but we are seeing some positive signs of growth for both our team and our coach. Seriously. We did just lose three games in a row. But we were a few lucky bounces away (FTs and crazy threes for Milwaukee, a missed layup in Cleveland, and a crazy last play in Chicago) from WINNING THREE ROAD GAMES IN A ROW.

This is something I've been struggling with for years now . . . do Craig Bolerjack and Matt Harpring even like each other? Some times during games you can get little hints and ideas that maybe they think each other is full of it. Some of their banter is forced, with Harpring always making fun of where Bolerjack went to college; and so on. But at other times . . . they appear as close as brothers. Checking out Moni's site is one of the highlights of my day. And I wanted to share this with you all. 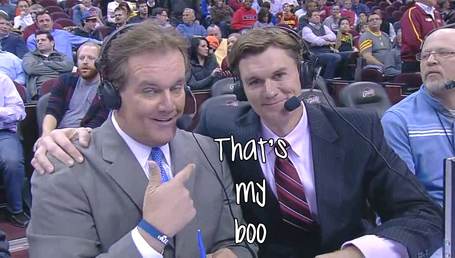 Do you know what Player Efficiency Rating is (P.E.R.)? Do you care? Well, it's a metric used that evaluates a player in a number of ways. A number of sites now show it; however, it's not without its' detractors. It's not perfect. I think we all agree with that. It seems to 'over-value' rebounds. As a result, we tend to see bigs get a higher score in PER than they should. That may or may not be the case with the Jazz though as our top level talent are all bigmen. According to PER right now 7 of our players are above average. Our top 4 players by PER are Al Jefferson (21.1), Paul Millsap (20.6), Derrick Favors (17.8) and Enes Kanter (17.7). Hmm. Well, I guess that makes sense because PER is supposed to weight rebounds higher and these are our best rebounders. And they are also our best players according to some. What about Win Shares? Well, in win shares the only difference is that Kanter's spot in the Top 4 is replaced by Gordon Hayward. Otherwise, we're still led by our bigs.

This is a nice problem to have, but it means that our lineups are very skewed. We may start our two best bigs, but the remainder of our starting lineup may actually be our 5th to 8th best players on the team. GOOD teams have their five best players also be their starters. We're not built in that conventional way, and I think even the easiest of looks can identify what the problem is.

It's not youth vs vets. It's not starters vs. bench. It's flat out talent imbalance between the positions. Jamaal has started 52% of the season for us, and he's not honestly a starter anymore. At times Randy and Marvin haven't played as well as they can as starters either, and both have started over 80% of the season. But it's not about starters -- it's about the talent disparity and distribution. That needs to change this off-season in my opinion. It's foolish to have all your eggs in one basket, and that's the essence of the logjam that so many people have tried to disprove.

Anyway, we have 20 games left in this season and we're up by 0.5 games in the standings over the Los Angeles Lakers. Because we have the tie breaker it's effectively 1.5 games ahead. Can we hold them off? Well, The Basketball Jones (Skeets, Tas, Trey, and company) have at it in their overdose podcast. I'd embed it here, but apparently I don't have enough brain power to figure that out. Please check it out Jazz fans -- these guys LOVE the Jazz and are quick to point out our successes. They are honest here, and way better at it that other national media basketball fans.

Okay, so yesterday the internets were aflame with the news that Travis Leslie, former Los Angeles Clipper draft pick and NBA-DL All-Star Game MVP, was being called up to join the Utah Jazz. I broke down his story here. The point remains that we don't know who is going to be cut from the team. Most likely it's going to be someone not in our future. And secondly, it's not going to be someone who is in our current rotation. Third, it's not going to be anyone expensive, you know, because the Jazz are penny pinchers.

Leslie is a SG, and the current SGs we have on our team are Gordon Hayward, Randy Foye, Alec Burks, and Kevin Murphy. Do we NEED another SG? Well, if we look at Gordon Hayward as a SF in the future, and Alec Burks as a back up PG in the future -- then you kind of do. If you look at those two guys are wings (no matter what), then the obvious point of improvement HAS to be at the PG spot (where 100% of our current PGs are free agents at the end of this year). I have absolute certainty that he Jazz aren't going to cut any of their bigs, so Al Jefferson, Paul Millsap, Derrick Favors, Enes Kanter, and little used Jeremy Evans is safe.

So by the process of elimination, that leaves:

Murphy is super cheap, and if you were going to cut someone, his contract would be the easiest to handle ($473,604), he also plays the same position as Travis. Alec Burks is a lotto pick and making a lot of money ($2.1m) -- but he's constantly crapped on by the Jazz' media, and he plays the same position as Travis. Earl Watson ($2.3m) has played like crap, and now with Mo Williams back he's the 3rd string PG, but can be replaced easily by Burks. Ultimately, Raja makes the most sense, but he makes the most ($3.48m). But the majority of that must be paid off by now ($2.63m by my simple maths), and he's not even with the team. He's taking up a roster spot. And he also plays the same position as Leslie.