Share All sharing options for: The Hard Choices Edition - The Downbeat - #1015

With three games remaining and the Jazz's last two games on the road, the game tomorrow could be Paul Millsap's last as a Jazzman. That's what the story line of the day is, at least, with questions along the lines of "Reflect on your time with the Jazz" being directed at Millsap at practice today. It's interesting to conjecture on what Millsap thinks of his time with the Jazz. His rookie year, the Jazz finished first in their division and made it to the Western Conference Finals. They were unable to get back there in the years that followed, but the Jazz always fielded a competitive team that played team basketball. At the same time, Millsap watched as his teammates, friends, and even coach were shipped out/let go/etc., one by one. Millsap is the only Jazz player on the team that was on the '09-'10 team, which was not so long ago and yet feels like another lifetime. As has often been mentioned, half of Millsap's teammates will also be free agents in a matter of weeks, if not days. What percent chance do you think these players will be back with the Jazz next year (not what you hope, but what you think management will do)? Al Jefferson Paul Millsap Mo Williams Randy Foye Marvin Williams (do you think he picks up his player option?) DeMarre Carroll Jamaal Tinsley Earl Watson Jerel McNeal

What are Boler and Harpring thinking? 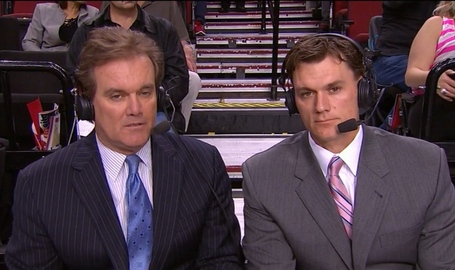 Timely upload from the great @JazzBasketball1 as the Jazz play a home and away against the Timberwolves:

Andrei Kirilenko turned in one of his classic fill-in-the-blanks performances with 20 points, 10 rebounds, 4 assists, 3 blocks and 3 steals in a 100-82 Utah Jazz victory over the Minnesota Timberwolves.

Which is more exciting at this very moment?