Note: Mylo's home planet needs him, so I'm filling in here late because I'm clearly insane and hate my life.

Share All sharing options for: The Downbeat #1018 - The "Canned Heat" Edition

Can you believe it? The Utah Jazz have played 81 of 82 regular season games so far. There's only one left. And depending on what happens between the Houston Rockets and Los Angeles Lakers -- no matter what our team does, it still could be the last game we play until the Orlando "No Clark and Amars allowed" Summer League. To me, even though this has been an emotionally draining, and philosophically frustrating season, is sad.

The bottom line is that we all love the Jazz. We're Jazz fans. The off-season is interesting, and exciting, but we're not really seeing our team play. We sometimes get international tournaments or pro leagues where we see our players play. But more than ever, with this team with all these free agents, they may not be our players for long. Furthermore, the players make up the team -- but they aren't the team.

We will miss seeing our team play. I know I really did during the lockout that happened months ago. Even a dysfunctional #MOLO Alfense of a Jazz team is still a Jazz team. And at worst, we only have one more game left. I'm going to try to enjoy it as best as I can.

With another season ending comes another bunch of end of season awards. No MVP, ROY, or MIP candidates on this team again. Just as we had no All-Stars, it's pretty obvious that we're not going to get any All-NBA players either. (So no Top 15 guys, or "stars" that you can build your team around) Of course, we're not going to be completely shut out of hardware. SB Nation's Tom Ziller wrote a fun post about "What your Sixth Man of the Year candidate says about you".

"I'm fully convinced that you could create a dating match service based around peoples' choice for NBA Sixth Man of the Year in 2012-13. eHarmony has its 2,000 questions; we have just one. And who you choose says so much about you." - T. Ziller

It's a fun little personality test that lists 17 different candidates for the award. Some are more serious candidates to win it than others, but he does mention Derrick Favors, Enes Kanter, and Gordon Hayward. You may be surprised with what your pick says about you. I know I was.

Al Jefferson is like the hardest person in the world to explain. He's a lovable person and class clown in the locker room. But he also went to court for not paying for work done on his car. He seems like a great mentor, but is slow to pick things up. His 'head game', footwork, and mobility are with many peers on offense, but seems a step or two slow on defense. He has great finishing ability but has taken more and more jumpers this year. He draws defense to him, but still takes contested shots. We're told all year long that we can't score without him -- yet we have a great winning percentage in games he doesn't play in, and his own on court / off court affect on the Jazz seem to suggest he's not invaluable.

His main talent is scoring, and in 224 games in Jazz uniform he's scored 35 or more points only twice. Ever. He's gone for 30 plus only 18 times in 224 games. On all three teams in his career, he's only scored over 30 a grand total of 39 times. That's 39 times in 638 career games. Does this mean he's mediocre at his best thing? We already think he's below average at the things he's bad at.

I tried to explain Al Jefferson to Preeti a few nights ago. She thinks I talk too much and need to be more concise, so I have to explain larger concepts in 3 sentences. I couldn't explain Al. Can you?

All of the guys the Jazz have paid this year who can play point guard are all free agents at the end of the season: Mo Williams, Jamaal Tinsley, Earl Watson, and Jerel McNeal. (EVEN Randy Foye!) Alec Burks has been forced to play point this year, but c'mon. Our insiders tell us he's not a PG so he's not. So let's move on. We may be in the market for a PG this off-season. We have a few methods to get one -- we can sign one or more than one as a free agent. We could draft one. Or we could, uh, trade for one. (Assets?)

We've been lucky as a franchise to have so many great PGs so as a result we may be a little too harsh in trying to evaluate future ones (same goes for bigmen scorers). We had Rickey Green, then John Stockton, then Milt Palacio, then Deron Williams . . . and even guys like Devin Harris and Mo Williams (two former All-Stars) are somehow not good enough for us rabid fans.

So let's look at history and see John Stockton's PER 36 minute stats for Points and Assists over his first decade as a player and see what makes him so special. 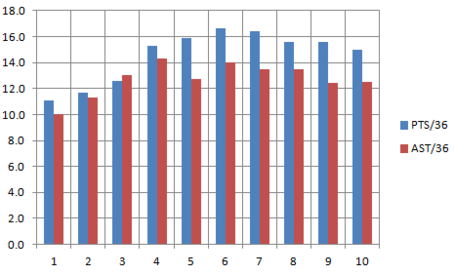 I guess John was pretty special. Especially when you see that he was ready to start in his 2nd or 3rd season, not his 4th. Do I think there's a Stockton out there for the Jazz to grab in the draft or in free agency? No. Of course not. But Jose Calderon 's career PER 36 numbers are 13 and 9. Not too shabby by comparison. Kirk Hinrich 's numbers are 13 and 6 (expiring deal in 2014). Those are Luke Ridnour 's numbers as well (his deal also expires next year).

And, uh, Myck Kabongo wears #12 . . . and with no teammates he still managed 14 / 5 PER 36 this year. We may not need a special guy to be our starting PG. But we need A guy for sure. And right now all of our PGs are off the books at the end of the season. Which, again, could be Wednesday.

We need a contingency. Maybe we can bring Stockton back?

I can't compete with MyLo and how fun he makes things. So . . . I'm putting this guy in the starting lineup. Show 'em what you got, kid!

Yes, This is "Canned Heat" by Jamiroquai