Share All sharing options for: The Downbeat #1028 - The "Playoffs, Media, and Dreams" Edition

Hey all, thanks again for making SLC Dunk a part of your day. It means a lot that you all seem to appreciate all of our content, opinions, and just plain zaniness. I know I've taken it a little easy the last few days (weeks? years?) and as a result the sure number of new posts has gone down. If we were in the playoffs you'd be getting lots of content every day. But we did not make it -- and really, we lost a lot of games this year (not just Game 82) that playoff teams don't lose. In a way, we kind of earned where we ended up.

That said, the playoffs are going strong right now and I don't think we've touched on it yet.

In the Eastern Conference:

In the Western Conference:

For those of you who want to keep score, the cumulative record right now between seeds 1/8, 2/7, and 3/6 is a whopping 14-2. This is why I feel like 'always making the playoffs' regardless of actual team quality and capability is a fool's errand. Instead of making yourself better you want to be the first one to run up there to get slaughtered. That's not how you win the title.

I'm happy that we didn't make the playoffs this year. We didn't earn it, so we shouldn't be there. And yes, if we did make the playoffs then SLC Dunk would get more page views, I'd get to write more articles,and I'd be on the radio more in national markets (funny, I've been on the radio so much more outside of Utah than in Utah . . . I wonder why that is . . . ). But I don't care about ME, I care about the TEAM. And not making the playoffs this year could actually force our team to try to get REALLY better instead of just slapping on another hole-ridden coat from the goodwill and try to say it's high fashion. (This is a vet free agent that no other playoff contender wants)

I'm also glad we didn't make the playoffs because, well, then it would be Big Al in this gif . . .

Super long time and loyal Utah Jazz fan Max Chang (@chang_max) is a great follow on twitter. If you prod him enough he may eventually reveal that he's a long-time insider who just keeps things to himself. (But a lot of that is off the record) One thing that he did disclose is that he got a chance to hang out with Craig Bolerjack who revealed something a number of us felt. 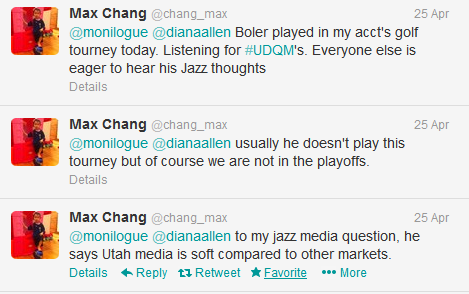 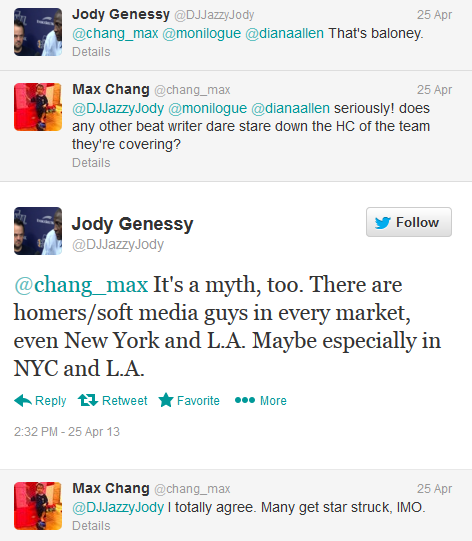 I think both statements can be true and are not mutually exclusive of one another. It's possible that all markets have soft media guys, but perhaps the distribution between the homer supplicants vs the Jim Grey types is more skewed here in the SLC Market? I don't know. That's just the way it may look to Boler -- and other people who may agree with his off the cuff remark.

If you missed it . . . the Jazz point guard Mo Williams had a funny exchange with the Nets ancient guard Jerry Stackhouse: 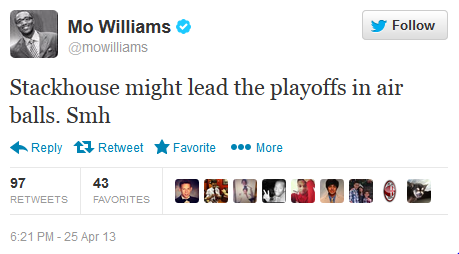 I like that Mo is still watching the playoff right now in the first place, your PG needs to know the rest of the league. The Suns forward Jared Dudley RTed Mo, and that got Stack to reply 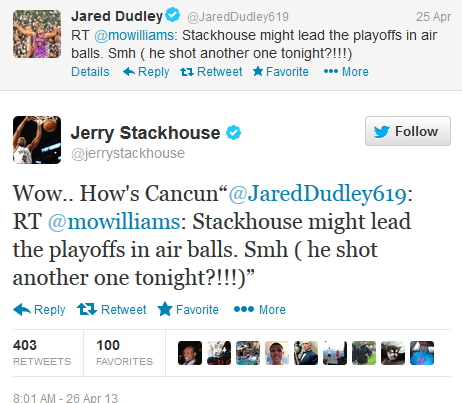 It's just hilarious. But they later made up, so it's all good. 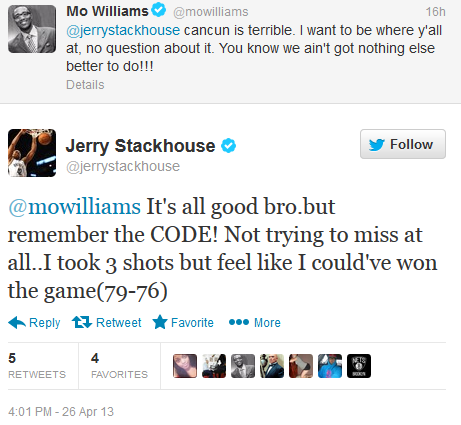 The underlying message here is that when you are a veteran, you are playing for the love of the game, and the ultimate desire of winning a ring. You want to be in the playoffs. And I know what you fans are all thinking -- #FreeKanter

I really don't do this enough . . . so I'm going to make an effort to link out to other people's stuff more frequently:

Some of you may be familiar with video games. My life is horribly busy, and the number of hours my console is turned on is a much larger number to the actual number of hours I have sitting in front of it playing. It's rare that I have the time I need where I can play games guilt free. (Single guys in your 20s -- enjoy it while it lasts) Well, the recent edition of 'The' NBA Basketball game (NBA 2K13 - where the 1992 Karl Malone has the 2002 Hairstyle) has a new feature that sucked up most of my time when I was actually playing it. It's called "MyTeam", and I think The Shums would be better than I to explain what kind of game it is. I think it's called a trading card game. You get 12 guys, a home jersey, road jersey, home court, head coach, and playbook to start with. And the more games you play and win, you get more points that you can then use to buy 'booster packs' (that have random things in it, some good and some bad) or just go out there and save up your points to buy a really good player.

When I first started this mode I felt like the goal was to get Stockton and Malone, and I'd be set. It's been very hard to actually do because the only way to get Stockton and Malone (because they are not active players) would be to get them in a random booster pack. During the whole process you (if you are good enough) you can get a really good team made up primarily from those booster packs -- which makes it easier to win games against other people online, which then gives you more points to use on booster packs.

At least it was for me who (months ago) got really lucky early on in the game and got a 23 year old Penny Hardaway (a gold level player) and he helped me dominate enough to earn enough points to get LeBron James. I was also pretty lucky that a few days later I got Dell Curry as well. Those three guys formed the core of my team when I played the game like normal people did. It stopped being fun because it was too easy -- and I lost track of my goal to get Stockton and Malone.

Well, two nights ago I finally got John Stockton (it only took 193 tries!), and I decided to stop playing the normal way (my starting lineup at that point in time was Mark Price, Penny Hardaway, LeBron James, Bill Russell, and Shaquille O'Neal) -- and play the Jazz way. Stock was the missing piece to get an All-Jazz team that could still win games.

I've played 7 games (5 min quarters) and these are their current stats (against other human competition).

So far I'm 7-0 (and that's even after going All-Jazz and getting rid of Gregg Popovich and replacing him with Tyrone Corbin), and this summer I'm going to try to play where I can and hopefully get Karl Malone on the squad. (Last game was against some loser using a starting lineup of Stephen Curry, Kobe Bryant, Kevin Durant, LeBron James, and Dwight Howard) 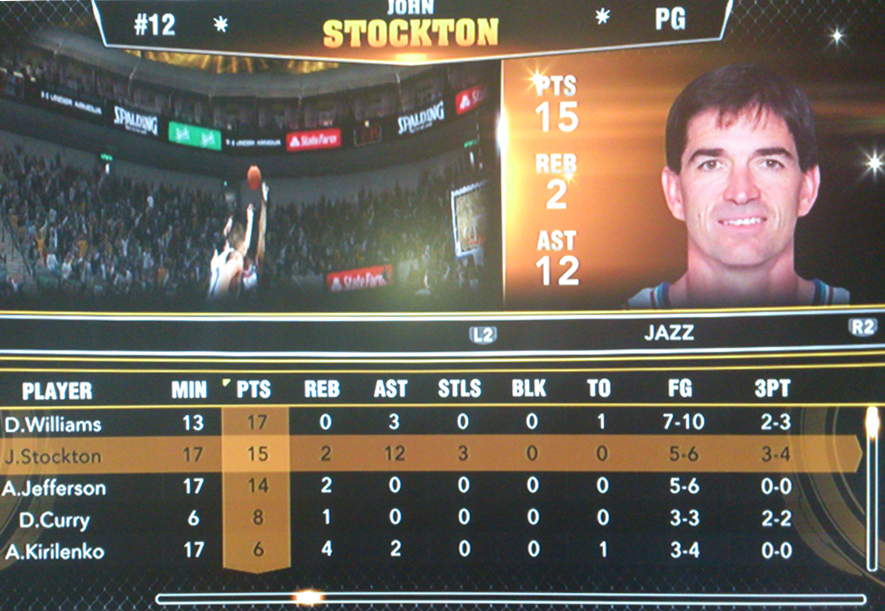 I apologize for the poor image quality, I'm not a photographer.

happening in the upper left part of this picture. Thanks, Comrade!

In the last 7 games, Stock has had 3 double doubles. So that's pretty cool. He makes everyone's lives so much easier as he gets into the lane so easily with his 99 Offensive Awareness rating, and 95 Ball Handling rating. His 99 Pass rating really has made everyone else have crazy good FG% so far.

How many wins would this fictional video game team win in today's NBA?