The Jazz Defense Can Be Entertaining Edition - The Downbeat - #MIX

Share All sharing options for: The Jazz Defense Can Be Entertaining Edition - The Downbeat - #MIX

Zach Lowe has written another must-read piece on the Jazz (for which Tyrone Corbin declined comment). Lowe takes a look at how the offense has changed in recent weeks and the Jazz's continued defensive woes, highlighting in particular the combination of Al Jefferson + Mo Williams.

Bottom line: This team just can’t defend, regardless of their strategy, and especially when both Jefferson and Williams are on the floor. Those are two very bad defenders at very important positions, and it would be difficult for any coach to build a top-10 defense around them. Of course, coaches control playing time and rotations, and construct overall schemes, and Utah has never had the five-man-on-a-string unity of the league’s better defenses. The Nuggets picked Utah apart last night on very simple plays, often leaving the Jazz looking strangely baffled.

Utah just hasn’t been good enough defensively in the last two seasons to be taken seriously as a playoff threat. That remains the case, even with San Antonio, still holding the no. 1 spot ahead of a monster matchup tonight against Oklahoma City, potentially missing Manu Ginobili for some or all of its first-round series. Corbin and Utah’s players, especially Hayward, deserve praise for Utah’s resurgent offense, and that offense gives the Jazz a fighting chance in any game against a top team; they took San Antonio to overtime just two weeks ago, after all. That offense also has kept Utah in the thick of a playoff race that looked only 10 days ago as if it might come down to the Mavericks and the Lakers. The Jazz have righted themselves, but only on one end of the floor. Until they figure out the other end, their ceiling remains woefully low.

Does the Jazz defense make you scream and cry and hate life? Now, it can make you laugh. For your eternal amusement and entertainment, via the wonderful memoismoney/@prodigyJF:

The hot button topic of the week seems to be why the Denver Nuggets are so far ahead of the Jazz in their rebuild retool Playoff push when the two teams traded franchise players (Carmelo Anthony and Deron Williams, respectively) at the same time. Per @jazzfernee and some others on Twitter, David Locke's answers include: 1) Danilo Gallinari is better than any piece the Jazz got in its trade (which include Derrick Favors, Enes Kanter, and Devin Harris); 2) Kenneth Faried is better than Paul Millsap; 3) system; 4) the Nuggets are more fun or have more of a fun factor that the Jazz don't have; 5) the Nuggets have a point guard. Tyrone Corbin's answer to this question when he was asked about it a few days ago:

You know, I don’t, I, they, their system has been there, with George Karl’s, been, he’s still there. I mean, they traded Carmelo, but they had, still had Ty Lawson, and that group has still been around. And, they just figured it out with their key guys. It’s, they kept, you know, Carmelo left, but they kept a lot of the guys that they’ve had, and they just running, and they added guys that fit what they, what they’re doing. So, you know, it’s just one of those things. They figured it out. I thought when they made the trade, I thought the group that came over at the end of that year, they kind of continued. They got better really quick. So that was a good fit. They’re somewhat experienced guys that came over, in [Wilson] Chandler, who came from New York, and [Danilo] Gallinari, who was playing from there, so they were used to being, playing. And so, they were able to just pick up and go, and the style fit what they were doing a little better.

I hope that clarifies it for everyone. (Note: Regarding "that group has still been around" and "Carmelo left, but they kept a lot of the guys that they’ve had": Lawson is the only current member of the Denver Nuggets that was on the team when the trade happened. Four of the current Nuggets were part of the trade; the remaining 10 players on the Nuggets roster joined the team after Carmelo was traded.) Yucca Man gives us some "non-cynical, non-bashing" reasons why the Nuggets should be ahead of the Jazz in rebuilding:

1. The featured parts of the Nuggets trade were players who had 3+ years of experience. They have already progressed through early struggles and were playing at a high level immediately. On the other hand, the featured parts of the Jazz trade were a 19-year-old rookie and two future draft picks. Just by virtue of the returning players/picks, the Jazz should be a couple years behind the Nuggets. 2. The featured guy of the Nuggets trade directly filled the hole left by the guy they were losing: they went from one strong SF with post-up skills (Melo) to a new strong SF with post-up skills (Gallo). Then the other guys coming in added nice depth to the team. Contrast that with the Jazz, who lost an All-NBA PG and gained a C/PF ... that hole represented by losing Deron Williams was NOT matched by the featured return and had to be filled by a temporary stop-gap player. Then the major draft pick was another C/PF. Because the positions of the incoming and outgoing players don't actually match, fully implementing the rebuild is going to take more work (and time) than the Nuggets' situation required. (That the Jazz rebuild inherently requires more moves and work, and yet it's the Jazz is the team that hasn't done a single further roster change focused on the rebuild since is simply incredible.)

Thoughts on Locke or Corbin or Yucca's respective takes? 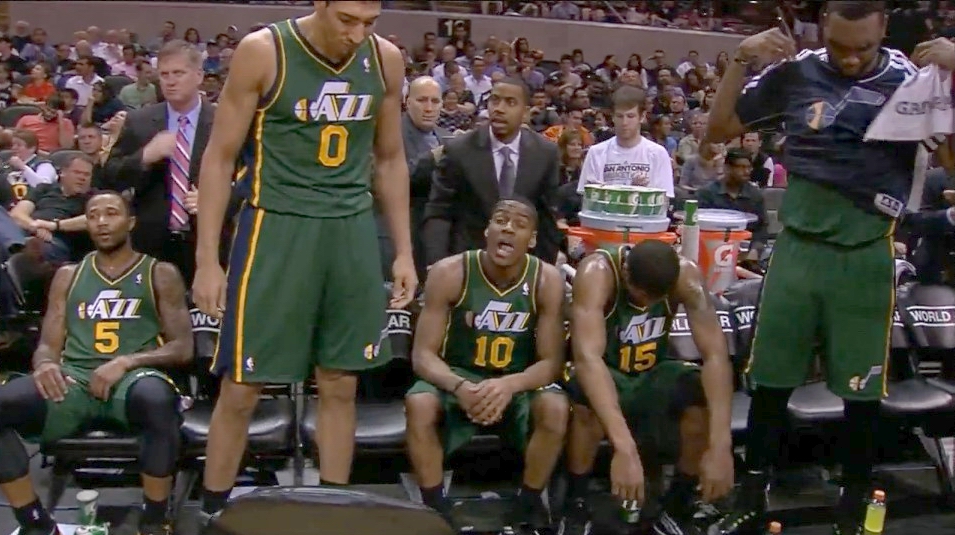 Give me your best "State of the Jazz" poem. Format and length up to you. Haiku, Dr. Seuss, limerick; all fair game.