Share All sharing options for: The Downbeat #1040 - The "So it begins" Edition

Today is the day that the Utah Jazz start their individual workouts in preparation for the NBA Draft. It's a big day, and it's a day that's starting much earlier than usual. In previous seasons our first workouts didn't happen until May 29th, and it's almost always AFTER the Chicago Draft Combine. But I guess not making the playoffs alters your schedule a bit.

What we know from previous years is that the Jazz a) like to bring back a number of guys a few times if possible, b) like to start off their workouts looking at second rounders (our strength in drafting), and c) focus the workouts on one position, but bring in other guys to play the different parts needed to better see how the 'main targets' of the workout play. For example, the Jazz were looking at bigmen when they brought in Dallas Lauderdale, JaJuan Johnson, Jeremy Tyler, and Markieff Morris all on the same day, but also worked out Norris Cole and Shelvin Mack to help set up the bigs. Or how a few days later they were working out ball handlers (Kemba Walker, Jimmer Fredette, Senario Hillman, Malcolm Lee) but still brought in a wing (Paul Carter) and bigman (Josh Harrellson) to set screens and cut. The Jazz are a smart team when it comes to evaluating players (which is hilarious when the Jazz owned media yells at fans for liking the players the team drafts, "How dare you cheer for Alec Burks; what confidence do you have for someone that we felt good enough to draft?"). Part of this evaluation is based upon setting up workouts where you see a group of peers against each other (like bringing in Jimmer and Kemba in the same workout), but also bringing in the complimentary players needed to help see the full range of abilities in a group.

We have that today with who the Jazz are bringing in for their first workouts:

So it's mainly looking at the three guards, with two bigs and a wing put in there to help evaluate. N.B. on the table I don't have everyone's ages (the ages are calculated to how old they will be on draft night, as you can imagine this is a slog to do for 150+ potential draftees), and the average draft score is based upon how the different websites ranked them last week. (CBS = CBS, DX = DraftExpress, ESPN = Chad Ford, HH = Hoops Hype, NBADI = NBA Draft Insider, NBADN = NBA Draft.net, SI = Sports Illustrated, but none of these players are on the SI list). Kabongo looks to be a bubble 1st round guy, but most have in early in the 2nd round. Wolters and Snaer are 2nd round guards as well. As stated earlier, the Jazz like to work out 2nd round guys first -- and they have a penchant for bringing guys back for second workouts. Utah isn't just looking at the draft, but they are looking at the Summer League roster and training camp too.

Another main takeaway is that all three guards (Kabongo, Snaer, and Wolters) are all rebounding guards. Last year our starting group of Mo Williams and Randy Foye were the worst starting backcourt for boards. Our front office knows this. It's nice to see them secretly acknowledge this is a problem by bringing in these dudes.

I am, of course, super biased here because I think Myck Kabongo is an amazing human being and would be a more than capable rotation player on a playoff team. I wouldn't hesitate to take him at #21 as his current low draft stock is a product of being 'out of sight / out of mind' right now in the minds of many list-makers. The list-makers also like to over rank European players because of that "unknown" quality. Kabongo, and I really believe this, will have his stock rise to be a fully fledged 1st rounder by the end of the individual team workout phase and the Draft Combine results. Why am I so confident about it? Well, it is simple. He makes you believe in him. He's smart, and has had a wealth of experiences for his young life from being an African refugee who changed countries a few times before his family moved to Canada. In candid interviews on sports shows he's praising God. (Even random cell phone videos on youtube) And, well, he's still a really good basketball player.

And for the Jazz, he would be that bench PG to help stabilize our second unit with his fundamentally sound offensive game of driving and dishing, and his quickness and length on defense. He does have flaws which I am well aware of (he's not strong enough for my liking, but then again, Tony Parker isn't as strong as Will Bynum either; and he didn't shoot as well from the FT line or 3PT line for my liking -- but those can improve, check out Mo Williams numbers from those spots in his last year in the NCAA) -- but from what I know of his personality from talking with people who do know him, he's a hard worker who is aware of his flaws as well.

The number one thing I admire about Kabongo is his mentality. The last few seasons we brought in a few losers with loser mentalities on the team and time and time again we saw them give up on plays. Kabongo gets pissed at himself for team failures. It motivates him. His post-High School All-Star game interview where his side lost (despite him setting some record for assists or something) demonstrates this. This season he broke his twitter hiatus to expound upon hating not being in the NCAA March Madness tournament -- even though it was more the fault of his crappy team mates, not him. Kabongo is a strong character, strong leader type who will mesh well with the other younger players on our team, mainly Gordon Hayward. He's also the type of PG who doesn't need the ball in his hands all the time to be useful on the court.

I think the Jazz know this, that's why they are using him as the litmus test with which to judge all the other ball handlers they see in individual workouts by. Wolters and Snaer are good players too, superior to Kabongo in certain areas -- but if Myck doesn't destroy them here, I would be very surprised. (Of course, we all need to take caution with falling in love with players; my record isn't any better than any NBA GM on this.) All that said, I don't expect the Jazz to draft Myck, they'll pass on him at #21 for whatever Euro guy falls to them (Kosta Koufos rule), and then he'll be gone when they pick again in the second round.

Karl Malone has career averages of 25.0 ppg and 10.1 rpg. He failed to average a double double 8 times in a Jazz uniform, over 18 seasons. In the time since Karl hung it up and now, there have been only FOUR instances where a Jazz bigman averaged a freaking double double. And all four were by Carlos Boozer. This is, I guess, what a good point guard can do for your primary scorer: get him easy buckets. But it's not just about being a sorer, you have to do your job on the glass as well. Big Al has gone for 20 and 10 twice in his career, and never gotten close in Utah. He's even less close to being a double double guy, in his first year here he averaged 9.7 rpg. It's been downhill every season since. We've gone from expecting 25 and 10 to be an "average" season to now trying to wrap our minds around a guy scoring 17 and 9 -- and having some people in the media suggest that they are worth the same to our franchise.

It's easier to be satisfied with the results of this team if you look at just the last 10 or 15 years, but some Jazz fans have that Animal Farm style long memory, and remember what it was like before the pigs took over. (I wouldn't normally have to explain this, but in the story pigs take over the farm, and I'm not linking the Jazz brass to pigs here - the link is in our memories, as we are the farm animals) We have a couple of young bucks on the team right now in Derrick Favors and Enes Kanter. According to the data from last season, had they both been given sufficient playing time, both would have been double double guys this year. So who is more likely in your mind to be the next double double bigman for the Jazz? And is it likely to have two guys do it in the same year . . . after such a long drought?

Denver Nuggets head coach George Karl was voted NBA's Coach of the Year, our own Tyrone Corbin did not receive any votes. Additionally, the Nuggets general manager Masai Ujiri won the NBA's Executive of the year award. The Jazz Kevin O'Connor receive two second-place votes despite, well, isn't Dennis Lindsey our General Manager now, and KOC some other, poorly defined, overlord position instead? Anyway, KOC got 13th place in this, so that's good.

But if you're keeping score, in the time since the Nuggets traded Carmelo Anthony, and the Jazz traded Deron Williams, they're three seasons out and their coaches and front office are winning awards while they are getting homecourt in the first round of the playoffs. They did lose in the first round of the playoffs -- but they were playing without Danilo Gallinari, so that's understandable. He's their first option.

I know the days of a larger rocky mountain rivalry are in our rear-view mirror, but it's hard not to see what Denver is doing and wondering why we're told that no coach could do better with the team, and that no front office is as good -- then why are the results not there? Is it the players? The players don't select themselves though, they are brought to the team by the front office and coached by the coaches. I guess this is part of why fans are so worried . . . if every part of the Jazz org is doing the best possible job in the NBA, then why are we failing? 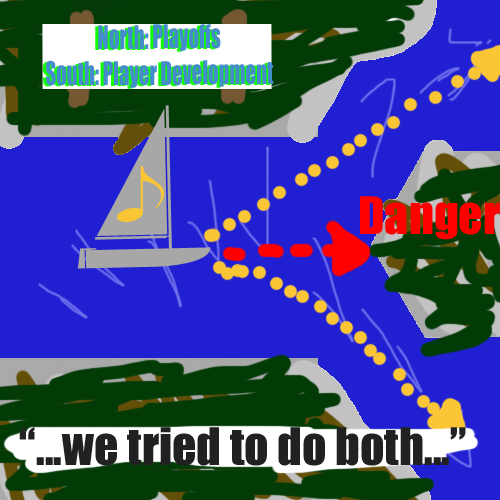 Maybe it's our mutually exclusive directions that are at fault?

And yes, I'm going crazy for Kabongo's workout with the Jazz. I hope he does his best, and wows them. I wish you all the best Myck; but for the sake of my team, I'd rather have you on our roster feeding our bigs than you on some other team making us look bad for not being able to keep up with your speed and decision making while we throw Jamaal Tinsley and Earl Watson at you.

And well, now we're really into the draft season.

Our predraft workouts have started.