Share All sharing options for: The Downbeat #1050 - The "We got a lot of work to do" Edition

First of all, lest this be recognized as the anti- Utah Jazz blog, congratulations to Al Jefferson for receiving 20 point total votes (119 people are voting in this), with 1 first place vote (those are worth 5 points each). It's a remarkable achievement for an individual who is a bigman who failed to shoot 50%, failed to grab 10 rebounds a game (no double double here), and did not get a chance to show his stuff in the playoffs (where he's actually quite good). I have more on the All-NBA teams coming up today, but congrats again to Big Al -- the only Utah Jazz player on the complete list (via NBA.com). No Mo Williams, or Paul Millsap, or anyone else. This is a star driven league, and it's important to have a star in order to do well when the games count the most. No, I don't mean the 4th quarter of a home game to an Eastern conference team on a long road trip; I mean in the playoffs. Getting All-NBA recognition is the first step to getting the respect from the league.

And kudos to Big Al for doing that. But we still need to get better. By this one metric Big Al was the #8th best center in the league (behind the hard to pin down Tim Duncan, Marc Gasol, Dwight Howard, Brook Lopez, Chris Bosh, Joakim Noah, and Al Horford), however that ranking is quite speculative. Some of the people voting were voting for guys who you would normally think are PFs (Bosh, but now a center in Miami at times), or that the general principle is dumb (Duncan is both a PF and a C whenever it helps him the most). Also according to this vote Big Al was ahead of Tyson Chandler and Roy Hibbert. I think those two guys are ahead of him in reality so Jefferson is a Top 10 center. In order to advance farther as a team I think we need our best player to be a Top 10 or Top 15 player for the entire league. Not just Top 10 in their position. Meh. We need to get better.

And I think many neutral NBA writers (aka not Jazz employees) feel like we can get better. The NBA's Sekou Smith just wrote an article trying to predict the future All-NBA team for the 2015-2016 season. I'm going to spoil it a bit here by saying that he does have a member of the much maligned street gang "The Core Four" on it. And I don't mean on the honorable mentions list -- he has a C4 member being an All-NBA player. (Which almost assumes an All-Star spot, as there are more All-Star spots than All-NBA Team spots) I think that kind of potential is what our scouts saw in these players, even if the Jazz run media wants to take a dump on them all day long. (How sad is it that we've gotten to the point that the most honest assessment we get about our team comes from national sources?)

"F Derrick Favors, Utah Jazz: Favors has been on a steady climb since moving into a starting role for the Jazz after Al Jefferson and Paul Millsap departed the premises during the free-agent summer of 2013. A no-frills performer who avoids the media glare at every turn, Favors has a hard time doing the same on the court. The league’s leading rebounder in each of the past two seasons (15.3 this season), Favors also averaged 16.3 points, 3.4 blocks and 1.9 steals for a Jazz team that battled all the way down to the last week of the season for the eighth and final spot in the West. He finished third in the voting for the Kia Defensive Player of the Year award and is living up to the hype that suggests he might be a young Dwight Howard." - Sekou Smith, NBA.com

Yep. Sounds about right. This is actually getting better, and hopefully Favors too knows he has work to do to get there.

Last night Jeremy Evans was putting in work too. He knows he has to get better. Of course, it wasn't on his ball handling or his jumper. It was at Electronic Art's latest FIFA game. (No doubt, the Gordon Hayward influence) 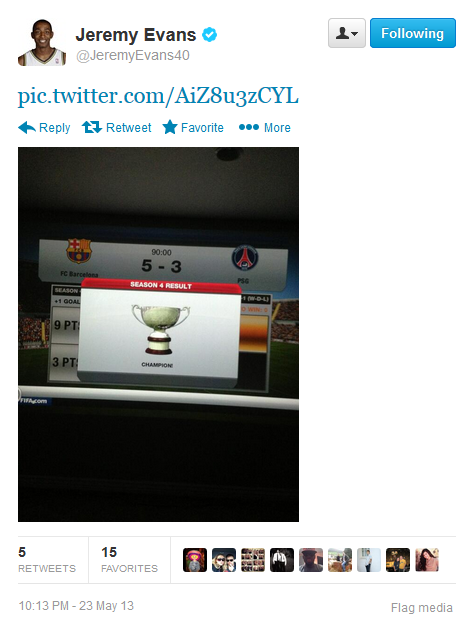 Congrats to Evans who is making quite the trophy collection for himself. (Also this whole tweet by Evans sparked a cool convo between Andy Larsen, of Salt City Hoops nee SLC Dunk, and I.) All that said, I'm glad at least Jazz PR is letting Evans twitpic his trophies, instead of Enes Kanter.

I can't believe the season is over. I think we all do love the Jazz so much that we elect to spend so much of our free time thinking, talking, tweeting, and posting comments about for the majority of the calendar year. I know that for me writing approx 400-3000 words an article, for every article, some of which come at the frequency of 5 a day, leaves me a little empty inside when there are no more games to watch. It sucks that the last two seasons the Jazz have been in a tailspin, and as a result, a lot of fans have been very vocal about how they feel. Sometimes this leads to clashes of opinion and personality. I don't think that's a product of the inherent quality of people who root for our team; rather, it's just the frustrations of having less than successful seasons that makes us easier to be pissed off.

At the end of the day, though, we're all Jazz fans.

And we do love our Utah Jazz.

Check out this great video by TheUtahJazz1Fan on Y/T

Our players have a lot of work to do - NONE of them were All-NBA players, and as a player, you want to be one of the best. You have to work for it though. But it's not just them. Our front office has a lot of work to do to with the NBA Draft happening in a little more than a month from now, and free agency starting a few heart beats after that.

Our media can get better.

But most of all, most directly for me, it's this blog. I think I can do a much better job. I think our readers (and detractors alike) could stand to read / watch / listen to better content. And the last few off-seasons I've kinda taken it easy. You know, the 'taken it easy' where we've averaged 4.3 Posts per day all across July, August, and September.

We have content down. I want to work harder and be better able to reward everyone who writes here and visits here with a higher quality from me. And reward everyone who writes here and visits here with increased variety of content, with the end goal of always getting SLC Dunk to the forefront of team specific blogs. I have a lot of work to do too. But the response we received from going to the NBA Draft combine has encouraged me that this is something we are capable of providing to fans (an inside look), and it is something fans want to see more of.

There are going to be changes here for the better. And some changes for the worse. Over all we want to be the best. You've no doubt heard that Andy has progressed in his craft that he was made an offer we all supported him in taking to be part of TrueHoop's extended family. We also have our own big announcements to make later on this summer too.