Share All sharing options for: The Downbeat #1051 - The "Defense" Edition

I don't know how closely you are following the NBA Playoffs since the Utah Jazz did not make it. But here's a quick refresher: the four teams left are the San Antonio Spurs, Memphis Grizzlies, Miami Heat, and Indiana Pacers. The final four of the NBA isn't always the four best teams -- this is the case with the NCAA as well. But they are the teams that win at least 8 playoffs games in the same season. Let's go a bit farther back and look at the final four of the NBA for the last 20 years.

As you can see, some of the same teams keep popping up.

Not all of these teams have actually won the ring though. In fact if you look down the list the teams that get to the final four the most have star power, a great defense, or both. The teams with the great offenses and star power seem to falter in the ultimate goal (Phoenix, Utah, Seattle, New Jersey, Milwaukee).

So I guess if your main deal is to build a championship team you need some stars to help you win the close games and you need good defense. The Miami Heat have their hands full with the Indiana Pacers (tied 1-1 right now with the next 2 games in Indy). Miami plays great defense too, but here we see that defense can be the equalizer. The Pacers don't have the stars that Miami has but they have the players and system to win games against the super impressive Heat. In fact, Indy could be up 2-0 at this stage as the first game went into overtime. I'm going to break down the offense, defense, pace, and success rate of all of these 20 years worth of NBA Final Four teams after this season is over.

But right now our current Utah Jazz team is both starless, and oriented towards the wrong half of success. We need to improve our defense. We seem to look at one problem every off-season. We had rebounding problems then got Derrick Favors and Enes Kanter. We had three point shooting problems and then got Mo Williams, Randy Foye, and Marvin Williams. We have defensive problems now. I really think that's what our team is going to address this off-season.

Why? Because despite some of the evidence, at times it really does look like our team is still trying to win a championship.

A big part of that is our pick and roll defense. In today's game it's really hard to defend super quick guards. It's even harder when they allow the teams that have quick guards who are marketable to set illegal screens. (I know, we don't talk about this enough -- watch some vintage Celtics with Kevin Garnett and Rajon Rondo) That doesn't mean you shouldn't try to help things out.

There are three things we have to look at on defense here:

If you looked at what Tony Parker and the Spurs did to us two years ago our major breakdown was that last part -- we kept their spot up shooters open and guys like Danny Green killed us. If you look at what Chris Paul and the Clippers do, or what he admits to be doing, is that he 'attacks the slower guy, always'. So that if they run P&R and Big Al is there, he's going right at Big Al.

The problem we don't seem to have on the P&R defense is the screen setter going off on us. On Pick and Pops we see this more and more with the increased confidence bigmen have from midrange . . . but for the most part in today's NBA the pick and roll is just used to set up guard penetration for either a layup, a foul, or a drive and dish to spot up shooters.

We need competency at all levels of this breakdown. We need quicker guards. No disrespect to Mo Williams, Jamaal Tinsley, or Earl Watson -- but only one of you were ever considered as someone who could play defense, and that was most recently 3 seasons ago. All of them are past their physical peaks, and that's partly why the Jazz sent at least 9 guys down to the Chicago Draft Combine (not a media event) to look at the 10+ PGs there. Some of the Pgs (even the guys who would go to the 2nd round) showed they could move out there. Some of them even had crazy wingspan too; Lorenzo Brown, Michael Carter-Williams, Myck Kabongo, C.J. McCollum, and Dennis Schroeder all had wingspans of at least 6' 6.25". It would be an upgrade from Mo Williams' 6' 5.5" span, and only Jamaal Tinsley's 6'7.5" was notable for our guards. And Jamaal is going to be 36 before the trade deadline next year.

Speed and length can only help if you have the will to actually play defense. Some of these guys at least looked like they cared. Kabongo was actually yelling at his team mates to be in the right position on the court, and was taking charges and steals out there. His shot isn't there, but you could do much worse with a 2nd rounder than him.

What about our bigmen? Well, none of the bigs in this draft look to help our pick and roll defense. A lot of that is just, honestly, going to have to be addition by subtraction. Any on the court / off the court metric available shows that Al Jefferson was a problem for the team he played for -- and not a problem for the other team to deal with. This year we saw better pick and roll teamwork defense from DeMarre Carroll and Enes Kanter than we did from our starters. I think if we play these wild dogs more on D we'll see better results (as long as Carroll doesn't try to go for the steal on every play). I'd drop some Synergy Stats here but Big Al isn't even in the play most of the time he's involved in a P&R so much so that the synergy computers list another Jazz player as the defender.

Yeah, it's so bad that the scouting metrics look at Big Al as scenery in Synergy. And not as someone in the play.

And that brings us to the next problem . . . we have to rotate better as a team. Some guys don't rotate because they don't want to get dunked on. But if you just 'give up' on plays we should just give up on having you on the team.

The common thread for all those Final Four NBA teams is that they at least all played average defense. The teams that did great played much better than average defense. I think we're planning on playing average defense next season. Even David Locke is going on long form posts to talk about defensive improvements. Can we just say Al is gone? It's probably going to be the biggest reason our defense gets better. And don't say we'll miss his scoring. Teams that get rid of high usage, low efficiency scorers do just fine. Ask the Memphis Grizzlies who are in the Western Conf Finals after trading away Rudy Gay. (And no, guys, Big Al is not the Zach Randolph of our team, he's the Rudy Gay.)

Uh, So many words! Here's a picture of Mo William's kids and his younger brother playing basketball! 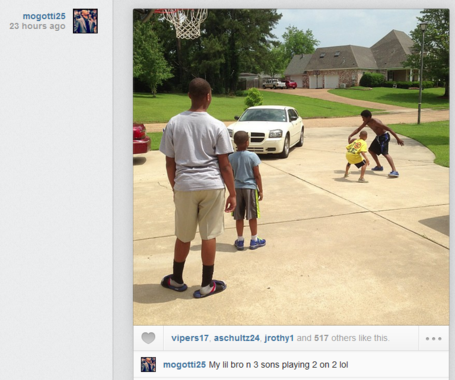 And here's former Jazz player Andrei Kirilenko and his son getting really high. 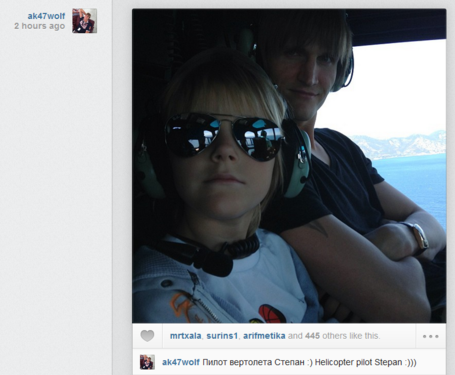 Isn't social media great? We get direct access to the players and get to see what they're really like without the filter of PR people telling them what not to do. (Like when some kid took video of Deron Williams doing crazy flips off of some cliffs in Utah)

Some guys play hard. And some others are still working hard.

Wow, totally ripped PG who has wingspan and communicate on defense -- and has no tattoos? Who is this guy?

I wouldn't be mad with that . . . but it's a highly unconventional draft strategy . . .

Okay, so it's almost June -- what's the big story in Jazzland so far this off-season?