The Downbeat #1088: The Opportunity Cost Edition

Share All sharing options for: The Downbeat #1088: The Opportunity Cost Edition

The Jazz's second Orlando Summer League matchup, this one against the newly be-Dwight-ed Houston Rockets, didn't go nearly as well as the first. Utah lost 85-71, only winning one of the game's four quarters in the process. (Although that did deny the Rockets the first all-four-quarters clean sweep of the competition, so...yay?)

Here's the Jazz side of the box score for your perusal (click to embiggen): 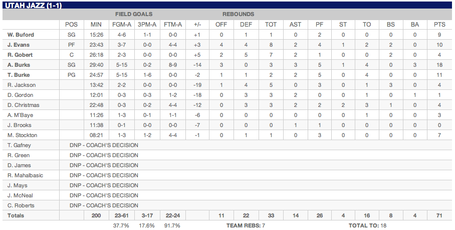 The good news: Alec Burks, who was doubtful to play after spraining his ankle on Sunday, scored 18 points and solved the free-throw woes Amar underlined in Tuesday's Downbeat -- for one game, anyway. Rudy Gobert was also active, scoring four points (one an emphatic dunk) and grabbing seven boards to go with two blocks. And Jeremy Evans had a nice line of 10 points, eight rebounds (one that included a leap the Orlando announcers labeled "jet-propelled"), two assists and two blocks.

The bad news: Trey Burke had another poor shooting effort, going 5-15 from the floor for 11 points, with two rebounds, two assists, four turnovers and five fouls.

The good news again: The four turnovers notwithstanding, Trey made smart decisions with the ball, and (most of) the shots he took were good, open looks. I have faith that he'll knock 'em down when he gets comfortable.

Rumors circulated before tipoff Tuesday that Raul Neto had received FIBA clearance to take part in summer league activities with the Jazz. That has since been confirmed, though not in time for Raulzinho to suit up against the Rockets:

Raul Neto has been cleared to play in Summer League. He will not play today but will be able to practice and play going forward. #JazzSummer

The Jazz are slated to play the Nets in Wednesday's first game, tipping off at 9 a.m. Mountain time, so we won't have to wait long to see how Neto looks on the court. In fact, if the game's going on right now, you should stop reading and go watch it. Seriously. Go. Now.

By now you've probably read Zach Lowe's recent commentary on the flurry of trade activity between the Jazz and the Golden State Warriors. While granting that Utah's front office made a wise decision to move into full-on development mode, he questioned the price they paid to do so:

Depending on how you value second-rounders, Utah spent something like $10 million apiece on two first-round picks, one of which — Golden State’s 2014 pick — will likely fall below no. 20. That is a high price, especially since Utah could have fielded a playoff contender by using its cap space to chase Jeff Teague (almost unwanted in Atlanta, sources say), re-signing Paul Millsap, and filling out the rest of the roster with bit players.

Lowe followed up this analysis with a footnote in a Tuesday article. A snippet:

There is an opportunity cost to every transaction, and the Jazz paid a giant sum - most of their cap space - for first-round picks that are likely to be very bad. There were other alternatives, and some alternatives that haven't emerged yet. That's the value of keeping cap space open during the season, and especially at the trade deadline. ... Utah didn't make a bad deal at all, especially not considering their priorities. But they paid a giant price for bad picks, and they closed themselves off to other things.

Kevin Pelton tweeted a similar thought soon after news of the deal broke:

Now that Jazz fans know the term "salary floor" they need to look up the phrase "opportunity cost."

We debated this idea a bit in our Video Roundtable Chatstravaganza on Monday night. It's an impossible evaluation to make right now, since as Lowe points out, any possible alternative deals hadn't emerged (and never will now, barring multiverse-altering fluctuations in the space-time continuum).

We all agree that this is the direction the Jazz needed to go -- stacking assets and giving the keys to the young'uns, even at the cost of winning in 2013-14 -- but did they have to move so quickly? Was the Warriors deal the best one on the table? Could others have arisen later this offseason, or even at next February's trade deadline, that would have made more sense? I'm not sure.

Personally, I like the fact that Dennis Lindsey and the new-look Jazz front office moved so decisively. Aggressive roster decisions keep other teams honest and willing to deal. And I'm not that concerned about the price tag. Fact is, Utah will never be a top destination for free agents, so if we have to overpay for assets we CAN control (draft picks and trade pieces), then so be it. That's life as a small-market team.

But maybe a more patient approach would have allowed the Jazz to take advantage of another team's desperation later on. Maybe the opportunity cost was indeed too high.

The night the Warriors trade news broke, the SLC Dunk staffers exchanged a lengthy email thread of reactions (most of which involved trying to talk Diana off the proverbial ledge once it became clear that the deal meant renouncing the rights to Paul Millsap).

In trying to explain the trade, I likened it to a specific transaction that Oakland A's general manager Billy Beane made during the 2001 season chronicled in the movie Moneyball. (The film's account is somewhat fictionalized and differs from the book, but the lesson is instructive.) I've since seen this analogy used by other commenters here on the Dunk, too, so I'm not the only one that noticed the similarity.

The short(ish) version: Billy Beane has built his roster with certain players who excel at getting on base, even if they have other flaws. Scott Hatteberg is one such player, a converted catcher now attempting to play first base. Art Howe, the A's coach, insists on giving another player, Carlos Peña, the starting job at first. While Peña is initially a better first baseman than Hatteberg, Beane feels Hatteberg fits better with the team's long-term vision and needs the experience more. Eventually Beane forces the issue by trading Peña, leaving Howe no choice but to play Hatteberg.

But I do think that the acquisition of players like Richard Jefferson and Andris Biedrins -- who are both past their primes and of limited use at best -- is a clear sign from the Jazz front office that it is time to find out how good Gordon Hayward, Derrick Favors, Enes Kanter and Alec Burks really are.

Up to this point, a case could always be made that, at least during the 2012-13 season, players like Al Jefferson, Paul Millsap, Mo Williams and Randy Foye "deserved" more court time than their younger counterparts, by virtue of experience or more polished ability or consistency or whatever. They were the Carlos Peñas to the Core Four Hattebergs. That gave Corbin and the Jazz organization a certain level of plausible deniability, which manifested in talk of soggy cookies and Stockton playing behind Rickey Green and the ubiquitous refrain of "getting better."

Whether you believed that line of thinking or not, it's gone now. No rational mind can justify playing R-Jeff and Biedrins over Burks and Kanter. There is no safety net any more, no excuse for giving them fewer minutes, no older, more experienced players to bar the way.

The Youth Movement is on, and what's past is prologue.

I've already nattered on too long in this here Downbeat, and I don't want to navel-gaze, so I'll keep this one short. But I figured I ought to say a word to those who might not know me, and reacquaint myself with those who do.

While I've been a member of the SLC Dunk community for a long time, it's been several years since I've taken an active role here (for numerous reasons I won't bore you with). I'm thrilled to have the opportunity to do so again.

I'm not a statistician like Amar or Andy or Clark. I'm not a capologist like Peter. I'm not as good a scout as MyLo. I'm nowhere near the storyteller that Yucca is. And my fandom doesn't quite manifest itself as passionately as Diana's.

But I love the Jazz. And I love SLC Dunk and its community. And if I can do anything to make it better, I will.

I'll be handling the Downbeats on Wednesday for the immediate future -- they won't all be this long, I promise -- so if there's a topic you'd like to see covered, a community issue you want addressed, or any feedback at all you want to give, let me know, and I'll be at your service. Get at me on Twitter @theshums, or email me anytime.

It's good to be home.