The Downbeat #1115 - The "Not quite next season yet" Edition

Share All sharing options for: The Downbeat #1115 - The "Not quite next season yet" Edition

Is it training camp yet? Let's ask our rookie bigman Rudy Gobert! 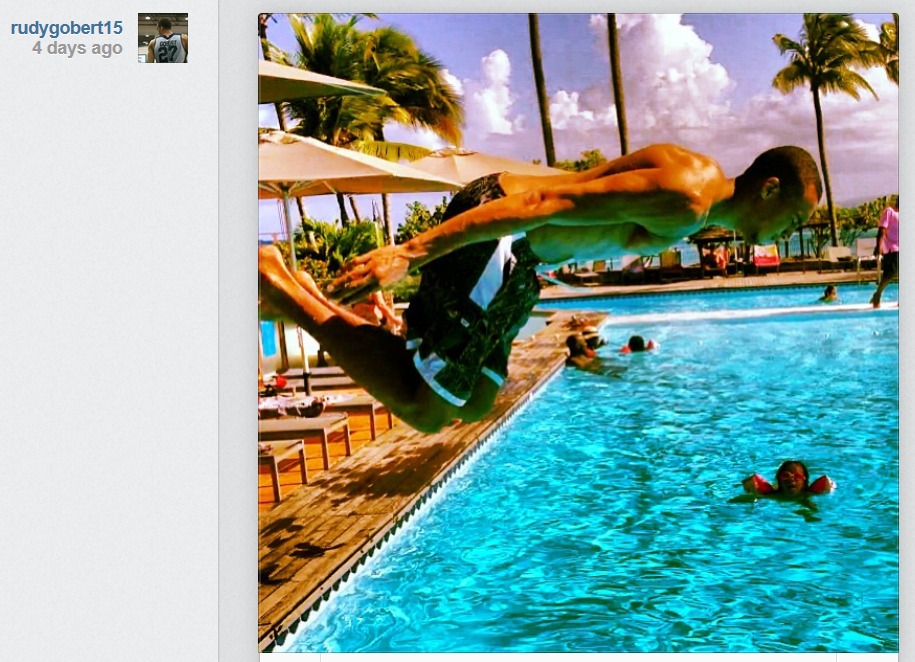 Nope. Not training camp yet.

The fan in me wants the next season to start asap, but the realist in me understands why we have some good things to wait for. The first, well, is that I'm not ready for the season to start. Here we have some cool stuff happening that we're not quite ready to drop yet.

But for the Jazz . . . we have so many new faces (Trey Burke, Rudy, Ian Clark, Brandon, Andris, Richard, John Lucas III). Younger guys will be put in new roles (Derrick Favors, Enes Kanter). Some older guys are still nursing injuries (Marvin). Kanter is probably pigging out right now having finished a session in Ruston, LA with Karl Malone (and Ramadan). Rudy doesn't even have his work papers in order yet so he couldn't even go to the NBA Rookie orientation and photo shoot.

Our coaches have to work on a new strategy that will be ready to go from Sept 1st onwards. Guys are still in vacation mode for our team.

The season will eventually come, and then we'll be filled with Jazz into to write about. Until then . . . maybe we all should take another long look at summer before holding our breath for fall. Just ask Rudy.

Andy Larsen had a great find on a Trey Burke story:

It's a touchy-feely article about this relationship and hardly contains any numbers at all. (Looks like Andy did get something from his blog-mom Diana after all -- even if it is recessive) I think that if you want to know more about where Trey Burke is coming from, or specifically where he came from, you should read it.

A few weeks ago, Trey watched a family video of a kid, probably 3 or 4 years old, throwing a legendary fit after being tagged "it" in a game of duck-duck-goose.

Trey’s better at concealing his emotions now. The stage is bigger, the consequences are greater. Still, inside his 20-year-old body is that same little kid who couldn’t stand losing at duck-duck-goose.

I am going to end this segment, not with how competitive this kid is, but with how fun it's going to be having a U of M player on the team again. (We really haven't had one since Rickey Green, Glen Rice doesn't count) The end goal is to have a U of M, Mich St., Oakland, Detroit-Mercy, and maybe even a CMU kid on the team. At least then the Palace would be less empty for Jazz / Pistons games.

Anyway, check out the article here, it's by Everett Cook (@EverettCook) who prob has heard about how crazy I was from Neal R., whom I met at the NBA Draft in Brooklyn.

I love this article at HP by Jack Winter (@ArmstrongWinter). You should read it, he looks at GH and some of his peers. Here's an excerpt:

Our perception of Hayward’s merit differs wildly compared to his counterparts’: George is the bonafide superstar, Leonard following Tim Duncan’s footsteps, Butler a fearless two-way force, and Barnes the hyper-athletic marksman. These are the game’s prototype ‘three-and-D’ guys, players that not only impact both ends of the floor, but do so at multiple positions while filling multiple roles, too.

But circumstance matters here as it does anywhere else. Barnes, Butler, Leonard and George were afforded the opportunity to shine in front of a national audience during the postseason. That each of them took advantage and drastically outperformed their regular season selves is certainly commendable. They wouldn’t be where they are now had they played any differently.

Instead, they’d accompany Hayward on the list of youngsters that face promising but indeterminate futures. But this group’s playoff chance was had and fulfilled, cementing their spots among the league’s young hierarchy in the process. Hayward didn’t get his last season and likely won’t this coming one, either. So we’ll have another opportunity to forget him again, unless he takes that salient leap from supporting to stardom during the regular season.

But the funny thing is . . . is that this is pretty much something we've talked about for months at this site and written thousands of words about (from contributors, to fanposts, and to all the comments about these posts). But, hey, I can't except Rinehart to read everything written about the Jazz online. It just looks like he found out what a blog is a few days ago because he finally followed Matt Moore (@HPBasketball) recently.

Joking aside, I think National writers will be writing more and more about the Jazz this upcoming season. And so will we. There are a few surprises in store for casual observers of our team. One of them is going to be how good our under the radar guys are. But our players, like our blog, have been working hard for the moment they are observed under the microscope. It took longer than it should, but our youth will be the focus of the team. Good things come to those who wait -- and I think our Jazz youth will have very good things this season.

Jack puts it as Gordon's lack of overt affection from fans and writers is partly due to a lack of exposure. He's not seen in big games, so his game isn't seen as big time. But it is. He's surprisingly good, even for those of us who have watched every minute of his career. As for Mr. Rinehart -- I hope he keeps reading blogs. There are some surprisingly good things here too.

The Utah Jazz traded with the Golden State Warriors back on July 10th, 2013. It's now August 10th, 2013 -- and last night Brandon Rush finally took a flight to Salt Lake City.

Wheels up! Off to Salt Lake City ✈✈

He landed without incident and then commented on the weather. The point of this section is that the trade has been in the books for a month and we're finally getting a local look at him. I think as the season goes on Rush, his role, his production, and what he has left in the tank, will all be very big story lines. I'm happy to have him on the team, but he presents to us a lot of questions.

We've had a plethora of 'vets' in their last year of their deal or on a one year deal show up to Utah in the last three seasons and either disrupt progress, or produce on their own parlaying their time in Salt Lake as a short term stint onto 'greener' pastures on some other club. I don't need to list them all but guys like Randy Foye and DeMarre Carroll come to mind. They didn't join the Jazz as free agents because they were going to stay here.

I wonder what the future holds for the Jazz and Rush. Is he just here to work for bargaining chips for his next contract, one he'll sign on to play with another team? Or is there more to this arrangement?

How Rush performs this year will go a long way towards figuring out if this GSW/DEN//UTA deal was a win for the Jazz or a move just based upon the future. I think Rush has something to prove, not just because he's a vet (e.g. non-rookie contract) in the last year of his deal. He's coming off of a significant surgery and rehab period that kept him out of all but two games last year. (He was still only 10 points off of Andris Biedrins total 2012-13 scoring output -- this is not a joke or hyperbole, this is a fact, Andris scored 24 points all last regular season.)

If Rush is able to display solid three point shooting, sufficient defense, and that certain je ne sais quoi that veterans have that gets our head Coach's fire burning, then he has a solid chance to start for this team.

For everyone's sake I hope Rush has a great season and stays hot AF. Personally, I'd love for Marvin Williams to be our best non-young lotto guy. But realistically Rush may have more to play for this year. Either way, we're bound to get some capable veteran outside shooting from these two, Richard Jefferson, and John Lucas III. Does it make up for all that Mo Williams and Randy Foye brought from the outside? Time will tell.

I think there are five really big pieces of our team this upcoming season. Yes, Trey Burke, Alec Burks, Gordon Hayward, Derrick Favors, and Enes Kanter are going to be important. But I'm not thinking about them. I'm thinking about John Lucas III, Brandon Rush, Jeremy Evans, Rudy Gobert . . . and Andris Biedrins.

In the best case scenario I feel like only 2 of these 5 guys have productive seasons. (I want to be wrong, so I'm under-estimating it here) If I was a betting man I'd put money on Evans being ready to contribute, and Rush being ready to move past his injury lost season. In my opinion Rudy needs more experience before he can be counted on reliably, and right now that's experience he doesn't have. Lucas will show flashes, but he's not Chauncey Billups. He's not going to be a steadying anchor for us. Andris? I wish him the best but I don't know if his confidence will ever come back, especially if he's getting punked by 3 guys in practice every day who are younger than him . . .